The total electricity shortage in the country has hit 623 million units, surpassing March figures, according to a report. Here's a list of states facing power crisis.

According to a LocalCircles survey, 2 out of 3 households in the country have admitted to facing power outages.

Amid the rampant rise in power demand due to the prevailing heatwave and the worst electricity shortage in more than six years due to lack of adequate coal supply to thermal plants, several states in the country are now experiencing power outages for multiple hours.

According to a LocalCircles survey,  2 out of 3 households in the country have admitted to facing power outages.  While 1 in 3 households are facing outages of over 2 hours or more each day. 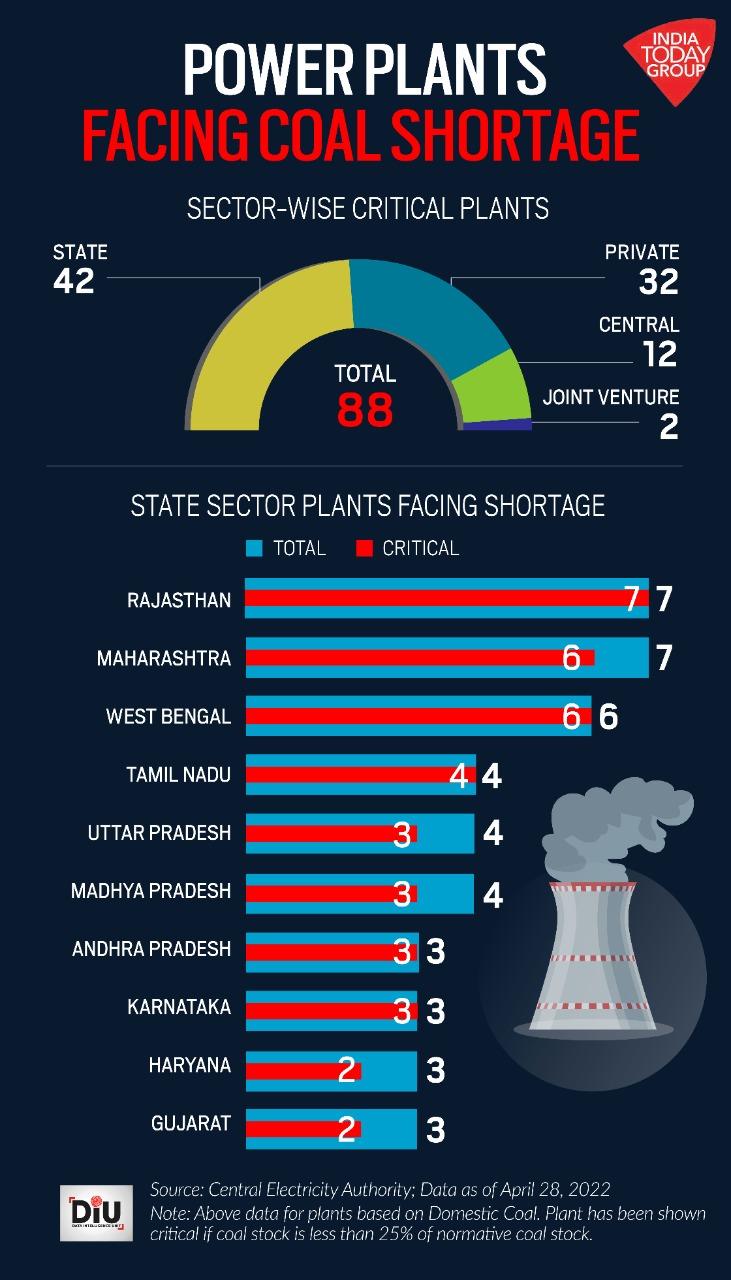 The Railway Ministry had cancelled hundreds of trips to ensure priority routes for coal wagons and faster turnaround. While Coal India Limited (CIL) has ramped up coal production by 27.2 per cent during April.

The maximum temperature in Delhi has been hovering between 42 to 46 degree celsius over the past week. With the mercury shooting up in Delhi, the power demand crossed 6,000 MW mark in April, discom officials said.

The Delhi government has warned of supply disruptions citing shortage of coal stocks at various power plants. However, the power ministry maintained that a total capacity of 6,892 MW was available for Delhi and there was no shortage of supply to the capital.

Haryana Chief Minister Manohar Lal Khattar had said on April 26 that the problem of power cuts in the state will be resolved soon and assured that his government is taking measures to ease the situation.

"Uninterrupted electricity will be provided to citizens of the state. For this, permanent measures are being taken by the power discoms. The problem of power cuts in the state will be resolved soon," he said, according to an official statement.

Amid rising temperatures, the Haryana government has changed the timings of government and private schools from May 4. The schools will start from 7 am and will run till 12 noon.

Uttar Pradesh has a 3,000 MW deficit. Against the demand of around 23,000 MW, the supply is just 20,000 MW, resulting in load shedding in rural areas and smaller towns.

Uttarakhand is no exception with long power cuts. UPCL (Uttarakhand Power Corporation Ltd) MD Anil Kumar attributed the acute power shortage to a rise in demand caused by the early onset of summer and to the closure of a gas-driven power plant in Kashipur in Udham Singh Nagar district.

According to the state Energy Secretary B Sridhar, the current crisis, which was a nation-wide phenomenon, might ease by the end of April.

Bihar too is witnessing frequent power cuts in rural as well as urban areas.

"Bihar is facing a power deficit of 200-300 Mega Watts (MW) per day because of the sudden increase in demand. The state's consumption is around 6,000 MW per day and the availability of power from different sources is 5,000 to 5,200 MW only. However, almost every day we are purchasing around 600 MW from the power exchange at higher rates for our consumers in the state," Sanjeev Hans, Secretary of Energy Department (Bihar), said.

Paddy sowing season is yet to start in Punjab but electricity consumers are already facing unscheduled load shedding at many places in the state. Several areas, including Ludhiana, Patiala and Mohali are facing frequent power cuts. The maximum demand for power has already reached around 8,000 MW in the state.

In Rajasthan, the electricity demand has increased 31 per cent, leading to power cuts of 5 to 7 hours a day. Rural areas are facing more power cuts than in urban areas.

Last Friday, Kerala Electricity Minister K Krishnankutty rejected reports of the state facing any major power crunch, saying there was some shortage in the availability of electricity but that would be resolved soon.

His reaction came a day after a 15-minute long load-shedding was imposed in the state by the Kerala State Electricity Board Limited (KSEBL) following a shortage in the availability of power from the central pool.

Jharkhand has also been facing power outages over the past few days.

Jharkhand Chief Minister Hemant Soren has admitted that the state has not been able to meet the peak demand and additional funds have been made available to procure electricity from the market.