98-year old chanawala facilitated in UP's Raebareli for being 'atmanirbhar'

Raebareli's Vijay Pal Singh sells chana or boiled chickpeas to earn his living; The Uttar Pradesh government felicitated the man for his self-reliance at this age 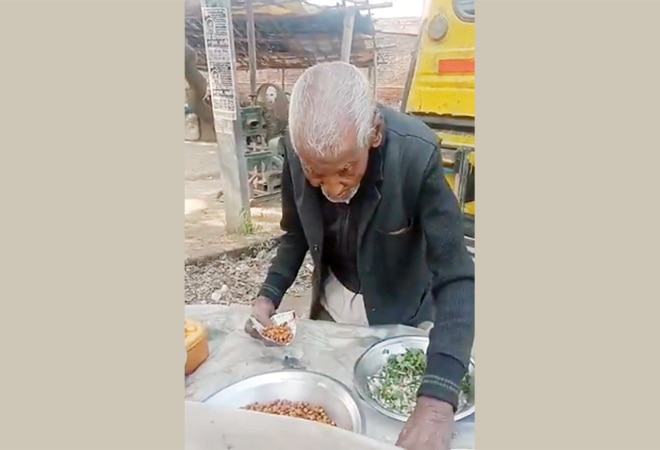 In the one-minute-long viral video, Singh can be seen preparing a serving of chana while in a conversation with a customer

Prime Minister Narendra Modi's 'Atmanirbhar Bharat' clarion call struck a chord with Raebareli's Vijay Pal Singh. The 98-year old sells chana or boiled chickpeas to earn his living since he does not want to be a burden on his children and to avoid becoming physically weak.

In the one-minute-long viral video, Singh can be seen preparing a serving of chana while in a conversation with a customer. When asked about his family, Singh says it is a big one. He added his son lives in Delhi but the son's wife and daughter live in the village.

He also goes on to say that his son sends money but that's barely enough to make ends meet and that whatever he earns from the chana stall adds to the family income.

Watch | 98-year-old Vijay Pal Singh from Uttar Pradesh's Raebareli was honoured by the district administration for being self-reliant and independent at his age. He sells chana or boiled chickpeas on the streets pic.twitter.com/gNnf4jOgIV

"Baba has a gram shop. He was called here. He already has a house under the PM Awas Yojana. Here the Patra Grahasti card and other support was provided to him. He is a source of inspiration for all of us. He hasn't set up a shop under any compulsion but because he remains self-reliant which is a good message. All of us aspire Baba's blessings," District magistrate Vaibhav Shrivastava told DNA.

The Uttar Pradesh government felicitated the man for his self-reliance at this age. The District Magistrate of Rae Bareli Vaibhav Shrivastava handed over Rs 11,000 cash, stick, shawl, and a ration card to the nonagenarian.

Also read: From #WomenInScience to #LockdownRecipes! Top topics women talked about on Twitter

Coronavirus-hit Maha economy to contract by 8% in FY21: Economic Survey 2021