Bala Box Office Collection: Film critics believe that if film Bala continues at its current pace, Khurrana could be looking at his next blockbuster 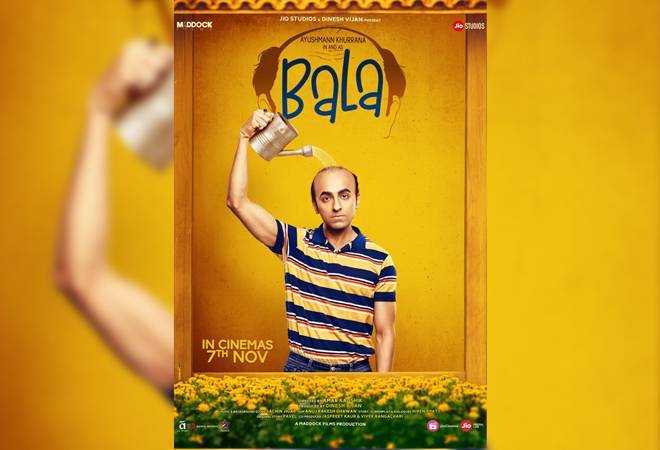 Bala Box Office Collection: Ayushmann Khurrana's latest comedy film Bala has become his biggest opener to date, with a net collection of Rs 10.15 crore on Day 1. His last film, Dream Girl, raked in Rs 10.05 crore, while 2018 hit film Badhai Ho had earned Rs 7.35 crore. With no other big releases scheduled for this week, film trade analysts expect Bala to do well in weekdays too. The film's three days earning is expected to cross Rs 40 crore mark -- Rs 10.15 crore on Friday; Rs 15.73 crore on Saturday and Rs 15 crore on Sunday (estimated). Though actual numbers for Sunday are yet to be out, Bala could be Khurrana's third film to cross the Rs 40 crore mark in three days.

Helmed by Stree-famed director Amar Kaushik, film Bala has received unanimously positive reviews with critics praising the 35-year-old actor for his performance. The film also features Bhumi Pednekar and Yami Gautam, both of them has worked previously with Khurrana in Dum Laga Ke Haisha (2015) and Vicky Donor (2012). Bala is produced by Dinesh Vijan and features Ayushmann as a Kanpur man who is suffering from premature baldness.

Bala is Ayushmann Khurrana's third film of 2019. The national award-winning actor has delivered two hit film--Article 15 and Dream Girl this year. Film critics believe that if film Bala continues at its current pace, Khurrana could be looking at his next blockbuster. In fact, Ayushmann Khurrana, in one of his interviews told PTI that Bala is one of his "most precious" scripts to date. "I'm humbled with the response and delighted that I have again backed a film that has its heart at the right place," he added. Bala was released on November 8 in 3,000 screens in India and over 550 screens overseas. With this, Bala has become Ayushmann Khurrana's biggest release to date.