The strategically significant 465-km railway line will be the world's highest when complete and is scheduled to be operational by 2022. 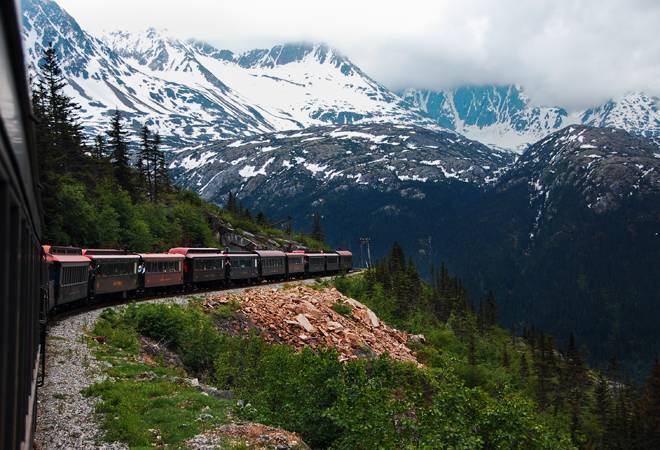 Move over Qinghai-Tibet Railway. By 2022, India hopes to snatch the record for the world's highest railway line. At a height of 5,360 metres above the sea level, the 465-km Bilaspur-Manali-Leh broad-gauge line is one of the four crucial rail lines that the Indian Railways is building to fortify the country's border with China. Tourists, too, have a lot to look forward to since this all-weather railway line will halve the travel time between Delhi and Leh to 20 hours. Currently, the Manali-Leh road is closed for almost five months a year due to snow.

The first phase of the survey for this massive project has been completed and the final location survey, a precursor to actual construction, is scheduled to be completed by March 2019. Here are 10 other interesting facts about this proposed engineering marvel:

ALSO READ:Indian Railways to hire 4 lakh people in the next two years

1. Initial estimates peg the cost of the Bilaspur-Manali-Leh line at Rs 83,360 crore. This is the most difficult project undertaken by the railways, which wants it to be declared a national project since the railway line will help the armed forces as well as lead to the socio-economic development of the region. The advantage here is that a major chunk of the project funding will be borne by the central government.

2. The project will include 74 tunnels, 124 major bridges and 396 minor bridges, according to the first phase of the survey. In fact, 52% of the 465-km length will pass through tunnels, the longest of which would be 27 km long. The line will also boast India's first railway station inside a tunnel - the Keylong railway station in Himachal Pradesh.

3. As many as four mountain passes - Rohtang La, Barlacha La, Lachung La and Taglang La, ranging between 3,976 mts and 5,360 mts - will be connected by this line. The highest railway station on this line, and globally, will be the Taglang La railway station reportedly at 5,359 mt above sea level.

4. The Railways plans to use aircraft-like pressurised coaches in its trains for this line - another first - to maintain the oxygen levels. This is to ensure that passengers do not face breathing difficulties on board given the high altitudes covered in the journey. Such coaches are currently used only in China's Qinghai-Tibet Railway Line, with its highest point at an altitude of 5,072 mts.

5. The coaches will also boast heaters since the temperatures in winter can fall to well below freezing point.

6. Last year, the railways proposed to start work on the 51-km long section between Upshi in Himachal Pradesh and Phe in Leh immediately. This stretch boasts a gentler gradient compared to the rest of the project and is expected to take two years for completion at an estimated cost of Rs 5,000 crore.

7. The line, once completed, will connect important locations between Bilaspur and Leh like Sundernagar, Mandi, Manali, Keylong, Koksar, Darcha, Karu and other important towns of Himachal Pradesh and Jammu & Kashmir en route.

8. The Indian Railways has reportedly sought help from the US for satellite imagery to survey the route and will also use the Lidar method for an understanding of the geology of the entire route.

9. When complete, trains on Bilaspur-Manali-Leh line will run at a speed of 75 kmph. It will reduce the distance between Delhi to Leh from the present 40 hours to 20 hours.

10. The other three strategic rail lines are Pasighat-Tezu-Parsuram Kund-Rupai that would stretch for 227 km, North Lakhimpur-Bame (Along)-Silapathar ( 249 km) and Missamari-Tenga-Tawang (378 km). The construction of all the four lines is expected to cost more than Rs 2 lakh crore.

ALSO READ:Railway passengers take note: Services of these 22 trains have been extended

No decision yet on next CBI chief; panel to meet again