The IMD has warned of a possible cyclone called Nisarga in Maharashtra and Gujarat on June 3, Wednesday.  IMD added that the cyclone Nisarga would have a speed of  105-110 kmph, which would bring heavy rainfall in the city 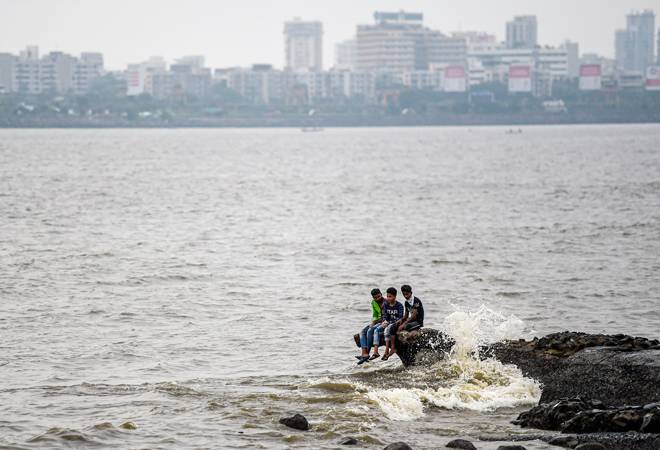 Nisarga cyclonic storm to make a landfall in Mumbai on June 3 (Photo: PTI)

The Brihanmumbai Municipal Corporation (BMC) has said that it has taken all precautionary measures in Mumbai to ensure zero casualties during the impending cyclone.

The Indian Meteorological Department (IMD) has warned of a possible cyclone called Nisarga in Maharashtra and Gujarat on June 3, Wednesday.  IMD added that the cyclone Nisarga would have a speed of  105-110 kmph, which would bring heavy rainfall in the city. The cyclone warning has come at a time when Mumbai is already reeling under the coronavirus epidemic. The city has registered 40,877 COVID-19 positve cases, and 1,319 have died, as of June 1.

Against this backdrop, Mumbai  Municipal Commissioner Iqbal Singh Chahhal urged Mumbaikars to avoid stepping out from home, standing under trees, and electric poles. "Officials from all 24 wards in Mumbai have been instructed to identify potentially hazardous and low-lying settlements in their wards and evacuate citizens to nearby schools or safer places". The BMC also requested fishermen and others not to venture into the sea for at least 3-4 days.

Further, the  BMC directed industrial establishments and petrochemical companies to keep their systems and materials safe. It further added, "Hospitals in Mumbai should take care that the generators are operational and that the power supply should be maintained uninterrupted".

Union Home Minister Amit Shah, on Monday, also reviewed the preparations in Maharashtra for cyclone Nisarga. The Home Ministry has deployed 16 teams of the National Disaster Response Force (NDRF) in Maharashtra including coast guard, navy, Mumbai fire brigade. Ten units of the NDRF have been deployed in vulnerable districts, while six others have been kept on a stand-by. The NDRF is aiding the state government in evacuating people from low lying coastal areas.

Additionally, Maharashtra Chief Minister Uddhav Thackeray on Monday apprised Shah about the steps taken to tackle the approaching cyclonic storm. Thackeray said shelter homes were prepared for those who wanted to shift to safer places.

Thackeray added that non-COVID hospitals will be made available for those needing medical assistance. Further, adequate precautions were being taken to safeguard chemical and atomic energy plants located in coastal Palghar and Raigad districts.

Coronavirus impact: CBO estimates US economy to reduce by $15.7 trillion