Delhi rains: Road caves in near ITO after downpour; nearby house collapses

Delhi weather update: No casualties have been reported so far. In the video people can be heard confirming that the house, located in Anna Nagar, was vacated 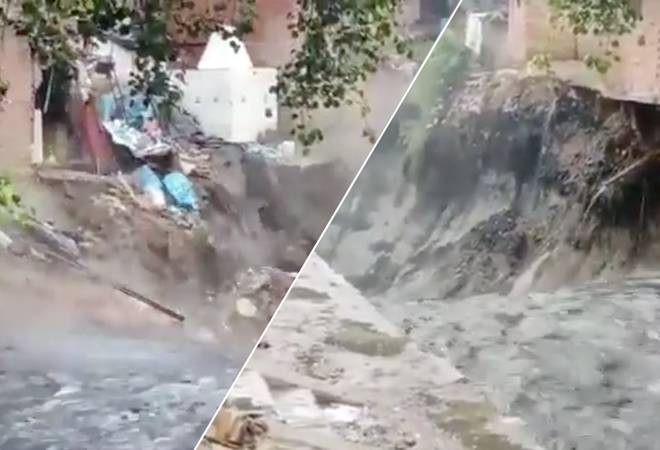 A stretch of road Delhi's Anna Nagar near ITO collapsed after just a couple of hours of rainfall on Sunday morning. In a video that has since gone viral, one can see a huge sinkhole which used to be a road at one point. Water can be seen gushing in from the areas nearby into the hole. One can also see a house nearby. People can be heard asking the residents to vacate the house, as they predict the house is moments away from collapsing inside the sinkhole.

The house then crumbles into the hole like a deck of cards. No casualties have been reported so far. In the video people can be heard confirming that the house was vacated.

Following the collapse of the house, the Centralised Accident and Trauma Services (CATS) and fire engines rushed to the spot.

No, it's not Bihar, this is our national capital New Delhi after merely two hours of heavy rainfall. One person drowned at Minto Road, houses washed away in sink hole near ITO, neck deep waterlogged streets. It was supposed to be a ' world class city'!#DelhiRains#DelhiDrownspic.twitter.com/y4QA6OfCbA

Meanwhile, in a separate incident, a person was found dead under the Minto Bridge. The deceased has been identified as 60-year-old Kundan. "The deceased was driving towards Connaught Place this morning when he tried to maneuver the vehicle through the waterlogged underpass. However, he couldn't succeed and it seems like he died of drowning. There are no external injury marks on him," said a Delhi Police statement. Inquest proceedings have been initiated.

BJP MP from North East Delhi Manoj Tiwari questioned the Kejriwal government over the condition of Delhi roads. "If this is the condition of Delhi roads after a couple of hours of rains, what will be the situation when the rains continue for months? Kejriwal ji, first rain of the season has revealed your poor preparedness... Prepare a concrete plan to deal with the forthcoming rains so that Delhi can be saved from drowning and people do not have to suffer," he said.

According to the IMD, heavy rainfall was reported in many parts of the city from 5:30 am to 8:30 am.