Eros Now in eye of storm after double-meaning Navratri posts; apologises after backlash

Eros Now Navratri posts row: Twitter users said that these creatives offended their sentiments. Some said that it made fun of festivals such as Diwali and Navratri 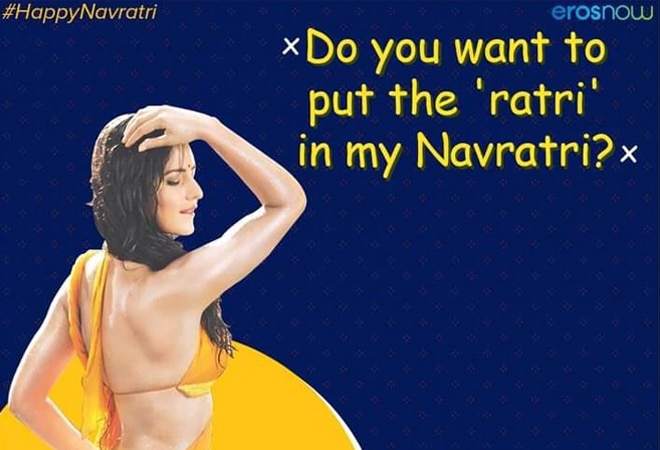 Eros Now was caught in the eye of the storm after a few of its Navratri social media posts -- laden with innuendoes -- ruffled a lot of feathers. As a result, #BoycottErosNow started trending and the company received a lot of backlash for its posts. The company took down the concerned posts and apologised but the damage was already done.

Eros Now has been sharing clips and pictures from films produced by them since Navratri began. Deepika Padukone from Bajirao Mastani, Aishwarya Rai Bachchan from Devdas, Kareena Kapoor from Ra.One, Madhuri Dixit from Devdas, Sonam Kapoor from Prem Ratan Dhan Payo, Sridevi from English Vinglish, Sonakshi Sinha from Happy Phirr Bhag Jayegi are some of the Bollywood stars to make it to their posts.

While all were in good fun, a few ended up offending people. In one, Katrina Kaif, can be seen clad in a yellow saree. In the background are the words, "Do you want to put the 'ratri' in my Navratri?" 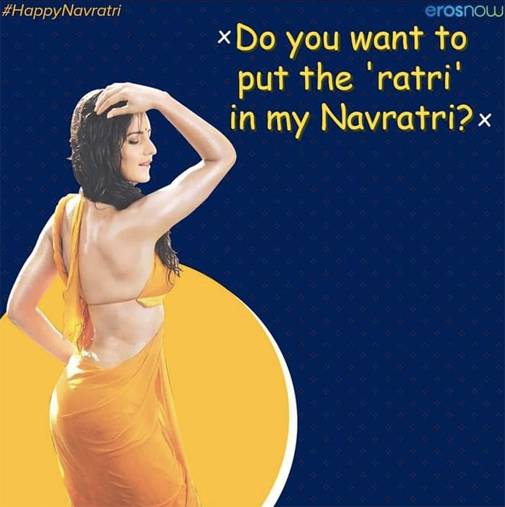 In yet another one that has been shared on Twitter, a beaming Salman Khan can be seen next to the words, "You need a dandi to play dandiya - I have one". In another one that has offended people, Ranveer Singh can be seen with these words in the background: "Let's have some majama in my pajama." Singh's photo was shared by Eros Now with the caption, "Be naughty, sweet toh mithai bhi hai". This is one of the tweets that have since been deleted. She also went on to bash the "international streaming platforms" for their content. She said that all content in these platforms are "overtly sexual, deeply gruesome brutal, violent content". Ranaut went on and said it is important to watch movies with your families. "Community viewing enhances our awareness when we know someone is watching what we watching we want to be who we want them to think we are, we make conscious choices, censorship of what we feed our brains n emotions is very important and censor can be our own conscience as well," she said.

Twitter users said that these creatives offended their sentiments. Some said that it made fun of festivals such as Diwali and Navratri. Twitter users called for a boycott of Eros Now and asked fellow users to block the handle. Some even trended 'Erase Now' as a pun on its name.

After the backlash Eros Now took down the offensive posts. In a statement, it said, "To all those concerned, we at Eros love and respect our cultures equally. It is not, and it has never been our intention to hurt anyone's emotions. We have deleted the concerned posts and we apologise for having offended anybody's sentiment. Thanking you, Team Eros Now."

However, users have slammed them and said that the apology is not accepted.