IPL 2020: 'It was a matter of one six,' Rahul Tewatia on Rajasthan Royals' dramatic win

IPL 2020:  Rahul Tewatia played a magical innings for Rajasthan Royals by scoring 53 runs (7 sixes) off 31 balls. He was finally out in the last ball of the 19th over and after that Jofra Archer (13 not out) and Tom Curran (4 not out) took the Royals home 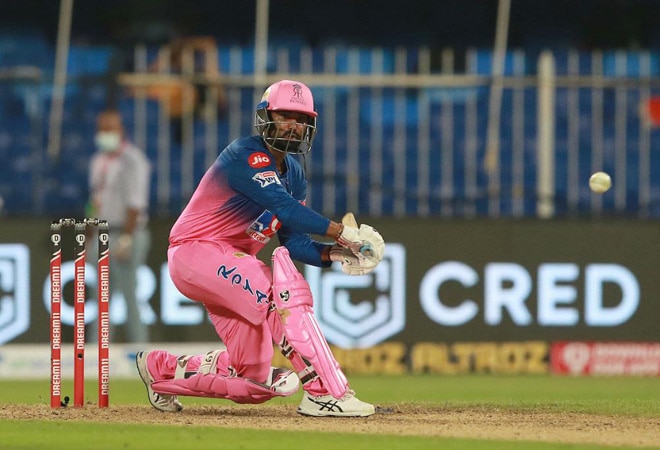 Rajasthan Royals (RR)'S Rahul Tewatia has emerged as the hero of yesterday's IPL match, after the 27-year-old all-rounder surprised everyone by hitting five sixes in an over at the fag end of the match, beating Kings XI Punjab by four wickets.

Chasing a stiff 224 for a win, the Royals needed 51 runs from the last three overs and it seemed the fate of the match was already sealed but Tewatia turned the match on its head in a dramatic fashion, taking 30 runs from Sheldon Cottrell in the 18th over.

Tewatia played a magical innings for RR by scoring 53 runs (7 sixes) off 31 balls. He was finally out in the last ball of the 19th over and after that Jofra Archer (13 not out) and Tom Curran (4 not out) took the Royals home.

It was the highest successful run-chase in IPL history, bettering the earlier record which also belongs to Royals, who had hit 217 while chasing 215 against erstwhile Deccan Chargers in 2008.

"That was the worst first 20 balls that I have ever played. I was hitting the ball very well in the nets, so I had a belief in myself and kept going. I was not hitting the ball well initially, I saw in the dug-out, everybody was curious because they know that I can hit the ball long. I thought I had to believe in myself. It was a matter of one six, after that, I got going. Five in an over went amazing. Coach sent me to hit sixes off the leg-spinner, but unfortunately, I didn't hit him. Ultimately, I hit off the other bowlers," Tewatia said after the match.

Reacting to Rajasthan Royal's victory, the International Cricket Council (ICC) tweeted that it rained sixes in Sharjah as Tewata and Jofra Archer pulled off an unbelievable heist.

Prior to that onslaught, Rajasthan Royals required 51 off 18 deliveries – they've won with three balls to spare 🤯 pic.twitter.com/nglADX3PJn

Yuvraj Singh, who has a record of hitting six sixes in six balls in the 2007 T20 World Cup tweeted, "Rahul Tewatia, thanks for missing one ball".

Mr @rahultewatia02 na bhai na 😅 thanks for missing one ball ! What a game congratulations to rr for a spectacular win !!! #RRvKXIP@mayankcricket great knock @IamSanjuSamson brilliant !

They kept their cool and accelerated beautifully.

Surprised how the @lionsdenkxip fast bowlers didn’t bowl many yorkers and also failed to use M Ashwin enough. #RRvKXIP#IPL2020pic.twitter.com/f52wF11uig

What a roller coaster of a game. Congrats @rajasthanroyals for such an incredible chase. U guys were magicians tonight. Hard luck @lionsdenkxip Time to look forward & be positive.Many more games to go. Great lesson on Never writing any one off🏏#Mayank#Tewatia#Pooran#RRvKXIP