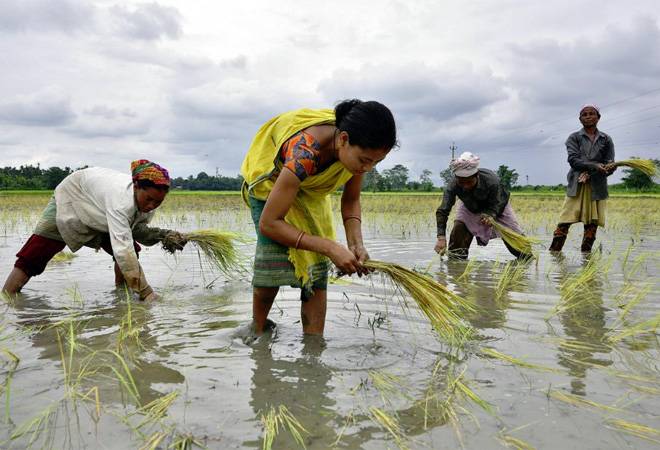 Monsoon rains are crucial for farmers who plant cane, corn, cotton, rice and soybean in June and July, with harvests from October.

Monsoon rains have covered most parts of cane, cotton, and soybean fields in western India and some parts of rice-sowing areas in central and northern India, the country's weather office said on Tuesday.

After a limp start, the rains have covered nearly half of the country, a weather department official told Reuters on Monday.

A shortfall in monsoon rains has narrowed to 37% of the long-term average against 44% between June 1 and June 19, the office said.

Conditions are now favourable for the southwest monsoon to further advance into Gujarat, and a few more parts of Madhya Pradesh and northern states of Uttar Pradesh and Uttarakhand, the weather office said.

Monsoon rains are crucial for farmers who plant cane, corn, cotton, rice and soybean in June and July, with harvests from October.

Nearly half of India's farmland lacks irrigation and the monsoon season delivers about 70% of the country's annual rainfall - key to the success of the farm sector in Asia's third-biggest economy.

The agriculture sector accounts for about 15% of the country's $2.6 trillion economy, but employs nearly half of India's 1.3 billion people.

The India Meteorological Department defines average or normal rainfall as between 96% and 104% of a 50-year average of 89 centimetres for the entire four-month season beginning June.

Poor rains have delayed planting of summer-sown crops, but experts say crop yields could be robust if rains pick up in the next two weeks.

Water is typically scarce in the summer months, but the situation has been particularly grim this year in western and southern states that received below-average rainfall in the 2018 monsoon season.

Farmers have planted summer-sown crops on 9.1 million hectares, as of June 21, down 12.5% compared with the same period a year ago, according to provisional data from the Ministry of Agriculture and Farmers' Welfare.

Cotton sowing was down 12%, while soybean planting has lagged by 57% during the period.

India is the world's biggest exporter of rice and the top importer of vegetable oils.

India imports about 60% of its vegetable oil needs at an annual cost of up to $10 billion - its third-biggest import item after crude oil and gold. A drop in oilseed output could lift the country's imports of edible oils such as palm oil, soyoil and sunflower oil, dealers said.

The water resources minister on Monday warned that a water shortage could cut food exports from India, which has emerged as a leading supplier of a number of food products to the world.