The tweet led to a barrage of comments from people, questioning the state-owned company's reaction, and asked it to investigate the matter 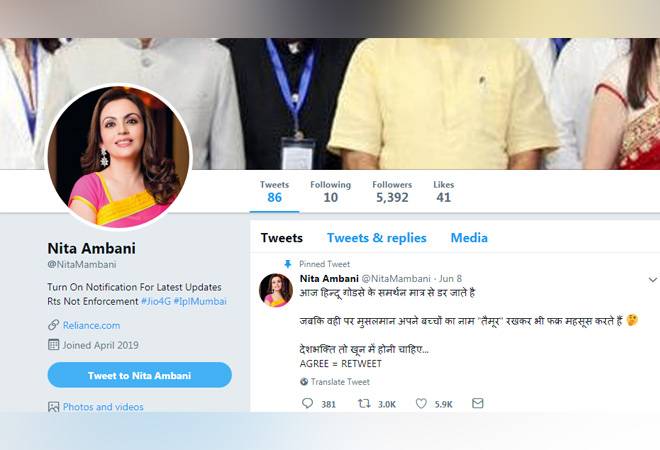 The objectionable tweet that MTNL shared came from a fake handle of Nita Ambani.

MTNL, a state-owned telecom service provider, on Thursday courted controversy after its official Twitter handle shared a shocking "communal tweet" on its timeline. The official Twitter account of the company replied to a tweet from a fake handle of Nita Ambani, the wife of billionaire Mukesh Ambani, which said that Hindus "fear to even support Godse, while Muslims name their children 'Taimur' and feel proud about it (translation from a Hindi tweet)..." 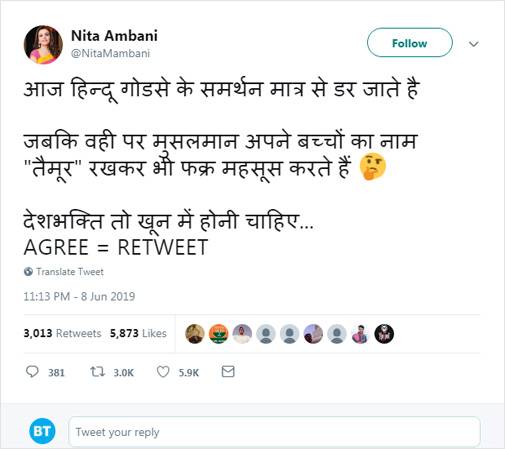 Commenting on the tweet, MTNL said: "Truth is hard to digest". The tweet led to a barrage of comments from people, questioning the state-owned company's reaction and asked the company to investigate the matter. By the time the tweet was deleted, the damage had already been done. "Someone from BJP IT cell forgot to switch handle before tweeting," commented a user. Another said, "It will be difficult for you to save your job Mr Admin Bhakt".

"...Such tweet in reaction or response from a PSU's official handle of @MTNLOfficial is not acceptable. Kindly investigate it. When we write to MTNL our grievances, they remain unattended n then u see such mad stuffs (sic)," tweeted a user. Some users also claimed that MTNL account might have been hacked.

Recently, a tweet by an IAS officer in Maharashtra had sparkeda row after she said that all statues of Mahatma Gandhi should be razed and that the government should also remove his images from the currency notes. The officer also thanked Nathuram Godse, who assassinated Gandhi in 1948. The state opposition parties, NCP and Congress, had asked the Fadnavis government to take strict action against the officer. She later clarified that it was just a "sarcastic" tweet, which was "misinterpreted".

The Godse controversy had erupted after BJP leader Pragya Thakur, during her Lok Sabha election campaigning, said Nathuram Godse was a "deshbhakt and will remain a deshbhakt". The BJP had asked her to apologise after her remarks left the party embarrassed.

Mysore University Result 2019 announced, here's how to check on results.uni-mysore.ac.in