Mumbai rains: Mahalaxmi Express has been stranded since 3 am; rescue operations are underway. 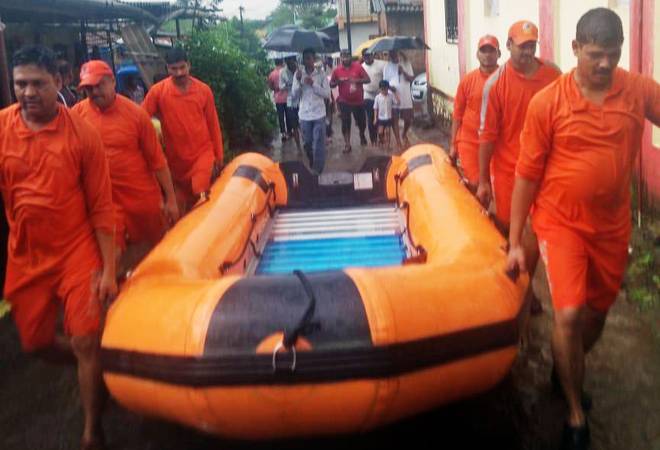 The Mumbai-Kolhapur Mahalaxmi Express has been held up since early Saturday morning due to heavy rains. Around 700 passengers are onboard, DRM Central Railways said. The train has been stranded since 3am between Badlapur and Vangani in Maharashtra that is 100 km away from Mumbai.

Chief Public Relations Officer of Central Railways Sunil Udasi said that the Railway Protection Force and city police have reached the site where the train is stranded. Biscuits and water is being distributed among the stranded passengers.

A National Disaster Response Force (NDRF) team has been deployed to rescue the passengers. The team has reached the spot with several boats. Along with that, a Navy helicopter is helping the rescue operation.

"We request passengers of Mahalaxmi Express not to get down from the train. The train is in a safe place. Staff, RPF and City Police are on the train to look after you. Please wait for advice from NDRF and other disaster management authorities," an official appealed to the stranded passengers.

Maharashtra's Directorate General of Information and Public Relations (DGIPR) Brijesh Singh said that three boats have reached the spot. He said that the Chief Secretary is overseeing the situation himself.

Due to heavy rainfall, the Kalyan to Karjat/Khopoli has been affected. River Ulhas is overflowing between Ambarnath-Badlapur-Vangani. A video is circulation on social media that shows overflowing reaching up to the floor of the train.

Additionally, eleven trains were cancelled on Saturday. On Friday, 17 flights had to be diverted from the airport and four had to 'go-around' before they could land.