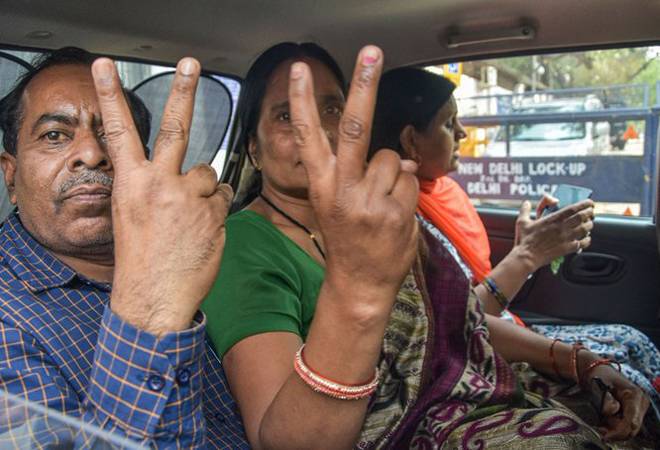 A three-judge Bench of the Supreme Court consisting of Justice R Banumathi, Justice Ashok Bhushan and Justice AS Bopanna, heard the last hearing today at 2:30 am. This last-ditch effort of hearing before SC bench failed to stay their hanging.

The Director-General of Tihar Jail Sandeep Goyal said that doctors had examined all four convicts and declared them dead. All their belongings and money they earned during their time in jail  will be handed over to their families.

Nirbhaya's mother Asha Devi said, "Justice delayed, but not denied, we will continue our fight for justice for India's daughters".

Nirbhaya's father Badrinath Singh said, "Today is our victory and it happened because of media, society and Delhi police. You can understand what is inside my heart by my smile".

Delhi Chief Minister Arvind Kejriwal condemned the system and said there were a lot of loopholes in the system. He also appealed to improve the sytem. Kejriwal said, "It took 7 yrs for justice to be delivered. Today, we've to take a pledge that a similar incident does not happen again. We've seen how the convicts manipulated the law until recently".

Swati Maliwal, Chairperson, Delhi Commission for Women on said, "It's a historic day, Nirbhaya got justice after over 7 years, her soul must have found peace today. The country has given a strong message to rapists that if you commit this crime you will be hanged".

Rekha Sharma, Chairperson of National Commission for Women (NCW) stated, "An example has been set today but it could have been done earlier. Now people know that they will be punished, you may extend the date but you will get punished".

Akali Dal spokesperson Majinder S Sirsa wrote on Twitter saying, "Beginning the day with the News of Justice! I salute the struggle done by Nirbhaya's parents to see this day".

Actress Taapsee Pannu also celebrated the hanging of the Nirbhaya gang rape convicts and wrote, "It's done. Finally. I hope the parents can finally sleep slightly better tonight after YEARS. It's been a long long battle for them. Asha Devi".