'Not in my culture to kill,' says PM Modi in new video of Bear Grylls' show Man vs Wild

PM Modi and Bear Grylls in Man vs Wild: In the new video PM says that personal hygiene is something that is taught to Indians from a young age but it is social hygiene that they must learn. 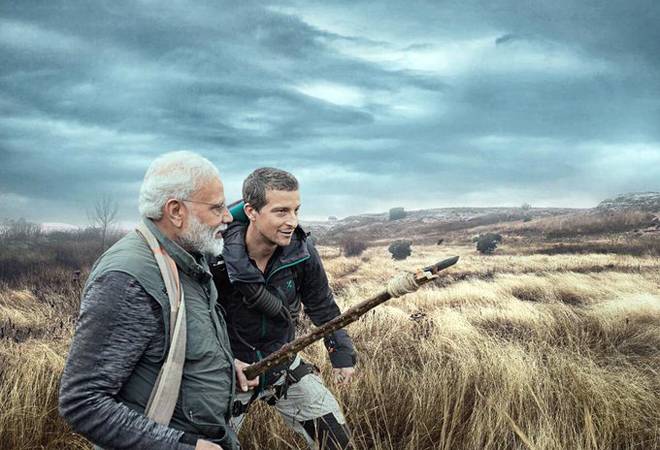 PM Modi and Bear Grylls in Man vs Wild

The Bharatiya Janata Party (BJP) shared a new and longer video of the upcoming episode of Bear Grylls' show Man vs Wild featuring PM Narendra Modi. In the latest video, PM Modi and Grylls can be seen in the wilderness of the Jim Corbett National Park and discussing a variety of subjects including India's vibrant wildlife, cleanliness in the country and PM Modi's sojourn into the Himalayas in his youth.

The video starts with Grylls talking about Indian wildlife and that the country is home to some of the deadly predators. He goes on to say that his episode in India will feature a very special man - PM Modi. Once they meet, they talk about the dangers of being out in the open in the wild.

"This is a wildlife conservation area but it is also a dangerous place...normally when people come to the park they never get out of the vehicle," says Grylls. PM Modi responds by saying that we should not consider it dangerous. "If we struggle against nature, then everything is dangerous...even humans," says PM Modi.

Watch PM Shri @narendramodi and @BearGrylls on #ManVSWild as they venture into India's wilderness to raise awareness about environment and animals.

Do tune in to @DiscoveryIN at 9 pm, 12 August! #PMModionDiscoverypic.twitter.com/vNKKtIFRwI

A little inside the national park, Grylls puts together a spear for the Prime Minister and shows him how to defend himself in case a tiger approaches. "But my culture does not teach me to kill. I will keep the spear because you have asked me to," says the PM.

He also asks PM Modi about his travels to the Himalayas and how it shaped his life.

The Prime Minister of India @narendramodi - leader of the world's largest democracy. And what he shared here was mind-blowing... coming soon to @discovery#pmmodiondiscovery#survival#india@worldscouting (video clip to follow) https://t.co/3yoTct1Wsdpic.twitter.com/AFdaa2HCoM

They both are also seen sitting beside the river and talking about the issue of cleanliness in India. PM Modi says that personal hygiene is something that is taught to Indians from a young age but it is social hygiene that they must learn.

The episode will be aired on August 12 at 9pm on Discovery Channel.