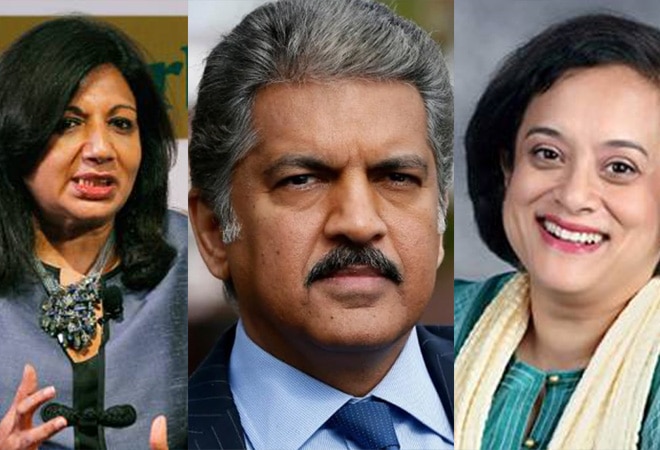 Former US Vice-President Joe Biden was sworn in as the 46th president of the United States on Wednesday at a historic inaugural ceremony. While Biden's running mate Kamala Harris also sworn in as America's first woman Vice President. Harris is also the first Asian-American and African-American to hold the post. Several India Inc giants took to Twitter to express their excitement about the first Indian-American woman taking office as VP.

Chairman of Mahindra Group Ananda Mahindra, who is very active on Twitter, shared a video of Harris raising her right hand and taking the oath of office. "Kamala Devi Harris …. I'm letting that sink in," wrote Mahindra.

Kiran Mazumdar-Shaw, Founder of Biocon, also retweeted a video of the oath-taking which was originally shared by Harris herself. Harris wrote, "I'm here today because of the women who came before me."

At the inauguration ceremony young Poet-Laureate Amanda Gorman recited a poem titled 'The Hill We Climb'. The poem called for unity in a time of deep division in the US. The poem struck a chord with Dejani Ghosh, chief of NASSCOM, as he shared a verse from it on his Twitter handle. He quote tweeted  WSJ journalist Julie Bykowicz who had earlier shared a verse used by Gorman.

But while democracy can be periodically delayed,

It can never be permanently defeated.

In this truth, in this faith we trust.

For while we have our eyes on the future,

History has its eyes on us.@TheAmandaGormanhttps://t.co/3HklpIFyq1

Ghosh was not the only fan of Gorman's poem. Marico Group Chairman Harsh Mariwala was also moved by it. "powerful, moving, inspiring & reflective," he wrote on Twitter.

Another fan of Gorman's poem was Snapdeal Co-Founder and CEO Kunal Bahl, who wrote on Twitter that he will share Gorman's poem with his daughter first thing in the morning/

Am showing this to my daughter first thing tomorrow morning.

Over 1,100 schools at border, coastal areas chosen for NCC training

No disinvestment, no worry! Rs 1.4 lakh crore earned from taxes on petrol, diesel