Google's latest gaffe has left netizens fuming. Twitterati took to the social media platform to share screenshots of Google throwing up images of PM Modi as India's first prime minister. Not only that, Google actually says Jawaharlal Nehru, while displaying an image of PM Modi.

However when one opens the Wikipedia page on India's first PM, it shows up a list of India's prime ministers in the correct order. Divya Spandana, head of Congress' IT cell, lashed out at Google for this mistake.

.@Google @GoogleIndia what algorithm of yours allows this?! You're so full of junk- pic.twitter.com/GHyxh3fEWm

But not only Spandana, a lot of Twitter users pointed out the faux pas.

Type 'India first pm' in google and result is Mr.Narendra Modi's photo instead of Pt. Jawaharlal Nehru. @Google Pls correct it.. How come you also fell in the trap of Mr.Modi? pic.twitter.com/H8zlP9zzW0

However, that's not the only case. Google is doing the same for India's first defence minister, home minister, and finance minister as well! 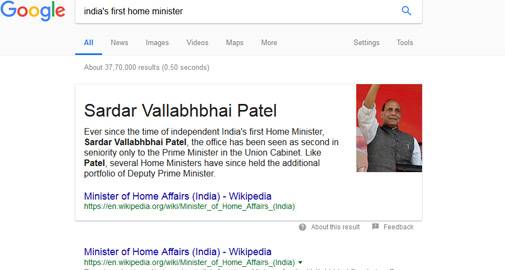 While, Google has rectified the page on India's first PM, it is yet to change the rest.

The reason why this faux pas happened in the first place is because while Google is displaying the Wikipedia page on the search words, it is showing the picture of the current ministers.

It could also be because usually such pages with lists display the current minister in their first image. Hence, Google's algorithm is pulling up both the information together.