The campaign, which was organised by Space Kidz India, was part of the Har Ghar Tiranga and as part of it the flag was sent to an altitude of 1,06,000 feet above the planet on a balloon that unfurled it.

The campaign, which was organised by Space Kidz India, was part of the Har Ghar Tiranga and as part of it the flag was sent to an altitude of 1,06,000 feet

To mark the 75 years of India's Independence, the organisation known for promoting space sciences to Indian children, Space Kidz India, hoisted the Indian tricolour about 30 kilometers above the planet. The campaign was part of the Har Ghar Tiranga campaign, which was launched to celebrate the 75 glorious years of India’s independence from British rule.  As per reports, the flag was sent to an altitude of 1,06,000 feet above the planet on a balloon that unfurled it. 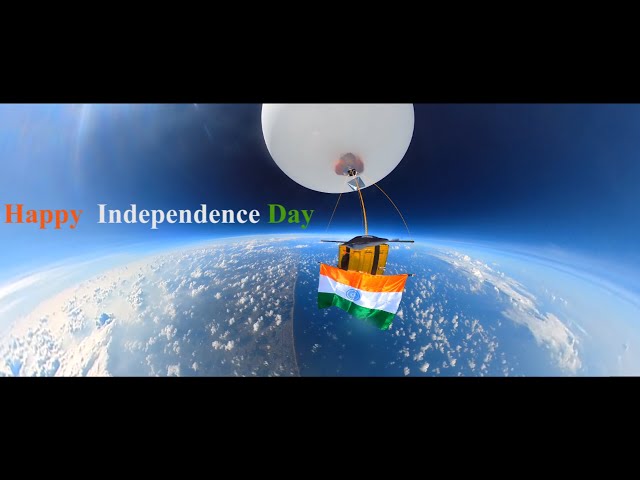 Space Kidz India is an organisation that grooms young scientists and talents and spreads awareness about astrophysics and space sciences among children across the world. The organisation recently launched, AzadiSAT, into the Low Earth Orbit, which was developed by 750 Indian female students to mark 75 years of Indian independence.

Eventually, the satellite was lost due to orbital issues as the Small Satellite Launch Vehicle (SSLV) that was launched failed to place it into the circular orbit of the Earth. But the organisation successfully created an ecosystem and a process to develop small satellites.

As per reports, the satellite cleared all the three stages of the launch of the Spaceport and was carrying the Earth Observation Satellite (EOS-02), the main payload of AzadiSat. But at the final stage, the mission was declared a failure as it could not reach its assigned orbit around the Earth.

India is celebrating 75 years of Independence and to mark the occasion, messages are pouring in from astronauts across the world. In a special video, astronaut Samantha Cristoforetti, who is living and working on the International Space Station, congratulated India’s journey and said that for decades international agencies have worked successfully with the Indian Space Research Organisation (ISRO) on many missions.

Congratulating India on the occasion, Indian-American astronaut Raja Chari said NASA and ISRO have a glorious past and have worked together in the early days of space-age when the two space organisations worked on sounding rockets in India. He said more joint science missions are in the offing and they have a bright future ahead.