Humphrey Yang pretended that one grain of rice was equivalent to $ 100,000 and then counted till $ 1 billion 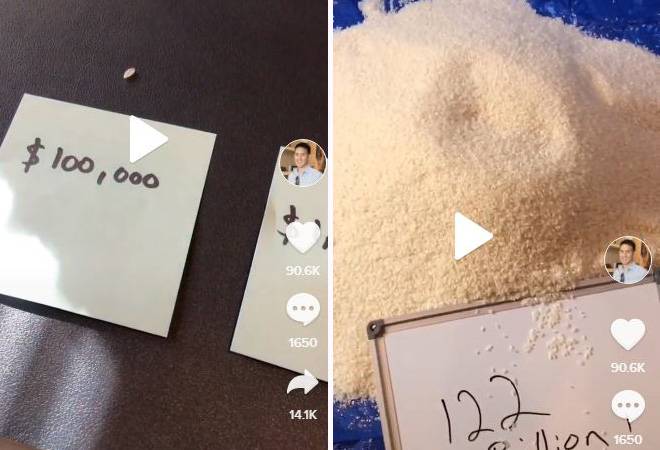 TikTok user Humphrey Yang took to the app to create an attention-grabbing visual representation of Jeff Bezos' net worth with grains of rice. The video later went viral on Twitter.

Yang is a 32-year-old eCommerce consultant and freelancer from Silicon Valley, California. To make the video, Yang asked users to imagine that one grain of rice was equivalent to USD 100,000. He then counted ten such grains with the total coming to USD 1 million. Yang then continued to count the grains by hand till he reached 10,000, the representative amount now measuring up to USD 1 billion.

Yang then took out a few grains from the USD 1 billion bunch, demonstrating how even after taking out millions of dollars the billion-dollar pile of rice looked the same.

After his video went viral on Twitter, Yang decided to create a second video that especially represented  Jeff Bezos's net worth in rice form.

In the video titled "Rice. Part Two," Yang used a digital scale to measure the weight of the billion-dollar rice pile. He then goes to a shop to buys two big bags of rice. He brings the bags homes and then begins to count to the amount equivalent to  Jezz Bezos's net worth.

"Once I had that 10,000 grains of rice counted out I knew how much it weighed," Yang told Mashable in an email. "Then [I] multiplied it out to figure that Jeff Bezos' approximate net worth was around 58 pounds of rice."

The 58 pounds of rice thus measured was equivalent to USD 122 Billion, which was Jeff Bezos's net worth at the time of the shooting of the video. Bezo's pile was so huge that Yang was easily able to horizontally bury a desktop keyboard in it.

Yang, who started using TikTok at the end of 2019 because he "wanted to educate Gen-Z and young millennials on financial literacy," often shares financial and business-related advice with his followers. Yang said that he got the idea to represent money using rice from a youtube video he saw many years ago. Yang was satisfied with how his version turned out.

"The process was tedious, the cleanup was a mess, but the video was great! I am glad I got to tell a story, show viewers the scale of money, and hopefully educate them on how much a billion vs 100+ billion is," he said.

Coronavirus in Delhi: How to stay safe?