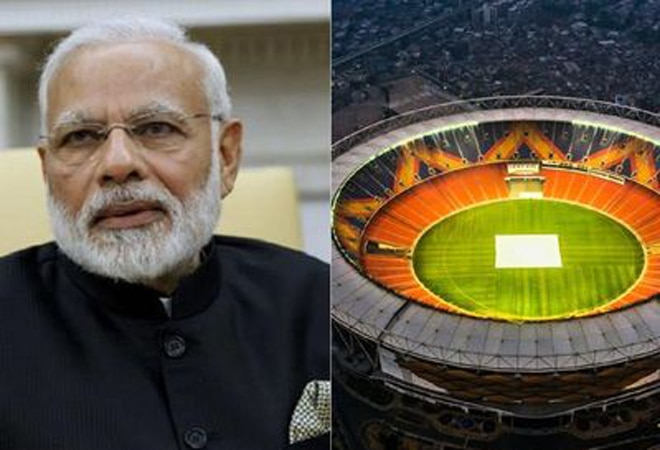 World's largest stadium, Motera stadium in Ahmedabad, Gujarat has been branded under a new name-Narendra Modi stadium. As soon as the news broke out that the revamped stadium will be named after incumbent Prime Minister Narendra Modi, netizens had a lot to say about it.

Many are terming the naming of the refurbished stadium after PM Modi narcissistic. Some said since PM Modi is involved in active politics, it is inappropriate to do such a thing.

Others supported the Prime Minister and said that after serving so many years in public office, Modi deserves at least one stadium in his name. Some defended the renaming on the grounds that there have been so many stadiums and airports under the Gandhi family name and it is only right that the stadium is named after PM Modi.

Check out some memes and reactions here:

Do not like this idea. Especially when he is still in active politics. It is illegal? No. But then even Congress did these things. If at all it should have been done when Modi ji had retired from active politics. But then people will disagree with me. https://t.co/LjSklmE0Et

Only people with all documents will be allowed to enter inside Narendra Modi stadium.

Why is my Twitter fam surprised the #MonteraCricketStadium or Sardar Patel Stadium has been renamed "Narendra Modi stadium"
This is the PM who wore a Monogrammed SUIT with his NAME on it just like other narcassist rulers did!
And our President inaugurated the "Modi stadium" pic.twitter.com/VcwQoXz6Av

There will be no press conference at the Narendra Modi cricket stadium.

Thats what is Modi is all about👏👏 pic.twitter.com/RVvM60dDXR

Yesterday Modiji was talking about selflessness and today he renamed Motera stadium as a Narendra Modi stadium.

Prime minister @narendramodi was president of Gujarat cricket assosiation when it was envisioned that world’s largest cricket stadium will be built at Motera. I feel it is only fair that the stadium is named after him.

Congress leaders after hearing that stadium has been named after Narendra Modi ji#MoteraCricketStadiumpic.twitter.com/LK4AgODqZx

Ahmedabad Got World's Largest Cricket Stadium because of @narendramodi

Those who never said a word for selection of 'Nehru' over 'Patel' despite 12 out of 15 votes, never gave honor to 'Sardar Patel', questioned Modi and mocked 'Statue of Unity' project are talking of "insult" to Sardar Patel because Motera Stadium is named as Narendra Modi Stadium.

That after being 4 term CM & 7 yrs PM. With 19 yrs of untainted run at public office weather he deserves one Stadium in his name or not ?

The stadium was inaugurated by President Ram Nath Kovind on Wednesday. Home Minister Amit Shah and Sports Minister Kiren Rijiju, along with the Board of Control for Cricket in India (BCCI) secretary Jay Shah, were also present at the event.

The stadium is now set to host seven international matches in quick succession.The Narendra Modi Stadium will host the third and fourth Tests between India and England as well as the entirety of the five-match T20I series between the two sides.The state-of-the-art facility can accommodate 1.32 lakh spectators.

'No flirting with cashier, no running away': Pune-based cafe's bizarre list of don'ts on menu goes viral