Sister Andre, who was born on February 11, 1904, is the world's second-oldest person according to the Gerontology Research Group's (GRG) World Supercentenarian Rankings List 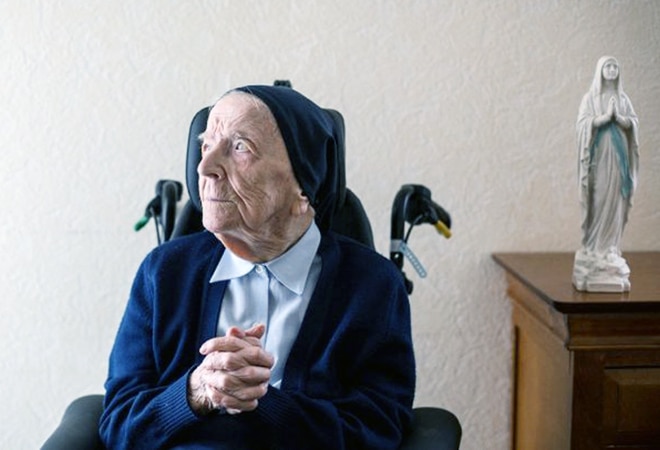 A 116-year-old French nun has become Europe's oldest person to survive coronavirus, just a day before her 117th birthday.

Lucile Randon, who took the name of Sister Andre in 1944, tested positive for coronavirus in her retirement home in southern France, on January 16. She was isolated from other residents but displayed no symptoms. Sister Andre, who is blind and uses a wheelchair, did not even worry when she received her diagnosis.

Sister Andre, who was born on February 11, 1904, is the world's second-oldest person according to the Gerontology Research Group's (GRG) World Supercentenarian Rankings List. The oldest person in Japan's Kane Tanaka, who turned 118 on January 2. Twenty of the world's oldest people in the GRG list are women.

Before Sister Andre, a 113-year-old woman in Spain defeated coronavirus in May 2020. Maria Branyas, who was born in the US on March 4, 1907, was infected in April from COVID-19 but she fought the disease off in isolation in her room in Olot city in Spain. Branyas moved to Spain with her family during World War I and also lived through the Spanish flu pandemic that swept the world in 1918-19.