Ukraine's geostrategic position has rendered it susceptible to the ongoing strains between Russia and the West.

As a buffer for the two conflicting blocs, Ukraine has had very difficult choices to make in the last decade. Russia's contention with the West.

Russia's contention with the West

Russia is opposed to NATO (North Atlantic Treaty Organisation) in its backyard, a position which is non-negotiable. However, Ukraine's current government wants to not only join NATO but also be a part of the European Union (EU).

Although much of the struggle is military as well as strategic, that is not where the story ends. Ukraine's economy, resources and the clash to lay claim to the country's bountiful rare earth elements are also the motives to influence its political leanings - Russia or Europe? Pledge allegiance to Russia as an erstwhile Soviet state or open up to the West? Tough choice for Ukraine. 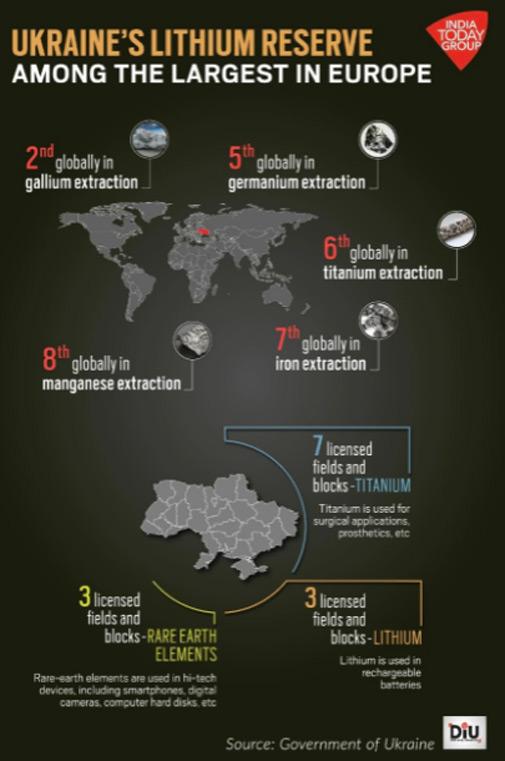 Ukraine's economic significance for Russia and the West

Both Russia and the West see Ukraine as a prospective buffer against each other. A look at the country's natural resources:

However, ironically enough, Ukraine depends on gas imports and it is primarily because the USSR began extracting gas on a large scale in Siberia in the 1970s.

Thus, much of the gas exploration, as well as production, have been transferred to Russia, due to which Ukraine's resources remain untapped. Presently, Russia supplies 40 per cent to 50 per cent of Europe's gas consumption via the Nord Stream 1 pipeline as well as the Ukrainian network.

Germany is also a big consumer of Russia's natural gas. The country gets 55 per cent of its natural gas from Russia, and the bulk of it goes through Ukraine, which earns a transit fee equivalent to $7 billion.

This is around four per cent of Ukraine's GDP (Gross Domestic Product). While these colossal gas reserves remain unexploited, the country is still important for gas transport from Russia to Europe.
In 2019, Russia and Ukraine inked a transit agreement that allows easy transfer of Siberian gas to the EU through Ukraine's huge gas transportation system, regardless of unilateral sanctions by the US.

In order to feed the energy-hungry Europe, Russia set up the Nord Stream II gas pipeline to transport natural gas which would be cost-effective, reliable, and sustainable.

This also implies that the US is nowhere near the gas race. However, Gazprom's Nord Stream II pipeline which goes through the Baltic Sea might have hit a major roadblock with the Russian President Vladimir Putin's invasion of Ukraine. Gazprom is Russia's largest company and, as of 2019, was the world's largest publicly-owned natural gas firm.

Therefore, it is not surprising that Russia'sUkraine invasion will have a huge collateral effect on the coal and electricity sector.

In 2021, India imported coal to meet its domestic coal shortage and with the Russian invasion of Ukraine, that supply chain is going to get impacted. Ukraine has large natural resources, with precisely five per cent of the earth's natural and mineral resources.

Ukraine was the fifth largest exporter of iron ore in the world in 2019 and in the same year, iron ore was the third most-exported product in the country. Lithium and titanium are some of the precious metals on earth today. Why is that? Lets' take a look:

However, no mining work is happening in the area currently. The Dobra and Donetsk mines were up for grabs and there has been cut-throat competition between Chinese Chengxin Lithium and Australia-listed European Lithium, and both the companies want a foothold in the European lithium industry.

The companies are just two of a list of bids published online by the Ukrainian Geological Survey. Lithium chemicals are the main component of electric vehicle (EV) batteries. The majority of auto companies are looking at lithium reserves across the world.

Some estimates indicate that up to 20 per cent of the proven world reserves of titanium ores are situated in Ukraine. But it is one of the few nations with a closed-loop production in the titanium industry - from mining and processing of the titanium iron ores to the producer of finished products.

Interestingly, China was the largest importer of Ukrainian titanium iron ores in 2021, with Russia on the second spot (15.3 per cent), and Turkey ranked third (14.5 per cent). The one industry that could be majorly impacted should the Ukraine-Russia clash intensify, is the aircraft industry, mainly because titanium is an important component used in the manufacture of aeroplanes.

Boeing, in a statement on January 31, said that the tensions over Ukraine create an "adverse climate" for its business. In the event of economic sanctions, the supply chain for titanium could be affected, and furthermore, the ability to produce aircraft could be hampered.

To illustrate, the US' Boeing has broadened its titanium supply chain since 2014, when Russia was sanctioned for its annexation of Crimea from Ukraine, however, it is still heavily reliant on Russia's VSMPO-AVISMA -- world's largest manufacturer of titanium -- for the supply of the metal.

Russian invasion of Ukraine means the former will rein in the exports, which will create food security issues as Ukraine is one of the largest distributors of wheat and corn. Grain exports are the mainstay of Ukraine's economy.

Much of the country's corn and wheat are destined for Africa and West Asia, which are heavily reliant on imports for food items. Over 50 per cent of Ukraine's annual corn and wheat shipments head to Africa or the Middle East.

Global food security is the biggest concern if Ukraine's exports are disturbed. Meanwhile, owing to distance, US wheat amounts to less than 10 per cent of what caters to those regions. Ukraine is aiming to clinch the third spot in wheat and fourth spot in corn this year, but the ranking could be missed due to the crisis with Russia.

Race between Russia and the West for Ukrainian resources

The US and Europe could be looking at food and energy security by trying to ensure Ukraine's tilt towards the West, but will Russia allow it? The US has always been wary of Russia's authority in Europe and the latter's influence is only going to grow stronger now with Ukraine's invasion, particularly in the Balkans, and if it is able to withstand global sanctions. However, Ukraine, which has the US' support, can thrive and capitalise on its natural resources.

Could that be the US' pretext to compete with Russia? While Europe depends on Russian natural gas, the US is trying to be a more prominent Liquefied Natural Gas supplier (LNG), even though the price of LNG would be substantially higher in price than that of Russian gas.

The point that the US is aiming to make is to stop Russia from dominating Europe through energy dependence and what US Secretary of State Antony Blinken termed "weaponising heat" by controlling gas during winter months when Europe needs Russia to stay warm.

Furthermore, fossil fuels are not infinite, which means Russia has to scout additional sources of natural gases to tap. The country has to look no further than to its west - Ukraine. All the strategic positions notwithstanding, to Russia and the West, Ukraine of the future is an untouched, untapped, natural resource hotspot.

A foothold in the country would mean an economic driver, energy security, and a strong and secure strategic position.

(With inputs by Geeta Mohan.)