Ghaziabad is witnessing a three-cornered battle for the 2019 Lok Sabha election. Former army chief and union minister, Vijay Kumar Singh, who is renominated by the Bharatiya Janata Party (BJP), is up against Samajwadi Party-Bahujan Samaj Party-Rashtriya Lok Dal alliance candidate Suresh Bansal and the young faced Dolly Sharma of the Congress for the Ghaziabad parliamentary constituency. 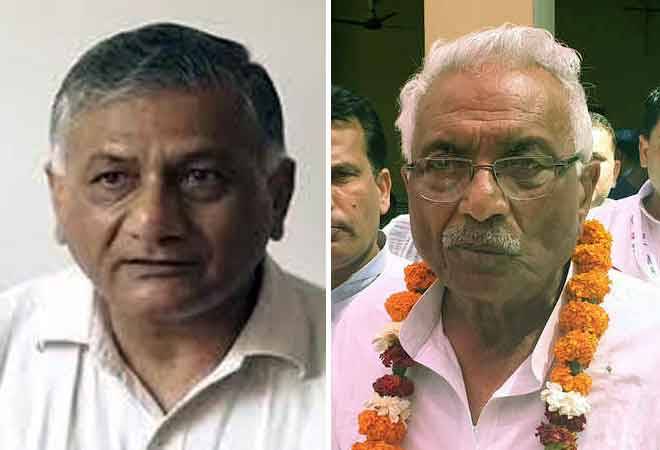 The sitting MP from the Ghaziabad constituency, has gained an advantage in the Lok Sabha elections 2019 against his main challenger Dolly Sharma, according to the early trends.

As excepted, the sitting MP from the Ghaziabad constituency, gained advantage against his main challenger Suresh Bansal by 9.44 lakh votes( almost 62% majority). Suresh Bansal with 4.43 lakh votes cam in the runner up position, followed by Dolly Sharma with 1.11 lakh votes.

BJP has represented the constituency for the last two terms. Back in 2009, the newly created Ghaziabad constituency had selected BJP's Rajnath Singh for the Parliament seat. In 2014, VK Singh created history by defeating Congress' Raj Babbar by a margin of 5.67 lakh votes,as it was the second highest victory in the country after PM Modi's margin in Vadodara.

Dolly Sharma is the youngest of the 12 candidates from Ghaziabad and one of the only two women nominees (the other being Divya Yogmaya Saraswati, nominated candidate from Rashtriya Bharatiya Jan Jan Party).

Additionally, AAP, SP and BSP joined hands to put forward SP's Suresh Bansal,the former MLA, who until recently was with the BSP. In 2014, the SP, BSP and the AAP had separate candidates. Bansal, in his campaign, questioned the 'development claims' made by VK Singh and stressed on the difficulties faced by the business community in the aftermath of demonetisation and the GST rollout. Bansal also highlighted Singh's "absenteeism", saying the MP "remained away from his constituency when people needed him".

Ghaziabad parliamentary constituency, has nearly 27,28,084 voters in five segments - Loni, Muradnagar, Sahibabad, Ghaziabad and Dhaulana, out of which the Ghaziabad segment has 4,48,304 voters.

In Ghaziabad, the total voter turnout recorded was 57.60 per cent which is lowest among the the eight districts which underwent polling in the first phase of 2019 Lok Sabha elections. In 2014 general elections, the constituency had recorded a turnout of 56.94%. The BJP during the 2017 assembly elections had won all the five assembly seats of Loni, Muradnagar, Sahibabad, Ghaziabad and Modinagar.