The Supreme Court directed the Election Commission to increase random matching of VVPAT slips with EVMs to five polling booths per assembly segment, from one at present, in the Lok Sabha polls, saying it will provide greater satisfaction not just to political parties but the entire electorate. 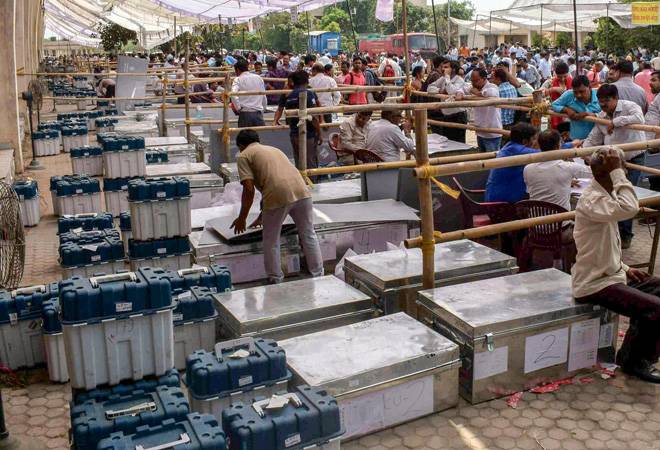 Lok Sabha election 2019: The demand by the parties to verify votes by paper trail comes in the peak of the poll season.

Raising doubts over the credibility of EVMs, a number of opposition parties Sunday said they will move the Supreme Court again to demand verification of at least 50 per cent of votes by paper trail.

Opposition parties, including the Congress, Telugu Desam Party (TDP), Samajwadi Party, CPI and CPI(M), jointly addressed a press conference to highlight the issue of transparency in the election process and protection of voter rights with a call to "save democracy".

The demand by the parties comes in the peak of the election season.The first of the seven phases of the Lok Sabha polls was held on April 11.

The Supreme Court Monday directed the Election Commission to increase random matching of VVPAT slips with EVMs to five polling booths per assembly segment, from one at present, in the Lok Sabha polls, saying it will provide greater satisfaction not just to political parties but the entire electorate.

Opposition parties, including the Congress, have been demanding that all votes polled through EVMs be verified with at least 50 per cent voter verifiable paper audit trail (VVPATs).

A VVPAT is intended as an independent verification system for voting machines designed to allow voters to verify that their vote was cast correctly and will help detect any possible election fraud or malfunction of EVMs.

Kejriwal claimed that people were losing faith in EVMs and the election procedure. These are raising a question mark on the country's democratic structure, he said.

Congress leaders and senior advocates Kapil Sibal and Abhishek Singhvi also attended the conference, with Singhvi saying opposition parties will approach the Supreme Court seeking a direction to the EC for counting of at least 50 per cent of the VVPAT slips with the EVMs in every assembly segment.

Sibal said, If the EC will ignore this issue then we will take other measures. We will not sit quietly. We will approach the Supreme Court."

Singhvi said the opposition parties will carry out a nationwide campaign on the issue of discrepancies in EVMs and alleged that the EC was not doing enough to address issue of EVM malfunctioning.

"Questions were raised after the first phase of elections, we don't think the EC is paying adequate attention. If you press the button before X party, vote goes to Y party. VVPAT displays only for 3 seconds, instead of 7 seconds," Singhvi said.

Raising questions on the EC's intentions, Sibal said, "Why the EC does not want 50 per cent VVPAT to be counted. Today, 20-25 per cent EVMs are not working properly. People vote till 4 am and wait in queues. What does this mean?

It will be a misfortune if the EC supports the voting machines instead of the voters, he said.

Kejriwal said, "EVMs are being programmed by the BJP to win the Lok Sabha elections. People don't believe in EVMs anymore. All of us (opposition parties) want at least 50 per cent VVPAT counting except one party, BJP, which is benefitting out of this manipulation of machines.

Loss of faith in the electoral procedure is raising a question mark on the country's democratic structure," the Delhi chief minister said.

He also accused the EC of not paying heed to the complaints of EVM manipulation.

"Why is EC not listening or acting on the complaints. There is a serious manipulation of EVMs. Why is EC ignorant of this? Why is not being investigated that people are pressing other party's button on the EVM but the vote goes to BJP," Kejriwal said.

Naidu, a key interlocutor of the opposition, said EVMs are not reliable and opposition parties are not satisfied with the Supreme Court order directing the EC to increase the number of EVM's randomly verified from 1 to 5 per assembly constituency.

He said that a fresh petition will be filed in the matter.

"We are raising doubts about the EVMs. The confidence of the voter can only be restored through paper trail machines. We want the EC to ensure 50 per cent counter check of paper trail of all the EVMs," Naidu said.