Lok Sabha Election Phase 3: Jaya Prada is a seeking a third term from this seat while Azam Khan is looking to make his Lok Sabha debut. Rampur, a minority-dominated Lok Sabha constituency in western Uttar Pradesh, is voting today, in the third phase of the polls. The main contestants in the fray are BJP candidate, Jaya Prada, who is seeking a third term from this seat, Samajwadi Party-BSP combine's candidate Mohammad Azam Khan - Rampur is widely regarded as this seasoned politician's stronghold - and former MLA Sanjay Kapoor on the Congress ticket.

Sanjay Kapoor, an upper caste Hindu, is expected to cut into the BJP's vote share, paving the way for the Samajwadi Party (SP) stalwart Khan's Lok Sabha debut. In fact, many call him a dummy candidate. That makes the contest for this constituency a direct fight between friends-turned-foes Jaya Prada and Khan. Here's how these two candidates stack up:

The Bollywood actor-turned-politician had created history in 2004 by winning the Rampur seat for the first time for SP, defeating the heavyweight, sitting Congress MP Begum Noor Bano by 85,000 votes. Ironically, it was Azam Khan who brought her to Rampur and helped her win the elections. Jaya Prada was in the Telugu Desam Party before that.

The relationship between the two soured when the former Bollywood superstar came out in support of Amar Singh, the former General Secretary of the Samajwadi Party and Rajya Sabha MP. By the 2009 elections, the rivalry was so bitter that Khan supported Congress' Bano against her but Jaya Prada managed to register victory on the SP ticket yet again.

After slipping into political oblivion post the 2014 polls, when she contested from Bijnore on a RLD ticket, Jaya Prada is now back as a BJP candidate.

As per her election affidavit, she has completed her BCom first year from Raj Laxmi Women's College. Jaya Prada's declared income for FY18 was Rs 31.29 lakh, down from Rs 51.22 lakh in the previous fiscal, while investments (equity in various companies) were pegged at Rs 96.34 lakh. She also owns six cars, 2 kg gold valued at over Rs 60 lakh and numerous houses and commercial properties worth Rs 18.65 crore. Her total liabilities stand at Rs 1.55 crore - most of it is home and car loans - and has declared a personal loan of Rs 6.20 crore to Saffire Exports & Agency Pvt Ltd.

The nine-time MLA from Rampur and a cabinet minister in Akhilesh Yadav's government has been fielded as the candidate of SP-BSP combine, apparently with an eye on Muslim votes - according to the 2011 census and 2019 population data, Rampur boasts a Muslim majority. In fact, Khan is reportedly referred to by residents of Rampur city as 'Mantriji'.

In his election affidavit, he has declared his FY18 income as Rs 5.76 lakh, down from Rs 16.27 lakh in the previous fiscal. He owns two cars and real estate valued at Rs 40.17 lakh while his wife, Tazeen Fatima, owns property worth Rs 2.71 crore. He declared that he does not own any gold but his wife owns 200 grams of gold jewellery valued at Rs 6.6 lakh. In addition, he owns several weapons - 12 bore DBBL, .357 bore revolver and 30/01 Bore rifle while his wife owns a revolver. Khan has 10 pending criminal cases against him.

Jaya Prada vs Azam Khan at a glance: 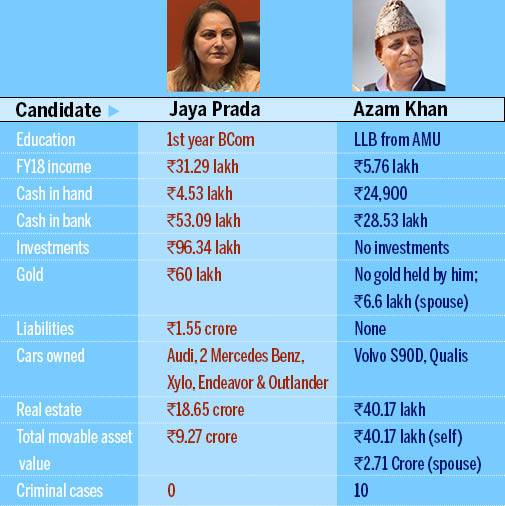