Lok Sabha Election 2019 LIVE updates: Every family will have a home by 2022, says PM Modi

Lok Sabha Elections 2019: Prime Minister Narendra Modi in an interview said that every Indian family will have a home by 2022 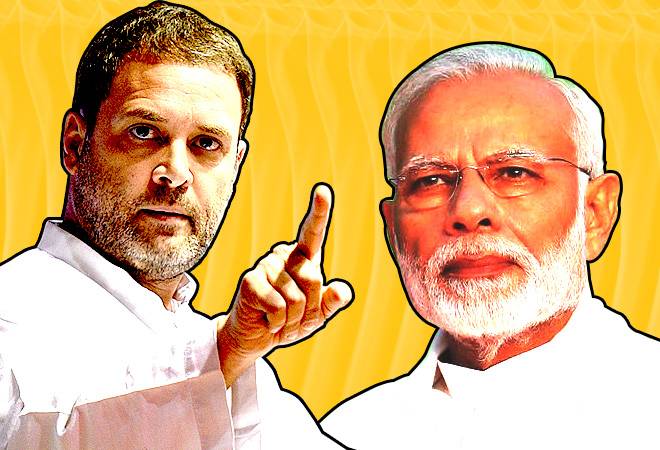 With only three days left for Phase 2 of the Lok Sabha Elections 2019, campaigning across the country is progressing in full force. Congress President Rahul Gandhi, sister Priyanka Gandhi Vadra and UP West General Secretary Jyotiraditya Scindia are scheduled to hold a rally in Fatehpur Sikri. Scindia is also scheduled to hold a rally in Aligarh. BSP supremo Mayawati is also holding a rally in Aligarh later in the day.

Meanwhile, Azam Khan who had said on Sunday, "It took you 17 years to identify her real face but I got to know in 17 days that she wears khaki underwear." As per reports, he was referring to BJP candidate from Rampur, Jaya Prada. Following a backlash on his comments, Khan defended himself and said that he hasn't named anyone and he knows what he should and should not say.

9:46pm: BJP shall cross 272 on its own but will take the alliance partners of the NDA along in government formation, said Amit Shah in an interview.

9:44pm: PM Modi said that his party will perform better than the last Lok Sabha elections. Speaking on the political alliance in Uttar Pradesh, PM said that the people of the state have made up their minds and will support the BJP.

9:42pm: PM Modi alleged that the Congress misused the Constitution many times. He also said that Sikhs were massacred in 1984 riots. "Will the Congress give justice to the Sikh community?" PM Modi said.

9:39pm: The 'tukde tukde gang' has made the manifesto of Congress. When the situation at the border is tense, does it make sense to dilute AFSPA, said Amit Shah in an interview.

9:37pm: In the next five years, our government will focus on people's aspirations, said PM Modi.

9:35pm: PM Modi said, "People are looking at our speed, scale and our skills. We have followed this continuously for 5 years. Our hard work for 5 years only brings confidence in people."

9:32pm: EC bars Union Minister and BJP leader Maneka Gandhi from election campaigning for 48 hours starting from 10 am tomorrow, for violating Model Code of Conduct during her election campaign held in Sultanpur, ANI has reported.

9:28pm: BSP chief Mayawati on EC ban: "EC's show-cause notice on 11 April didn't allege that we delivered an inciting speech, it had only 1 allegation that we were asking for votes on name of 1 particular community."

BSP chief Mayawati on EC banning her from election campaigning for 48 hours starting from 6 am tomorrow: EC's show-cause notice on 11 April didn't allege that we delivered an inciting speech, it had only 1 allegation that we were asking for votes on name of 1 particular community pic.twitter.com/aKppASsapy

9:25pm: Prime Minister Modi said that the farmers will get electricity for 365 days in a year with the help of solar panels.

9:22pm: "When congress talks about NYAY, the party has knowingly, unknowingly accepted that they have done grave injustice to the country since independence. This is going to cost them," PM Modi said in a interview.

9:20pm: BJP President AMit Shah in an interview said, "We are not journalists, we speak with the public in a flow, from heart."

We are not journalists, we speak with the public in a flow, from heart. But huge issues are made out of few slip of tongue. EC is cognisant of all such issues. This is part and parcel of electioneering. But public see the big picture: Shri @AmitShah#FranklySpeakingWithShahpic.twitter.com/pZ5opDXepX

9:15pm: Prime Minister said that the BJP has kept national security as a top priority in its manifesto.

9:10pm: PM Modi in an interview said that India has made its place in the world. "Earlier, the country was just a spectator but now it is an active participant," PM Modi said.

3.00pm: EC on Mayawati, Yogi Adityanath's communal remarks: The Election Commission of India (ECI) has barred both Mayawati and Yogi Adityanath from holding public meeting, road shows and giving media interviews and posting anything on social media for the 48 hours and 72 hours, respectively. The ban will start at 6am on April 16.

2.30pm: The money of the 'NYAY' scheme will go into the accounts of a woman in a family. That means we will deposit money into the account of 5 million women each year," says Congress President.

2.15pm: "We have a new idea in the manifesto for the young entrepreneurs. When you want to start a business, you won't have to take permission from any govt departments for 3 years. Take permission after 3 years once your business is established," says Congress President.

We have a new idea in the manifesto for the young entrepreneurs. When you want to start a business, you won't have to take permission from any govt departments for 3 years. Take permission after 3 years once your business is established: Congress President @RahulGandhi#NyayYatrapic.twitter.com/AnJWiWzvxJ

1.41pm: The Congress President says the money for the party's NYAY scheme will not come from the middle class but people like "Anil Ambani and Mehul Choksi". He said PM Modi, who calls himself a chowkidar, has never guarded a poor's house but rich people like Anil Ambani. He said these people (the BJP) want to divide India in two parts -- one for businessmen like Nirav Modi and Anil Ambani and another for poor people. The Congress would increase MSP (minimum support price) for farmers every year, he added.

1.40pm: "Priyanka ji said in the beginning that wherever you see, you'll find publicity of Narendra Modi being done. Switch on TV-Narendra Modi, switch on a radio-Narendra Modi, walk on the roads-Narendra Modi. Where does all this money for publicity come from?," asks Rahul Gandhi.

1.35pm: "BJP is today talking about nationalism and Pakistan. They must talk what they have done for youth, farmers and other sections of society. They must tell what their agenda for women and women security is," says Priyanka Gandhi.

1.32pm: "The government's campaigning is so good that they are present everywhere, from TV to trains...in fact, they are campaigning through food packets on polling day," says Priyanka Gandhi.

1.02pm:While businessmen are paid, why leave poor behind," says Priyanka Gandhi. She also said that the people should not misuse the Army.

12:25pm: UP CM Yogi Adityanath on Azam Khan's remark, "This shows the thinking and culture of Samajwadi Party. The silence of SP chief and his ally Mayawati, who is also a woman, is surprising. This is very unfortunate... Azam Khan's statement is extremely disrespectful, shows his cheap mindset."

12:20pm: MP Shashi Tharoor was injured while offering 'Thulabharam' at a temple. The Congress leader has been moved to a local hospital in Thiruvananthapuram. Tharoor has suffered injuries on his head and received 6 stitches on his head. Doctors say he is out of danger.

12:15pm: UP CM Yogi Adityanath in Rourkela, Odisha said, "Money sent by Central govt for development works in Odisha hasn't been used by BJD govt. Naveen Babu's govt has failed completely in implementing schemes whether it's about providing Rs 5 lakh insurance cover under Ayushmaan Bharat or the toilet scheme."

12:00pm: Supreme Court has issued notice to Congress President Rahul Gandhi in connection with a contempt petition filed against himand has sought an explanation. The petitioner, BJP's Meenakshi Lekhi, has claimed in her petition, "The words used and attributed by him to SC in the Rafale case has been made to appear something else. He is replacing his personal statement as Supreme Court's order and trying to create prejudice."

11:45am: SC expresses displeasure with EC 'having limited power to act against leaders like Mayawati and Yogi Adityanath making statement along religious lines and violating model code of conduct during elections'. A Bench headed by CJI asks representative of EC to appear before it tomorrow: ANI.

11:30am: Union Minister Dharmendra Pradhan on BJP Khordha Mandal President Manguli Jena's murder: "We have to respond to his death not by bullet, but by ballot. Odisha CM Naveen Babu is shedding crocodile tears. Incident like this in a democracy is condemnable."

10:45am: Commenting on the murder of BJP Khordha Mandal President, Odisha CM Naveen Patnaik said, "I strongly condemn the heinous murder that has taken place in Khordha, requested Election Commissioner to direct the Police to take trick action against those involved."

10:30am: Jaya Prada on Azam Khan's remarks: "It isn't new for me. You might remember that I was a candidate from his party in 2009 when no one supported me after he made comments against me. I'm a woman and I can't even repeat what he said. I don't know what I did to him that he is saying such things. He shouldn't be allowed to contest elections. Because if this man wins, what will happen to democracy? There'll be no place for women in society."

10:20am: NCW Chairperson on Azam Khan's remark against Jaya Prada, "He's always talking dirty about women and in this election it's the second remark he gave against a woman politician. NCW has taken suo-motu cognizance and we are sending him notice. We are also writing to EC to take strict action against him because he has to learn this lesson now. It's high time, he has to stop this. Women are not sex objects. I think, women voters should vote against such kind of people who are treating women in such way."

10:10am: BJP Goa filed a complaint with the Election Commission on Sunday against a Roman Catholic priest for 'creating an atmosphere of hate & fear against a particular political party & a specific religion' in an address inside a religious institution.

9:55am: A case has been registered against BJP MLA from Belapur, Manda Mhatre, for violating the model code of conduct. He allegedly asked voters to vote twice in elections.

9:48am: An FIR has been registered against Samajwadi Party leader Azam Khan for his comments against BJP leader Jaya Prada.

9:45am: "Armed forces and soldiers have always been kept separate from politics, in this country. For the first time in 70 years, they are being politicised. Yogi ji called the Indian Army 'Modi's army'," said Rajasthan Chief Minister Ashok Gehlot.

9:42am: Election Flying Squad and Income-Tax department conducted raid at MLA hostel at Chepauk on Sunday night. Rooms of AIADMK RB Udayakumar and 2 others were searched.

9:40am: Ex-Mizoram Governor Aziz Qureshi alleged that PM Modi orchestrated the entire Pulwama incident so that he can win votes.

BJP Goa filed a complaint with the Election Commission yesterday against a Roman Catholic priest for 'creating an atmosphere of hate & fear against a particular political party & a specific religion' in an address inside a religious institution pic.twitter.com/V1nQ35OnSH

9:30am: TDP candidate for the Nuzvid Assembly seat M Venkateswara Rao Sunday lodged a complaint with the Election Commission, saying polling equipment have been shifted from strong room without any intimation. He said the equipment were from the Nuzvid Asembly segment and were stored in the strong room at Machilipatnam Krishna University campus after polling was held on April 11.

Election authorities, however, said the equipment that have been shifted were either not used on the election day or defective.

"114 VVPATs, 104 ballot units and 102 control units that were unused in the election or defective have been shifted from the Krishna University campus to the EVM godown," said Returning Officer Swapnil P Dinakar.

Rahul Dravid, Karnataka's election commission ambassador, will not be able to cast vote this time