IRCTC IPO is the largest of all four entities offered by the Indian Railways after RITES, Rail Vikas Nigam and Ircon. It has turned out to be most-watched share sale by prospective investors in recent times 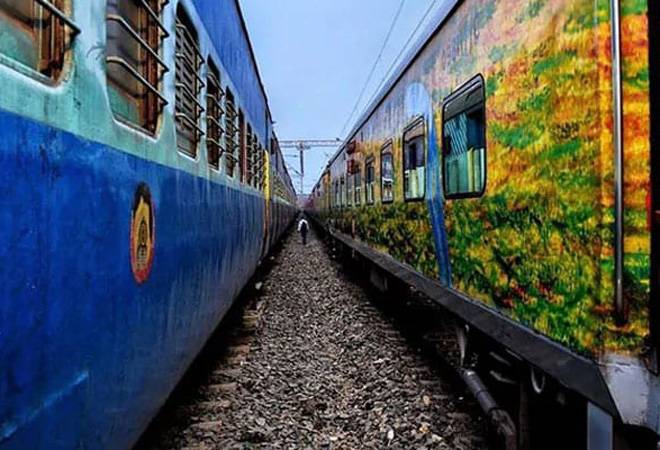 IRCTC IPO is entirely an offer for sale (OFS) by the government, where its diluting 12.6% stake at Rs 645 crore, amounting to 2.01 crore equity shares (20 million shares)

The IRCTC IPO is the largest of all four entities offered by the Indian Railways after RITES, Rail Vikas Nigam and Ircon. It has turned out to be most-watched share sale by prospective investors in recent times.

The IRCTC IPO is entirely an offer for sale (OFS) by the government, where its diluting 12.6% stake at Rs 645 crore, amounting to 2.01 crore equity shares (20 million shares). Starting with a minimum bid size of 40 equity shares (and in multiple thereafter), the stake sale will bring down the government's share in the company by 12.6% to 87.4% against 100% stake at present.

The IRCTC IPO closes on October 3. Of the total shares on offer, 50% will be available for allocation to qualified institutional buyers (QIBs), including 2 lakh equity shares for the mutual fund portion on a proportionate basis. Another 15% of the offer is allocated to non-institutional investor category and 35% will be made available to the retail category. Additionally, there's a discount of Rs 10 per share for retail category and eligible employees.

IRCTC shares are available in a price band of Rs 315 to Rs 320. That translates into P/E multiple of 18.8 times to its FY19 earnings per share of Rs 17, which is also value for money.

The company would not receive any proceeds from the IPO and "all proceeds shall go to shareholders", IRCTC said.

Government of India's railway tourism unit earns Rs 10-20 per e-ticket sold from its e-ticketing monopoly, apart from its franchise revenues in catering. Catering segment of the business has been the company's biggest contributor to sales over the years.

Out of its four primary businesses, IRCTC generates 12% of revenue from the Internet ticketing segment, 55% from catering business, 23% from travel and tourism and the rest 10% from its packaged drinking water segment. Moreover, revenue from catering services doubled in just 2 years, from Rs 400 crore to over Rs 1000 crore.

Except for its main genre of ticketing and catering services, IRCTC also has footprints in across major tourism segments such as hotel bookings, rail, land, cruise and air tour.

IndiaNivesh Securities said on Thursday that it expects IRCTC's food catering and travel tourism segments to grow in mid-teens while operating margins of packaged water division to improve as more plants are commissioned.

IRCTC has a market share of 71.2% in ticket booking which is expected to rise to 83.5% by FY22. Moreover, it's market share in packaged drinking water is 45% which has the potential to rise up to 100%.

The company has diversified into other businesses, including non-railway catering and services such as e-catering, executive lounges and budget hotel. This added with strong growth seen in Domestic Tourist Visits (DTVs) to all the states, gives PSU the right edge compared to its listed peers.

The Central Public Sector Enterprise (CPSE) has strong fundamentals, debt-free balance sheet along with decent return ratios with return on equity (ROE) being 26%, operating margins of 20% and PAT (profit after tax) margin at 15%.

Its sales rose 25% year-on-year to Rs 1,899 crore, as per the draft red herring prospectus filed with Sebi in August.

IRCTC has a near-monopoly in ticketing and catering services. In its offer document, IRCTC compares itself to MakeMyTrip and Yatra. But that does not seem accurate, as the company earns major chunk of the revenue from catering too, making it a very lucrative revenue source.

"IRCTC has a unique business model and the company does not have any competition across any business segment," points out Anand Rathi in its IPO note.

IRCTC IPO opens on Monday: Key things to know before you invest in it

Incorporated on September 27, 1999 as a public limited company, IRCTC is wholly owned by the Government of India (GoI) and under the administrative control of the Ministry of Railways (MoR).

It's known that the IPO comes as a part of the government's divestment process strategy that targets raising Rs 1.05 lakh crore via this route for FY'20. The launch of IPO comes days after the Union government's decision to cut corporate taxes which sent the stock markets soaring.

IRCTC, the railway's arm is the only entity authorized by the Indian Railways to provide rail tickets, manage catering services onboard trains and supply drinking water at railway stations and trains.

To carry out the disinvestment of 2,01,60,000 Equity Shares by the GOI constituting 12.60% of our Company's paid-up Equity Share capital, " company's objective of the issue read, adding another factor of benefiting from the listing on the Stock Exchanges.

Indian Railways segment is altogether a government-controlled monopoly for the benefit of the nations' citizens and structurally based on the cause of the people. Therefore, the government has a responsibility to cater services to the citizens, which can further mean running unprofitable services too, compared to a private enterprise.

-Removal or reduction of service charge by Ministry of Railways or instructing IRCTC to share part of the revenue with them, is another worry for the company, according to analysts at Angel Broking.

-There is no industry benchmark here as the enterprise belongs to various business segments. It cannot be relative only to the travel industry, but also to other consumer-oriented sectors.

-The company is substantially dependent on Indian Railways. Therefore, any adverse change in the policy of the Ministry of Railways may adversely affect profitability.

-The government announced a planned outlay of Rs 1.59 lakh crore for the railways in the Interim Union Budget, which was 14% higher than the preceding year.

-The company has a debt-free status with strong historical performance as of now.

-The ticketing revenue fell after the removal of service charge in 2016 but service charge has been reintroduced from September 1 and this will definitely add to the revenue.

-A new Catering Policy was put in place and this allowed IRCTC to expand beyond railway catering and take control of food plaza, food courts and other fast food units operated by other departments in the Indian Railways.

-As per experts, the diversified business gives IRCTC an assured business unlike many of its peers, who have to operate in a highly competitive environment.

-Additionally, in case of a crisis, the government can eventually come to the rescue, unlike a private enterprise. Thus being govt-backed is another big strength of the PSU.

-Angel Broking recommended subscribing the issue, quoting that," Recent tax reduction by Government to 25.2 per cent and increase in revenue from service charge for online ticketing will improve profitability substantially going forward. There is also a significant opportunity for the company to ramp up the catering business given a very large captive audience which is currently being underserved. Increasing business volumes from catering and packaged drinking water businesses, along with service charge for online ticket booking will drive earnings growth for the company between FY19-21."

-Stewart & Mackertich Wealth Management believes the stock is valued reasonably and thus recommended investors to subscribe to the issue.

-"We have a positive outlook on the company and we recommend investors to Subscribe to this issue," Anand Rathi analyst said in the note.

-Dharmesh Kant, Head- Retail Research, IndiaNivesh Securities said," Strong fundamentals and debt-free balance sheet along with decent return ratios; return on equity being 26%, operating margins of 20% and PAT margin at 15% augurs well. We expect revenue and PAT CAGR of 20% plus for the next couple of years. IPO looks conservatively priced at a PER of around 19 times based on FY19 earnings. We recommend subscribe."

-ICICI Securities recommended SUBSCRIBE to the issue at the offer price, adding that,"Inclusion of convenience fee on railway tickets, setting up of 10 water plants in next 2 years and recent tax reduction of corporate tax bodes well for EPS (earnings per share) growth."

-Naveen Kulkarni, Head of Research, Reliance Securities commented that," IRCTC is in steady business model, which is likely to grow at 12-15% in the next few years. The restoration of convenience charges for e-ticket from September 2019 is likely to generate additional annual revenue of Rs 4.5 billion" Reliance Securities, too have recommended SUBSCRIBE to the Issue.

The government-controlled monopoly can generate prospective investors or not, time will tell. But it won't be the only case of disinvestment planned this year. As per media reports, Indian Railway Finance Corporation (IRFC) is next in the line for disinvestment.