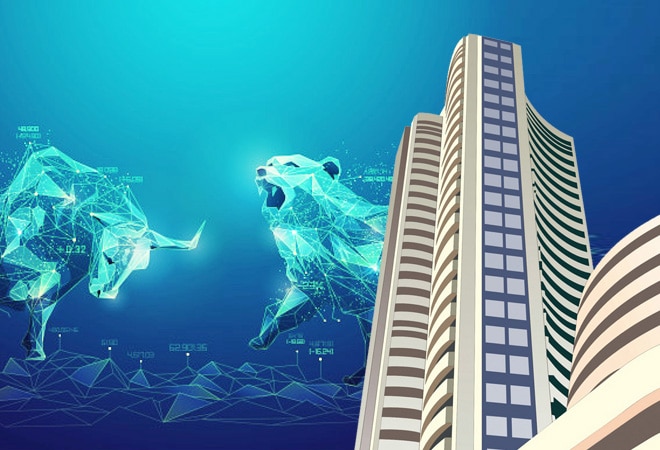 The Indian stock market ended lower for second straight session on Monday, albeit paring more than half of early losses, weighed down by weak macro data and partial lockdown in certain states in wake of rise in COVID-19 cases. The BSE Sensex ended 397 points or 0.78 per cent lower at 50,395, and the NSE Nifty settled at 14929.5, down by 101.45 points or by 0.67 per cent. In the bearish trade, the BSE Sensex and NSE Nifty touched intraday low of 49,799 and 14,745, respectively. In line with benchmark indices, broader markets also ended in negative terrain, with BSE Midcap and BSE Smallcap falling 0.72 per cent and 0.53 per cent, respectively. The market breadth, indicating the overall strength of the market, was weak. Out of 3,520 shares traded, 1,297 shares advanced, 1,985 declined and 238 remained unchanged. Among the individual stocks, Bajaj Finserv, Bajaj Finance, Bajaj Auto, Larsen & Toubro, Dr. Reddy's Laboratories were among top losers, falling between 1.5-3 per cent. On the other hand, Mahindra & Mahindra, Power Grid Corporation, IndusInd Bank, HCL Technologies and State Bank of India were among notable gainers.

"Markets opened in the red on the back of weak cues and drifted lower on higher WPI and partial lockdown in certain states. However, a spirited rally in Metals & IT stocks in Afternoon Trade with support from Financials helped Indices recoup part of the losses," says S Ranganathan, Head of Research at LKP Securities.

On the global front, Asian stocks ended on mixed note on Monday, ahead of meeting of the US Federal Reserve later this week. Japan and Hong Kong markets ended higher, while China's Shanghai Composite ended lower. Meanwhile, European stocks were trading higher on Monday as investors remained focused to upcoming Federal Reserve meeting. The US Fed is set to announce monetary policy on Wednesday.

Check highlights of the market action on BSE and NSE today.

"Index opened a day with mild gains but failed to sustain on the positive side & seen sharp slide and closed a day on a negative note at 14929 with loss of nearly one percent. The index showed some pullback after touching its rising trend line on the daily chart, going forward 14750 will be immediate & strong  support if managed to hold then some more pullback possible towards immediate hurdle zone of 15k mark followed by 15100 zone."

Shares of Pritish Nandy Communications rallied 9.81 per cent to hit 9.81 per cent upper circuit of Rs 23.50 on the BSE after Ratan Tata, Chairman Emeritus of Tata Sons and Chairman of Tata Trusts, has acquired a stake in the company through market purchases last week.

Shares of Vaibhav Global rallied 8.5 per cent in intraday trade to hit fresh 52-week high of Rs 4,513, in an otherwise broader market. The stock of e-retailer of fashion jewellery, accessories, and lifestyle products has surged 115 per cent in last three months on strong financial performance.

Tech Mahindra share price gained over 2 per cent in intraday trade on BSE on Monday, in an otherwise weak broader market, after the company received its board approval for acquisition of majority stake in Perigord Asset Holdings Limited.

Shares of PSU Bank witnesses selling pressure on Monday amid report that operations across the country were impacted due to two-day nationwide strike. State Bank of India (SBI), Indian Bank, Bank of India, Punjab National Bank, Canara Bank, J&K Bank, Union Bank of India, Bank of Maharashtra, Bank of Baroda declined up to 5 per cent.

In line with BSE Sensex, the BSE Realty index was also trading lower by 1.5 per cent. According to Amarjit Bakshi, CMD, Central Park says, "Although there is still a long way to go in the residential market, the worst is over. In reality, the challenges that residential real estate faced in 2020 will serve as a catalyst for the sector's long-term growth. Only trustworthy developers who are customer-centric and have a track record of delivering high-quality products will survive and thrive in the New Normal."

"Furthermore, end-users continue to drive demand. Larger homes in self-contained complexes with amenities such as a gym, green open spaces, and easy access to everyday necessities would be preferred. As work from home becomes more common, product metrics are likely to change. It's worth noting that listed REITs received a strong response in the primary markets, opening up a new investment opportunity for retail and institutional investors."

11:22 am : Craftsman Automation IPO in progress

Leading engineering firm Craftsman Automation's IPO opened today. Price band of the IPO has been fixed at Rs 1,488 to Rs 1,490 per equity share. The IPO comprises fresh issue of equity shares worth Rs 150 crore and offer-for-sale (OFS) of up to 45.21 lakh equity shares by promoters and existing shareholders.

The Rs 600 crore initial public offering (IPO) of Laxmi Organic Industries will open for subscription today. The price band for the issue, which closes on March 17, has been fixed at Rs 129-130 per share. The IPO comprises fresh issue of equity shares of up to Rs 300 crore and an offer for sale of equity shares up to Rs 300 crore by promoter Yellow Stone Trust. The firm has raised Rs 180 crore from 15 anchor investors on March 12. It allocated 1,38,46,153 shares at Rs 130 per share to anchor investors.

Also read: Laxmi Organic IPO to open today, should you subscribe to the issue?

10:25 am: MTAR Technologies lists at 85% premium over issue price

The Indian rupee opened higher at 72.71 against US dollar as compared to Friday's close of 72.78 per dollar, bucking weak cues from Indian equity market.

9:40 am: PSU Bank stocks under pressure

"Market trends are unclear. While the dollar index cooling to 9.16 is a positive for capital inflows the 10-year bond yield hovering around 1.64 is a concern. Also the rise in core inflation, mainly pushed up by commodity price rise, is a  concern. Looks like we are at the trough of the interest rate cycle. Recent Covid resurgence is another concern. An economy facing stocks are set to benefit from the rebound in growth. Investors should always remember the fact that market valuations are high & therefore vulnerable to correction."

The Indian benchmark indices, Sensex and Nifty, opened lower on Monday, undermining firm global cues and strong trading at Nifty futures on the Singapore Exchange. The BSE Sensex opened 154 points or 0.30 per cent lower at 50,637, and the NSE Nifty belled 26 points or 0.18 per cent lower at 15,004. Investors reacted to macro data which raised question over economic recovery. While the Consumer Price Index (CPI) or retail inflation spiked to 5.03 per cent in February, the Index of Industrial Production (IIP) contracted 1.6 per cent in January, after reporting growth in the previous two months.

The Indian benchmark indices, Sensex and Nifty, are likely to open start week on positive note, tracking firm global cues and strong trading at Nifty futures on the Singapore Exchange. At 9:00 am, the Nifty futures were trading 35.85 points or 0.24 per cent higher at 15,072.20, on the Singapore Stock Exchange, indicating a positive start at Dalal Street.

Laxmi Organic IPO to open today, should you subscribe to the issue?