SpiceJet on Tuesday said the complaint of alleged fraud filed by an individual against airline's Chairman Ajay Singh was "completely bogus" and a defamation suit will be filed against the complainant.

Gurugram police on Monday said an FIR has been filed against Singh, who is the Chairman and Managing Director of SpiceJet, based on a complaint by one Amit Arora for allegedly duping him on the pretext of allotting shares of the company. READ MORE

Shares of Adani Total Gas hit all-time high today ahead of the scrip turning ex-dividend on July 14. Adani Total has fixed July 15 as the record date to identify eligible shareholders for dividends. Payment for the dividend will be done on or after July 28.

Adani Total has announced a dividend of Re 0.25 at the rate of 25 per cent per equity share having a face value of Re 1 each fully paid up for the financial year FY22.

Sentiment around the stock was also upbeat after the Adani Group confirmed its entry into the race to acquire telecom spectrum. The spectrum will be used to create a private network to support its businesses from airports to power as well as data centres.READ MORE

“We expect a subdued 1QFY23 for pharma companies, owing to continued US generic price erosion, high Covid-led domestic base for most companies, RM inflation and higher freight costs. To compensate for the above factors, INR depreciation will provide some relief. In the US, there have not been any meaningful new launches this quarter. Ex-Covid, we expect domestic growth for the sector to be 10-12% yoy. Health care services: We expect a sequentially improved performance of India hospitals business, led by higher domestic and international footfalls, post a slightly subdued 4QFY22 due to Omicron impact. However we note that IP and OP volumes are yet to completely revert to pre-Covid levels. We note that Q1FY23 performance is unlikely to be as strong as Q3FY22, which benefitted from a superior case mix, as well as higher footfalls, due to pent-up demand. For the diagnostic companies, we expect sequential recovery of non-Covid volumes, given Covid sales will slip qoq. We expect non-Covid realizations per patient to be largely flattish qoq. For DLPL and METROHL, we expect partial benefit of accrual of synergies from the Suburban and Hitech acquisitions, respectively."

The large cap stock hit upper circuit of 5 per cent in volatile trade today. Adani Wilmar stock rose 5 per cent to an intraday high of Rs 648.10 against the previous close of Rs 617.25 on BSE.

10:48 am: GST tax on online gaming likely to be finalised today

The Group of Ministers (GoM) on online gaming, casinos and horse racing will be meeting today in the afternoon to finalise their report on goods and services tax (GST) taxation.

The group of ministers in their meeting last month, before the GST Council meeting, had proposed that the GST be hiked by 10 per cent to the highest slab rate of 28 per cent. Read More

Shares of Delta Corp, which form part of ace investor Rakesh Jhunjhunwala's portfolio, hit an intraday low of Rs 177.05, down 2.16 per cent against the previous close of Rs 180.95 on BSE.Read more 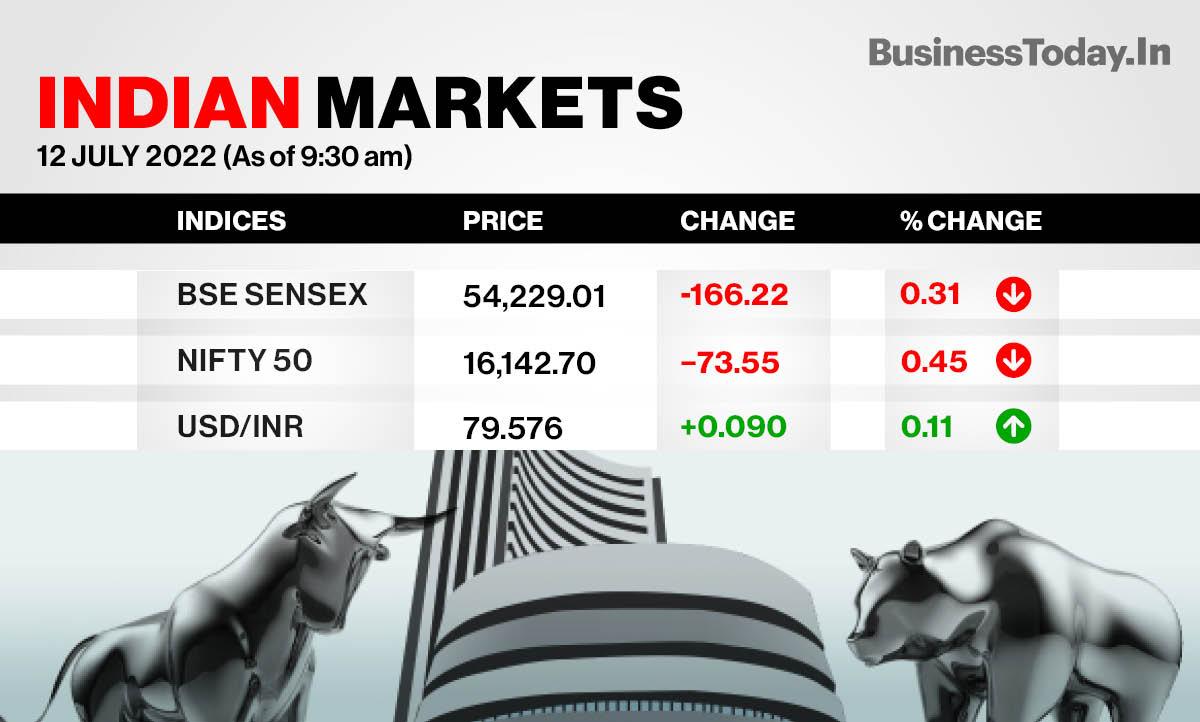 "Caution will be the buzzword for today's trading as overnight US benchmark indices faltered while SGX Nifty and other Asian gauges too have retreated sharply in early trades. While there seems to be no respite from FII selling, DIIs too joined the bandwagon and offloaded shares in yesterday's trades, selling to the tune of Rs 170 crore and 297 crore, respectively. Although the selling was not that aggressive but it's enough to dent bullish sentiments. The technical indicators can accelerate towards south only if Nifty slips below 16,027 mark, while hurdle is seen at 16,500 zone." "The short-term uptrend status of Nifty remains intact, and the market is taking temporary halt before showing further up move in the near term. Hence, the current range movement within 16,100-16,250 levels is likely to extended for the next session. A sustainable move above 16,300 could be viewed as strengthening of upside momentum."

The Indian market is likely to open lower today as SGX Nifty fell 132 points to 16,066. The Singapore Stock Exchange is considered to be the first indication of the opening of the Indian market.

The Indian market closed lower amid high volatility in the last hour of trade on Monday. Benchmark indices fell after three days of gain on heavy selling in IT stocks and weak trends in the global markets. Sensex declined 86.61 points or 0.16 per cent to end at 54,395.23. Nifty slipped 4.60 points or 0.03 per cent to close at 16,216.