Many studies, including those by top government bodies, identify top polluters of Delhi air as industries, vehicles and dust; the annual, ritualistic bashing of Punjab farmers in winter months only helps in shifting the blame and allows government agencies to evade accountability There is more to Delhi's air pollution than stubble burning, industrial and vehicular emissions and dust. Those are geographical and meteorological factors

It is that time of the year when India ritually engages with Delhi's air pollution, primarily focussing on stubble burning in Punjab, although Haryana and western Uttar Pradesh also contribute to it. Once Diwali is over, everything goes back to normal, as if air pollution is limited only to winter months of October and November.

That air pollution kills more than a million Indians a year; that it is a year-round phenomenon or that it has serious consequences for climate change don't figure in this brouhaha.

This ritualistic bashing of farmers continues year after year because it helps authorities responsible for pollution control in multiple ways: (i) it diverts attention from far bigger sources of air pollution (stubble burning is not one of those) (ii) shifts blames to farmers and (iii) gives those who need to be questioned and held accountable a free passage.

Air pollution kills millions worldwide every year in which India and China figure at the top. The focus of global and national studies on air pollution is smaller particulate matter PM2.5 (particle size of 2.5 microns or smaller) because these are the ones that enter lungs and other parts of body easily and deeply, posing serious threat to life.

In January 2019, medical journal Lancet published a study showing that air pollution (both indoor and outdoor) claimed 1.24 million Indian lives in 2017 alone, or 12.5% of the total deaths that year. It said the life expectancy of Indians would have been 1.7 years more had India's air quality been better.

The study found the concentration of PM2.5 in outdoor air higher in Uttar Pradesh, Haryana, Delhi, Punjab and Rajasthan, while those in indoor air (caused by firewood burning) were higher in Chhattisgarh, Rajasthan, Madhya Pradesh and Assam.

When the findings were first reported, the then environment minister (now health minister) Dr. Harsh Vardhan, a professional medical practitioner, dismissed them, saying that he did not agree that air pollution kills people. In his view it merely affected health.

What are the top sources of Delhi's air pollution?

Several studies on Delhi's air pollution have been published in recent years. The findings common to all these are: (i) stubble burning is seasonal, restricted to a few days of October and November (ii) in overall contribution to air pollution the share of stubble burning or biofuel/biomass is insignificant and (iii) the major sources of air pollution are industrial and vehicular emissions and dust.

Premier environmental research body TERI carried out "source apportionment" or identification of sources of PM2.5 and PM10 in Delhi's air (and NCR), which was published in August 2018, titled "Source Apportionment of PM2.5 & PM10 of Delhi NCR for Identification of Major Sources". Air samples and satellite images were collected in 2016.

The following table, an extract from this report, shows the sources of PM2.5 and PM10 (particle size of 2.5 micron or less and 10 micron or less, respectively) in Delhi's air - in winter and summer months. "Agri Burning" here refers to burning of agricultural residues (stubble burning) - both local and transported from outside Delhi (stubble burning in Punjab and elsewhere) - which contributed the least: 4% in winters and 7% in summers to both PM2.5 and PM10.

The report took account of stubble burning and said: "...the burning of agricultural residues in the farms of Punjab, Haryana, and Uttar Pradesh also contribute significantly in specific seasons."

A 2018 study by the government's own System of Air Quality and Weather Forecasting and Research (SAFAR-India), titled "High Resolution Emission Inventory of Major Air Pollutants of Mega City DELHI for 2018 under SAFAR", prepared an "emission inventory", the first step to "source apportionment" that the TERI did. 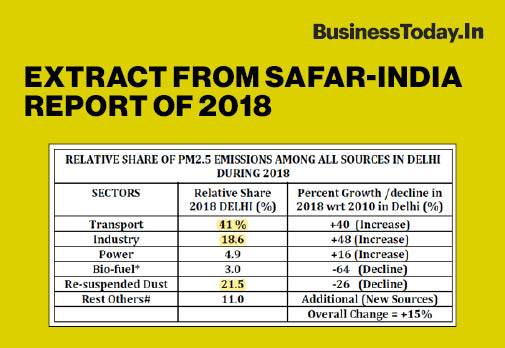 There are several studies that prepared "emission inventory" to identify and address the local causes of Delhi's air pollution and ignored season and episodic phenomenon of stubble burning in Punjab and other neighbouring states, since Delhi's air remains above acceptable pollution levels for most indicators throughout the year.

The obvious question that arises from these findings is: Why industry is never questioned or blamed for Delhi's air pollution in spite of it being the top contributor?

Other contributors (vehicular emissions and dust) have attracted the attention of authorities and courts and mitigating measures have been launched, even though episodically, but polluting industries have never been questioned or asked to mend their ways. They always get a safe passage.

Apart from directly contributing to PM2.5, polluting industries emit gases like sulphur oxide, nitrogen oxides, ammonia and others which are toxic and also lead to the formation of "secondary" PM2.5 through chemical reactions in the air. A 2016 IIT Kanpur study found "secondary" PM2.5 contributed 51% to the total load of PM2.5 in Delhi's air.

This IIT Kanpur study, "Comprehensive Study on Air Pollution and Green House Gases (GHGs) in Delhi", pointed out that thermal power plants around Delhi (in a radius of 300 km with installed capacity of over 11,000 MW) were expected to contribute to "secondary" PM2.5 and that an earlier study found power plants contributing nearly 80% of sulphates and 50% of nitrates in the air.

It also drew attention to Delhi's winter's "very hazy and characterised by smoky and unhealthy air" and primarily blamed it on polluting industries: "The consistent and major contributors appear to be secondary particles and combustion-related emissions with modest contribution of burning of MSW (municipal solid waste)."

A 2018 "reference note" of the Lok Sabha Secretariat on Delhi's air pollution and meant for Members of Parliament (MPs) (marked "for the use of Members of Parliament" and "not for publication" but is available on web) said air pollution control devices installed in many industries were "found in idle conditionswhich lead to the emission of pollutants directly into the atmosphere without any filtration".

"Further", it said, "construction of short chimneys also restricts the polluting gases to escape into the upper layers of the atmosphere". It did not mention any punitive action against these polluting industries.

A short trip to Haryana's Bahadurgarh on Delhi's outskirts on any winter day would demonstrate how these two factors (non-filtration of emissions and low chimneys) fill the air with low hanging toxic fumes capable enough to end the trip in a hospital bed.

No such laxity has been shown to other major pollutants (vehicular emissions and dust). For example, the Delhi government ran an Odd-Even scheme for regular vehicular traffic for some years (not all) and there have been court instructions on dust control leading to sprinkling of water on trees and streets to reduce dust.

Not once did a government or court questioned or acted against the polluting industries.

The Supreme Court (SC) was so worried about stubble burning this year that it set up a committee under retired Justice MB Lokur to monitor it, notwithstanding the fact that the Central Pollution Control Board (CPCB) has deployed 50 teams across 5 states to check air pollution.

Since stubble burning's contribution to Delhi's air pollution is limited to winter months, the SAFAR-India's daily tracker restricts it to these months.

Here is its tracker from 2019, showing the contribution of "external biomass" burning (stubble burning in Punjab, Haryana and Uttar Pradesh) to Delhi's PM 2.5 level. A multi-institutional study published in March 2020 and carried out by Pune's Indian Institute of Tropical Meteorology (IITM) which runs the SAFAR-India, Mohali's Indian Institute of Science Education and Research (IISER), Colorado's National Centre for Atmospheric Research (NCAR) and others found: "On average, around 20% of PM 2.5 concentration in Delhi during the post-monsoon season (October-November) was found to be contributed by non-local fire emissions."

Another multi-institutional study of 2020, involving IITM (Pune), CPCB and others, found stubble burning in northern states during October-November 2018 contributing1% to 58%to PM2.5 concentration in Delhi's air. Why Delhi's air pollution is acute in winter?

There is more to Delhi's air pollution than stubble burning, industrial and vehicular emissions and dust. Those are geographical and meteorological factors.

Delhi is land-locked, unlike Mumbai or Kolkata, depriving it the advantages of sea breeze blowing away pollutants. It has hot desert (The Thar) on west, hot central plains on south and cool hills on north; wind directions change frequently and its weather is extreme (hot summers and cold winters).

In winter, its cold and foggy air traps pollutants at lower heights, forming a toxic canopy that chokes people. Into it blows in smokes from Punjab's stubble burning but that does not raise the PM2.5 level on all days of October-November.

This variation in stubble burning's contribution to PM2.5 was explained by the 2020 study by IITM, CPCB and others mentioned earlier ("Objective evaluation of stubble emission of North India and quantifying its impact on air quality of Delhi") which found a variation of 1% to 58% in October-November 2018.

It said the highest contribution to PM2.5 (58%) was recorded on November 5 and the lowest (1%) on November 17, 2018 even though both occasions witnessed "reasonably high fire counts".

The difference, it said, was due to wind directions. On November 5, it blew from north-west - the stubble burning sites of Punjab and Haryana -and on November 17 from south where no stubble burning was witnessed.

It also drew attention to "mixed layer height", the upper lid (layer) of surface atmosphere which prevents particles and gases generated from surface to escape into the upper atmosphere. On November 5 this layer was very close to the surface at 162 metres and on November 17, it was much higher at 434 metres.

Higher wind speed also plays a big role. Experts would tell you if wind speed is high it would carry stubble burning smoke farther away from Delhi, towards the central India.