A study by two multinational giants UBS and PwC says "huge fiscal and quantitative easing packages" given by governments around the world drove a V-shaped recovery of stock markets and billionaires' wealth surged to $10.2 trillion by the end of July 2020 Here's a new twist to the US presidential elections relevant for the rest of the world.

President Donald Trump is warning wealthy Americans that if voted to power his opponent and Democratic candidate Joe Biden would "do big, big tax cuts, big, big tax increases, like at a level that's never been seen". He told Fox News that Biden's tax plan would be a "disaster" and put America into "depression, the likes of which our country has never seen before".

Biden proposes to tax 2% of wealthiest Americans to reduce income gap and eliminate Trump's tax bonanza to them. Trump has been very generous to the wealthy, first cutting corporate and income tax and giving exemptions in estate and gift tax, which benefitted the wealthy more than ordinary Americans, and then altering tax laws in his pandemic relief packages to help them even more.

Trump is the first billionaire President of the US (net worth of $2.3 billion as on October 16, 2020), according to Forbes magazine. He has claimed to have paid millions of dollars in income tax to the US government even while refusing to disclose tax filings.

Investigations by the New York Times (NYT), however, revealed that he paid just $750 tax the year he won the presidency (2016) and the next (2017) - less than what ordinary Americans pay.

The NYT investigations also revealed that Trump "had paid no income taxes at all in 10 of the previous 15 years - largely because he reported losing much more money than he made".

Biden is not alone. The global campaign to tax billionaires has gathered momentum in the US and Europe in recent times, particularly because of a surge in their wealth during the pandemic while the global economy has tanked and millions have lost their jobs and incomes.

The US senator (independent) Bernie Sanders recently moved Make Billionaires Pay Act to levy one-time 60% tax on billionaires' gains during the pandemic to recapture a part of their "extreme wealth gains". This aims to raise $420 billion for paying healthcare expenses of uninsured or underinsured households.

Sanders' move is a throwback to "excess profits tax" imposed post-World War I to generate resources for reconstructing war-ravaged Europe. The logic then was that some businesses (like food and ammunitions) had profiteered, made windfall gains due to war-time situations without adding value and hence, was "unearned".

That move didn't end well, as the subsequent history reveals, leading to a debt-driven business model (interest on loans is tax free) that uses public money to run private businesses and make private profits but shifts business risks to taxpayers (NPAs). (To know how, read "Rebooting Economy XIV: Debt vs equity; why businesses are debt-driven ")

Many global agencies and institutions, like Tax Justice Network (TJN) and Americans for Tax Fairness (ATF), Forbes, Institute for Policy Studies (IPS) and Inequality.org etc., have been seeking higher taxes on the wealthy and/or actively collaborating in tracking billionaires' wealth during the pandemic.

Their earlier update of September 28 said the US billionaires had added $845 billion since March 18 amidst ruins all around:

Forbes said the pandemic saw US billionaire Jeff Bezos becoming the world's first ever $200 billionaire in August. It also said between April and July, billionaires worldwide added their wealth by 27% - the highest ever.

What led to such a surge in billionaires' wealth?

The answer comes from "Riding the Storm", a report co-published by two multinational giants UBS and PwC on October 7, 2020. It said "the V-shaped equity market recovery from April to July 2020 propelled billionaire wealth to a new high" and that the wealth of billionaires (2,189 of them) increased to $10.2 trillion at the end of July 2020.

What led to this V-shaped stock market recovery?

Their report explained: "Billionaire wealth is loosely correlated with equity markets, due to holdings in listed companies, and a few weeks makes a big difference. From the end of March, governments' huge fiscal and quantitative easing packages drove a recovery in financial markets. By the end of July 2020, billionaire wealth was back above its 2019 level."

The Forbes' report on this finding helpfully explained how governments helped billionaires through their stimulus packages. About the US, it said: "The CARES Act coronavirus relief package has only helped those (stock market) gains. A loophole in March's legislation allowed millionaires to benefit to the tune of about $1.7 million from the government. A further 133 large companies have since received $5 billion from the Treasury Department."

As for the UK, it said "stimulus packages worthover 16 billion pounds ($20.6 billion) have gone directly into billionaire-owned companies, data in June revealed".

Why did stock market boom help the wealthy alone?

Forbes explained this too: More than 50% off stocks and shares owned by American households were held by the richest 1% in February 2020 and as stock markets boomed since March, the wealthiest saw the biggest gains.

Isn't it interesting that stimulus packages led to a V-shaped recovery of stock markets alone but not any other segment of economy?

India's case is not very different.

It said: "Amid the Covid-19 pandemic which hit India hard and led to a sharp economic contraction, half of the nation's 100 richest on the 2020 Forbes India Rich List saw gains. Their collective net worth rose 14% to $517.5 billion from a year earlier, even as the benchmark BSE Sensex stock index remained flat from a year ago."

It didn't attribute this rise entirely to stock market gains and explained individual cases. However, stock markets remain the only economic activity to witness a sharp V-shaped recovery. The BSE Sensex crossed the 40,000-mark on five occasions in the first fortnight of October, coming close to its all-time high of 42,063 recorded on January 17, 2020 - a quarter (Q4) that saw the GDP plunge to a new low of 3.1%.

The same happened with Nifty50 also, which crossed the 11,930-mark thrice in the first fortnight of October, coming very close to its all-time high of 12,362 recorded on January 14, 2020.

Here is how BSE Sensex and Nifty50 have behaved since January 2020. As of October, the closing mark of October 15 has been taken. 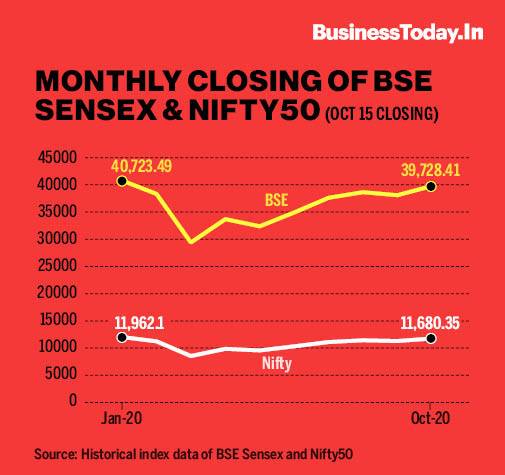 What happened in October to warrant the surge?

The RBI and National Statistical Office (NSO) released high-frequency data on October 9 and 12, respectively. The RBI projected the GDP growth to plunge to minus 9.5% for the full fiscal year. A few days later (October 13), the IMF revised its India's growth projections downward to minus 10.3%. Not to forget the August end NSO data showing Q1 of FY21 had plunged to minus 23.9% - the sharpest fall among all major economies.

The RBI also released high-frequency indicators showing improvement but those related only to the organised sector, leaving out the unorganised sector contributing 45% to the GDP. Interestingly, these gains were plotted on year-to-date (YTD) basis from February 2020. YTD growth is counted from the beginning fiscal year - January for most developed countries, and April for India. What is the logic of plotting it from February 2020 except to paint a picture rosier than what it actually is.

The NSO and other RBI high-frequency data for October 2020 revealed that the gains made in June and July had reversed in August and September, particularly in industrial production, credit outflow and consumer sentiment on current economic situation, employment, income and spending. (For more read "Rebooting Economy 37: Do high-frequency data suggest V-shaped recovery? ")

On September 29, theBusiness Todayhad published a report on corporate filings for Q1 of FY21, saying that about 3,100 non-financial firms (non-BFSI firms) reported a loss of Rs 6,911 crore, against a profit of Rs 95,950 crore in the corresponding previous quarter - a drop of over Rs 1 lakh crore. More than half of these firms had slipped into the red. (For more read "Q1 profit erodes Rs 1 lakh crore; India Inc. slips into the red")

The reason for the stock market boom is same as elsewhere: liquidity infusion.

India's stimulus packages are liquidity-heavy. Of the Rs 21 lakh crore package announced until October 11, 91-93% constituted liquidity infusion (collateral-free loans and other credit facilities to industry and individuals) and the rest 7-9% fiscal spending. The third one announced on October 11 (Rs 1.01 lakh crore), is nothing more than re-juggling and frontloading of existing fiscal plans.

Disconnect between stock market and economy

Here is a new study on stock market's link with economy.

Even while the US President Trump was boasting about stock market booms to claim credit in handling the pandemic, the Ohio State University published a study on October 6 2020, "Has the stock market become less representative of the economy?"

It looked at employment generation by listed US firms, including those at the top in market capitalisation and found that these firms "contribute less to total non-farm employment and GDP now than in the 1970s".

From John Maynard Keynes to Joseph Stiglitz and Paul Krugman, many liberal economists (capitalist) have likened the stock market to a "casino".

But the neoliberal economists (radical right) continue to advocate Market Efficiency Hypothesis (MEH), which posits that investors are rational, well-informed and market is efficient and self-correcting. They argue a free-market always gets the asset prices right. (For more read "Rebooting Economy I: Why stock market is booming when COVID-19-hit economy sinks " & Rebooting Economy II: What stock market boom means to people and economy ")

No evidence has been found for any of the MEH concepts in the past 40 years and yet the radical right has not flinched there. Trump is a shining example of it who likes to think stock market represents economy and a booming stock market means well-being of people.

Personal finance tips for famous people: what celebrities need to do with their money