High and middle-income countries that have consistently performed well in PISA, the global test of quality schooling, notably rely on public schooling and public funding of schooling. India, which participated in it once in 2009 and came second last, does the exact opposite 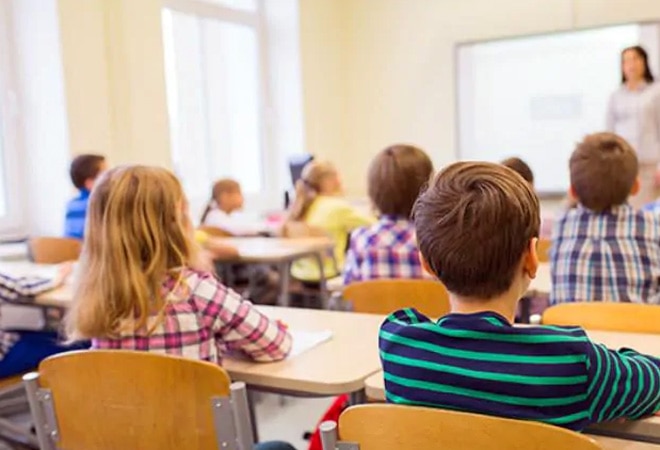 The biggest lesson from Finland that India can learn is its remarkable "common school system (CSS)" in which all children in a locality study together, irrespective of their socio-economic background

India's excessive reliance on private schooling and private funding of schooling has neither improved literacy rate nor enrolment of children in schools.

India is a global outlier when it comes to quality and management of school education.

Do developed economies rely on private schooling or private funding of schooling?

In 2012, the OECD (Organisation for Economic Co-operation and Development) presented comparative data on students enrolled in public (government) schools and public funding of schools in 63 of 74 countries that participated in the Programme for International Student Assessment (PISA) in 2009 - the only time India participated in this global test of quality education but did not find a mention in this list. India stood second last among the 74 countries, next to Kyrgyzstan.

Most of these countries scored in high 80s and high 90s in both student enrolment in public (government-run) schools and public spending on schooling.

The following graph presents 14 of those countries, selected for wider representation and mapping of long-term changes in private schooling. 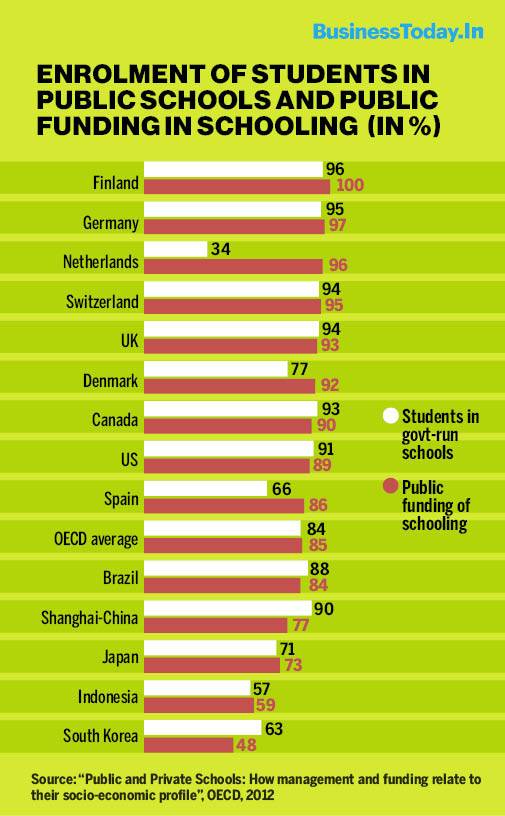 The OECD average - 84% of students enrolled in public schools and 85% of funding in schooling is public - is at the bottom of the graph.

PISA tests 15-year-olds in mathematics, science, and reading. It is held by the OECD once every three years, the last one in 2018, and is open to all.

India stopped participating in it after its poor performance in 2009. However, it would be doing so in PISA 2021 - 12 long years later. The union territory of Chandigarh and central government-run Kendriya Vidyalayas and Navodya Vidyalayas would represent India then. In 2009, Himachal Pradesh and Tamil Nadu represented the country.

In the last PISA of 2018, the top 10 countries (of 79 high and middle-income countries that participated) were (in descending order): Beijing-Shanghai-Jiangsu-Zhejiang (China), Singapore, Macao-China, Hong Kong-China, Estonia, Canada, Finland, Ireland, South Korea, and Poland.

The four eastern provinces of China (Beijing-Shanghai-Jiangsu-Zhejiang), which topped the text, were not the only Chinese winners. Macao (China) ranked 3; Hong Kong (China) ranked 4 and Chines-Taipei ranked 17.

In 2019, the OECD studied changes in preference for private schooling in countries consistently participating in PISA.

It tracked changes between 2000 (when PISA tests began) and 2015. The organisation could get complete details for only 33 countries and concluded that "in most of the countries that have participated in PISA since 2000, this share (enrolment in private schools) has not evolved significantly."

For the OECD countries (24 members) the average change was (plus) 1% in favour of private schooling. It said: "Such a dramatic increase may be related to the adoption of market-oriented policies that provide public funding to independent schools, such as academies or "free schools"."

India relies on private schooling and private funding of schooling

That India has low-quality school education by international standards is known. Nevertheless, it does the reverse and promotes private schooling at the cost of public schooling even though it is a lower-middle-income country housing the maximum poor in the world.

A 2020 paper by non-government Central Square Foundation mapped the growth of enrolment in public and private schools since 1978. It found that by 2017, enrolment in private schools had gone up to 48%, from 29.2% in 1993. The paper used official U-DISE 2019 data hosted by the central education ministry. 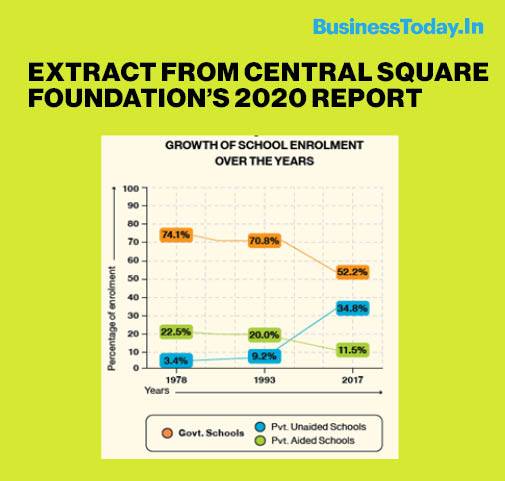 As for the cost of private schooling, the latest National Statistical Office (NSO) report on Household Consumption Expenditure on Education in 2017-18, released in July 2020 shows, on average, the households spent 3.7-12.5 times more for private schooling (Class I to Class XII) - as reproduced below. 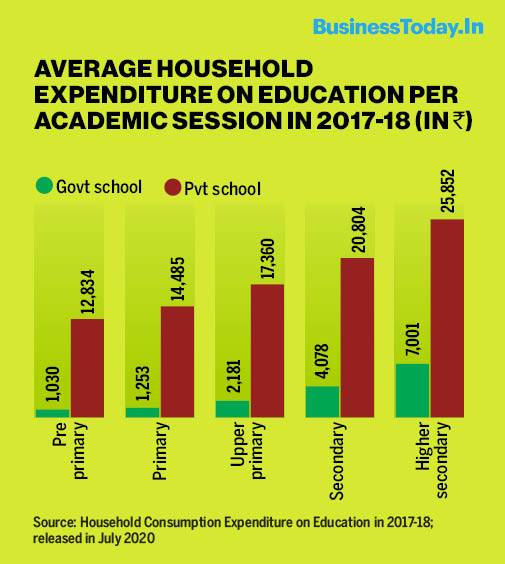 That need not be the case, though.

Private education is a not-for-profit business. The government provides land free of cost, and education is non-taxable too. A Supreme Court order of 2020 said education institution "is by definition 'charitable'" and profiteering is particularly forbidden in the TMA Pai Foundation & Others vs State of Karnataka & Others.

In 2018, another Supreme Court order (Union of India vs Moolchand Khairati Ram Trust) emphasised how in 1949 the government started promoting private schools and hospitals "to achieve the larger social objective of providing health and education to the people", and not make profit out of it.

But the ground realities are completely different.

As for public funding of education, India's record is abysmal.

The central and state governments together spent 3.1% of GDP on education in FY19 - higher than 2.8% during the previous four fiscals but half of the target set in the National Policy on Education (NPE) of 1968, which India keeps repeating ad nauseam since then, the latest being the brand new National Education Policy of 2020. What lessons can India learn from PISA countries?

Who are the top performers in PISA tests?

A Washington-based think tank, the National Centre on Education and the Economy (NCEE), looked at the PISA results over a long period of time and listed the top performers: Canada, China (including its provinces of Beijing-Shanghai-Jiangsu-Zhejiang which topped in PISA 2018), Estonia, Finland, Hong Kong, Japan, Poland, Singapore, South Korea, and Taiwan.

Some of the factors it identified for their excellence included quality training to teachers, autonomy to schools and teachers, targeted policy directives, removing pressures on students, etc.

Estonia, a tiny north European country, is one of the success stories. It was ranked 5 in the PISA 2018 test. It gained independence in 1992. "Since that year, the Estonian economy has grown nearly tenfold, with a well-developed information technology sector central to that growth. Part of this growth strategy was the development of an education system to foster a high-tech, high-skill, high-wage economy." That's how the NCEE described its success story.

Canada (ranked 6 in PISA 2018) has consistently performed well since PISA started in 2000. It does not have a centralised education system; its provinces are free to design and run their own education system.

But these provinces collaborate and use each other as benchmarks in policy decisions and initiatives. The NCEE writes that in 1999, their education ministers published "Victoria Declaration", which emphasised that their goals were "focused not only on development of individual students, but on the development of Canada's social and economic goals".

The declaration outlined a set of practical goals, including increased collaboration between the provinces on curriculum initiatives and best practices, expanding access to higher education, promoting more policy-based research, etc.

Finland is another global example of excellence in school education (ranked 7 in PISA 2018).

Its education system, widely studied by other countries since 2000, is built on high-quality teachers, "integrated system of policies and structures" and a development plan for education and research once every four years. A group of World Bank experts commented in 2018 on how the country's "short school days, scant homework, flexible curriculum, full teacher autonomy, big focus on arts and sports" have paid rich dividends.

The biggest lesson from Finland that India can learn is its remarkable "common school system (CSS)" in which all children in a locality study together, irrespective of their socio-economic background. In simple words, children of ministers, bureaucrats, and their drivers, cooks living in the same locality study together, the logic being "all children can achieve at high levels, regardless of family background or regional circumstance".

In sharp contrast, India practices a highly segregated system of schooling. Neglected and low priority cheap government schools are meant primarily for the socio-economically disadvantaged and high-cost English-medium schools for the rich.

Long ago, public discourse on education in India talked about CSS but it died down because policymakers and policy influencers paid no attention. That is not surprising. For example, ministers, bureaucrats, and rich businessmen in Delhi send their children to the exclusive Sanskriti School of Chanakyapuri, other elite private schools, and international schools that have come up around Delhi, or the top-grade boarding schools in the hills of many states. All of these are out-of-bounds for lesser mortals.

Another aspect of this segregation on socio-economic ground is its brand new National Education Policy of 2020 (NEP 2020) which talks of a "three-language formula" in schooling and beyond, 52 years after the NPE of 1968 elaborated on this.

What is this formula? The NEP 2020 says: "Wherever possible, the medium of instruction until at least Grade 5, but preferably till Grade 8 and beyond, will be the home language/mother tongue/local language/regional language."

It also says that "at least two languages would be "native to India" and that it would be applicable to both public and private schools."

Now which minister, bureaucrat, and rich business person will send their children to non-English medium plebeian schools? And how many private schools will convert to mother tongues as their medium of instruction until Class V or VIII to honour the NEP 2020?

This is not an argument against the usefulness of teaching in mother tongue, local or regional language. It is about educational apartheid, the socio-economic segregation of schooling: one for the privileged, the other for the non-privileged. The three-language formula is likely to perpetuate this.

The NEP 2020 does not do that and no wonder it has sparked off protests in Tamil Nadu and elsewhere who fear Hindi will be imposed on them, even though Hindi (or English) is not mentioned in it.