Without quality education, no economy can progress, at least not in today's technology and knowledge-driven globalised world order. Economists and policymakers know this well yet pay no attention Appointing teachers of higher learning on contract, temporary or ad hoc basis without job security or social security is the norm, not an aberration in India

One of the major causes of India's continued backwardness has been its dismal quality of human capital. The state of affairs is so scary that the government often doesn't find the courage or let the full facts be known, barring occasional bouts of catharsis.

The only official document that provides a complete picture of the quality of human capital in India's workforce was published in November 2012, titled, "eSkill Development". It was the work of the man who brought the telecom revolution to India, Sam Pitroda. He headed the National Knowledge Commission and was adviser to the then Prime Minister Manmohan Singh.

Three key revelations were: (i) "38% of Indian workforce is illiterate, 25% has education up to primary school level and the remaining 36% has an education level of middle and higher-level" (ii) "80% of Indian workforce does not possess any marketable skills" (iii) "among persons within the age group (15-29 years) only about 2% have received formal vocational training and 8% non-formal vocational training... The comparative data for developed economies is Korea (96%), Germany (75%), Japan (80%), and the United Kingdom (68%)".

No official document since then has attempted to update this information. The last attempt was made in 2016, which was a half-hearted one and mentioned only the skilling part. That was the labour ministry's Report on Education, Skill Development and Labour Force (Volume III), 2015-16, released in September 2016.

It said nothing about the education level of the workforce, though a lot was said on the state of education in general. The employment-unemployment surveys (EUSs) that formed the basis for this report (5th EUS), have been discontinued. The sixth survey (EUS) was conducted but its report was not released.

The only official who has expressed his disapproval about poor quality education in recent times is VK Saraswat, a member of the government think tank Niti Aayog. While releasing a private report on education in April 2019, he said: "If we neglect higher education, we neglect growth of the nation as a whole because higher education contributes to the nation's growth. If we have to transform our demography, we have to take a look... the situation is grim and not a happy situation. People say a large number of graduates and PhDs are coming out, but we know the quality of those products/graduates/PhDs."

What really is happening to Indian education? Here is a closer look.

Do education ministers count in India?

On August 11, 2020, newspapers across the country carried an unusual piece of news.

One way of looking at it is as a positive development, which is how the newspapers approached it, notwithstanding the mismatch in his qualification: Class X pass or Class XI?

The other way is to treat it as a disturbing development: What justification is there for an Indian state's choice of "under-qualified" person to run the education ministry more than 70 years after independence? According to Jharkhand's official website, there are 395 universities and colleges in the state. How well would those educational institutions be provided quality leadership?

Here's more about the case, gleaned from those reports: the minister, Jagarnath Mahato, had set up the very educational institution in which he was seeking admission way back in 2006; he is chairman of its governing body; it is a government-aided intermediate college named Devi Mahato Memorial Intermediate College (DMMIC) and its teachers have not been paid for four months.

Here is more: Mahato is the minister for school education and literacy. He told Business Today that Chief Minister Hemant Soren holds charge of higher education but has delegated the authority to him to field questions in the Assembly. Soren is Class XII pass, according to his election affidavit. Conversations with local journalists revealed Mahato is the de facto higher education minister.

Puducherry's education minister PML Kalyanasundaram gets caught using a proxy for his Class X examination conducted by the Tamil Nadu government. As police chased him, he disappeared, sacked as minister in absentia, later arrested and jailed for two years. Last heard, he was acquitted of the exam fraud in 2013 by a Tamil Nadu court and was waiting to get back to his ministerial job kept vacant all this while.

At the national level, the situation is disturbing too.

The incumbent central education minister Ramesh Pokhriyal 'Nishank', who piloted the National Education Policy 2020 (NEP 2020), courted controversy for claiming multiple doctorate degrees, two of which are from an unrecognised open university of Sri Lanka, as an RTI reply revealed and newspapers duly reported. A court case has been filed against him, the fate of which is not yet known. His profile on the ministry's website does not mention his educational qualifications.

One of his predecessors was Smriti Irani, who initiated the NEP 2020 by appointing a committee led by former cabinet secretary TSR Subramanian who is no longer with us. She too landed in controversy for providing conflicting information about her educational qualifications. A court case was filed, the fate of which is not clear. Her electoral affidavits were found missing from the official website of the Election Commission of India (ECI).

These four cases are not about individuals or politicians or their educational credentials. It is all only about the education ministers in the state and at the Centre. The choices reflect the priority accorded to a critical function in a developing economy.

There is no point in the old and cliched argument that educational qualifications or degrees don't necessarily reflect education or equate with competence or knowledge. This argument negates the very concept of institutional education.

Moreover, there is little space for such an argument after more than 70 years of the mid-night tryst with destiny in 1947. That thousands of highly qualified people are unemployed, queuing up for manual jobs or engaged in selling vegetables, pani puri and other menial work all over India is not a revelation.

The huge popularity of the rural job guarantee scheme MGNREGS, providing livelihoods (manual jobs) to millions of individuals, is evidence enough. Currently, 203.5 million individuals are MGNREGS work cardholders and 64.7 million individuals worked under the scheme in FY21 (since April 1), according to the official website.

Here is just one headline before the lockdown hit, among several others such news, to dispel the notion of selective use of information at the time of pandemic-induced economic disruptions.

The text revealed there were 28,000 post-graduate candidates among them.

Do teachers count in India?

On July 30, 2020, another piece of shocking news hit the headlines.

The apex court had earlier upheld a high court order setting aside the state's 2003 employment policy on procedural grounds and quashing the appointment of thousands of teachers. The state was asked to frame a new policy, which it did in 2017 but continued with ad hoc appointments claiming that there was a shortage of teachers and the recruitment process mandated in the new policy, public advertisement seeking candidates and written examinations to select etc., could not be completed in time.

When a contempt proceeding was initiated this year for continued ad hoc appointments, the state ran to the apex court seeking re-appoint of those teachers to grade C and D posts lying vacant (in a time of job scarcity, this too is shocking in equal measure). It can be safely assumed that the state had consulted and secured their prior consent before proposing their re-appointment as peons, gardeners, cooks, night guards, etc.

Malfeasance in the appointment of teachers is not unknown.

Former Haryana Chief Minister Om Prakash Chautala landed in jail in 2013, along with his son Ajay Chautala, for alleged corruption in the appointment of teachers. While the father is in jail, the son got out in 2019 after the grandson, Dushyant Chautala, became deputy chief minister of Haryana.

Nearly 43% of Delhi University faculty are "ad hoc" teachers, working on a 4-month contract for years. The contract gets renewed after every four-month period with one-day break in service to mark discontinuity and pre-empt any claim for a permanent teaching job. The ad hoc teachers get no increment, no promotion, no social security benefits like PF, sick leave, maternity leave, medical benefits, etc. They are stuck at the same entry-level pay of an Assistant Professor even after 10, 15, and 20 years of teaching.

Ray says these ad hoc teachers tick all the qualifying norms set by the University Grant Commission (UGC). The only silver lining is they get paid as per the UGC scale, although at the very same entry-level year after year.

Then there are "guest teachers" in DU.

Ray says 4,000 guest teachers are teaching in the Delhi University's School of Open Learning (SOL) and Non-Collegiate Women's Education Board (NCWEB). This is a different category and is not counted among the 10,500 teachers.

Delhi University is no ordinary institution. It is a central university, one of the very top in India to which students flock from all around India. It was set up in 1922 through a central law. In the 2020 ranking of universities by the Union Ministry of Human Resource Development (MHRD), released recently, DU was placed at number 11.

An interesting side about the MHRD ranking: though the parameters for ranking include the state of faculty, the DU score sheet does not even mention it.

Appointing teachers of higher learning on contract, temporary or ad hoc basis without job security or social security is the norm, not an aberration in India.

Here is another example from July 2020.

Another premier central university, Savitribai Phule Pune University, advertised for 5 posts of teachers for three posts in English and two in commerce department on July 27, 2020.

All posts are marked "contractual", for a period of 8 to 9 months (contract would be valid up to May 31, 2021, and the last date for filing applications is August 18, 2020), with a "consolidated" pay of Rs 30,000 per month. There is no mention of whether it is renewable, what career prospects it offers, or is there a chance of being made permanent. Nor any mention of social security.

Qualifications: the candidates must tick all the UGC norms for appointment as Assistant Professors: NET/SET/Ph.D. etc.

The advertisement for the commerce Department is reproduced for reference. 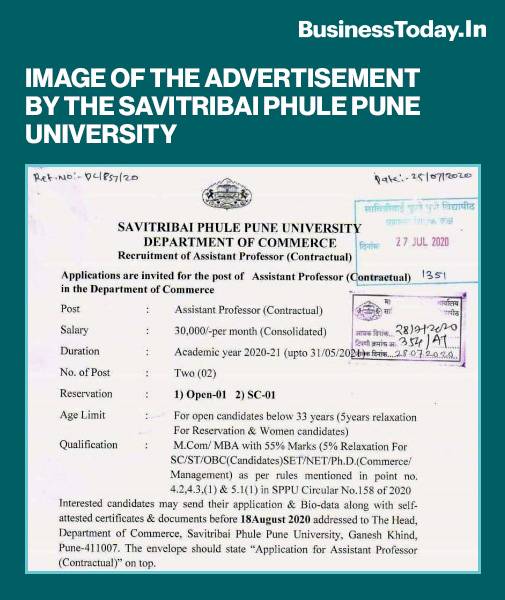 This university was ranked 9th in the MHRD's 2020 list of universities, two places ahead of DU.

State of teachers of higher learning in India

There is no reliable or complete information on the service condition of teachers in Indian colleges and universities.

The DUTA president Ray says in 20-odd central universities, which are part of a federation of teachers' associations and which he heads too, there would probably be 20 to 50 teachers out of 200-800 of total faculty who would be having one-year contracts (6-10% of the total).

The HRD ministry's All India Survey on Higher Education provides some information but excludes private and deemed universities from its ambit, and hence grossly incomplete. It excludes private institutions because they are not required to provide relevant details to its database (www.aishe.gov.in) in the first place. This database provides the basis for the MHRD's ranking.

Private universities have been growing and have a big presence. They numbered 385 in 2018-19, out of 993 universities listed in the MHRD database, accounting for 39% of the total Indian universities.

The MHRD's last survey of 2018-19, released in August 2019, showed an average of 6.8% faculty members in universities and colleges marked as "temporary" during the period of FY13-FY19.

The document did not define "temporary". It defined "teaching staff" which had a host of positions that can be assumed to be without job and social security: part-time, ad hoc, temporary, contract, and visiting teachers. "Temporary" teachers are a part of this universe.

To conclude, here is a question to ponder over: Does or can such a society or a country aspire to or even deserve quality education?