Instead of promoting a new social microfinance institution, the government should build on the existing and vibrant microfinance sector to cater to its envisioned need It was an appreciative thought when he said that the handloom, handicrafts, khadi, and agro-based industries should be encouraged, especially across 115 aspirational districts.

The government is working hard to resurrect the economy, however, it also needs to consider the existing microfinance sector and related institutions to expedite its initiatives.

Microfinance has always been a social enterprise having a conspicuous and inconspicuous impact on the life of poor people. In May 2020, as reported by M2i and industry's association, almost all MFIs (microfinance institutions) have provided moratoriums to borrowers when their own portfolio was almost not covered by lenders; only 20 per cent of the MFIs received the funding after March 20. It shows the social commitment of the MFIs.

Such organisations (MFIs) currently reach out to 34 states/UTs and 570 districts, including aspirational districts.

Instead of creating a new establishment such as a social microfinance institution to help people to run small shops and businesses, it would be good if the government considers building on the already established microfinance sector to cater to its envisioned need.

It's a two and half decade old sector with around 30 per cent year-on-year growth. The MFI sector started with a not-for-profit legal format but there was a discord between demand and supply, where demand for loans by the poor was humongous and investors were comfortable investing in regulated entities.

According to the report by IFC-Intellecap (2019), the financial demand of small businesses stands at Rs 16.66 lakh crore. This may be a potentially rewarding market, however, the major constraints faced by the MSMEs are unstandardised systems and processes, which hinder their access to formal finance in a significant way; MFIs may be in a position to access this market, given their systems are better geared to assess and take credit calls on these enterprises as compared to traditional financial institutions.

Although, as per the RBI's guidelines, MFIs are entitled to extend up to 50 per cent of the portfolio for consumption purposes, most of which support livelihood generation where enterprise promotion is significant. As per Bharat Microfinance Report 2019, the proportion of income-generating loans to non-income generating loans was 89:11( FY 2018-19), and around 41 per cent of the income-generating portfolio has been extended to enterprise promotion.

In December 2019, the portfolio of MFIs was Rs 2.07 lakh crore (86,411crore including banks and SFBs), catering to 483 lakh accounts (983 lakhs with banks and SFBs) with PAR (portfolio at risk) of 0.65 per cent. It denotes that the microfinance industry is ready with the processes and basic manpower to handle the newer challenges. Only structural changes will make them efficient channels to extend credits to the bigger entrepreneurs.

Although the threshold for microenterprises has been escalated through a revised classification by the Ministry of Micro Small and Medium Enterprises (MSME), whereby investment in plant and machinery or equipment is up to Rs 1 crore and annual turnover is no more than Rs 5 crore.

In this case, qualifying asset norms, which are at least 85 per cent of an NBFC-MFI's total net assets, is a restrictive factor for the sector (NBFC/NBFCMFIs). The directive is that if the borrower to be catered to is a rural household, then its annual income should not be more than Rs 1,25,000 or urban and that of a semi-urban household should not exceed Rs 2,00,000; the loan disbursed by an NBFC-MFI should not be more than Rs 75,000 in the first cycle and Rs 1,25,000 in subsequent cycles.

As per experience, the financial requirement to run small shops and businesses is around the stipulated threshold only. But, if needed, additional funds can always be sourced from the banks as well. Nonetheless, the remaining 15 per cent of the portfolio are non-qualifying assets, which microfinance institutions use to lend outside the guidelines governing MFI lending.

To bring this to cognizance, there are systematically important NBFCs, MFIs that can be roped in to take the initiative forward. These institutions have to have an asset size of Rs 500 crore or more in the last audited balance sheet.

As per the Bharat Microfinance Report 2019, there are 31 systematically important NBFC-MFIs, and there is every possibility that the number of such institutions would have increased this year if the COVID-19 pandemic had not impacted the (microfinance) sector and economy alike. 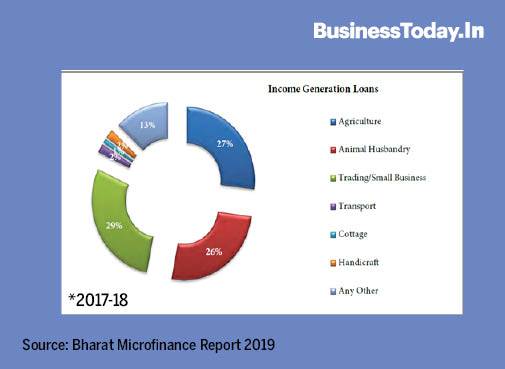 In order to cater to bigger portfolios, the capacity of these MFIs can be enhanced in the area of assessment and structuring of financing the small shops and businesses, which are above the stipulated loan limits by the RBI for NBFCs.

The government can also extend a special portfolio for the NBFC-MFIs, which will be out of the purview of qualifying/non-qualifying assets. These MFIs can be entrusted with the mobilisation of savings, which can be parked into banks; on the basis of such savings, the banks can lend the MFIs. Another way of doing this is through small finance banks, which are already mobilising savings and catering to the microenterprises.

As the Indian financial markets are among the most regulated, entailing humongous work pressure on the RBI, a new category of institution/s will definitely increase the burden on the regulator. As per the MFI Directory of 2018, around 55 per cent of the MFIs are not-for-profit entities, comprising societies, trusts, u/s 8 companies, and cooperatives. RBI seems reluctant to regulate these entities directly, as it will put a burden on them.

Post-COVID-19 insurgence, the government has tried to support the sector through different financial packages, e.g. TLTRO, special funds for DFIs, NABARD's recent guarantee product, etc. But the real boost emanates from the newer and escalated portfolios.

The microfinance sector has experience of more than two decades and has proved its sustainability over time as well. MFIs, especially NBFC-MFIs, are regulated and have experience of working under compliance.

The systematically important NBFC-MFIs have the experience of dealing with bigger portfolios and their human resources are also trained to a certain extent. Above all being unsecured in nature, the repayment is almost 100 per cent.

The government needs to take serious cognizance of these facts and instead of promoting another channel to serve the microenterprise portfolio and bring additional workload for the RBI, it can work with the microfinance sector and augment the cause.

(The author is Associate Director of Sa-Dhan. All views are personal)