India has learnt that growth in GDP does not automatically translate into growth in jobs and that GDP growth does not necessarily mean well-being of a vast majority of population. It needs to put these experiences into work and frame appropriate policy responses to the job crisis

It is time India learnt its lessons and focus on creating jobs to ensure the well-being of vast majority of its population, rather than a selected few
Prasanna Mohanty

India is probably the only major economy with no accurate data on the size of its workforce or how many lost their jobs to the pandemic-induced lockdown. It did not try to save jobs lost to the lockdown, other than issuing a perfunctory circular on March 29 asking private enterprises to pay wages during the lockdown, which was later withdrawn (on May 17) when challenged in the Supreme Court.

In contrast, the OECD countries saved 50 million jobs through "Job Retention (JR) schemes" by May 2020, as per the OECD's report "Job retention schemes during the COVID-19 lockdown and beyond" released in August 2020. (To know how they did it, read "Rebooting Economy XXIII: What stops India from taking care of its crisis-hit workers? ")

India is also one of the rare countries with no National Employment Policy (NEP) even after years of job-less growth (during the UPA era) and job-loss growth (during the NDA-II era). In the past 15 years (FY06-FY20), the GDP has grown at an annual average of 6.75% (2011-12 base, constant prices).

India is also one of the rare countries with no National Employment Policy (NEP) despite a prolonged job crisis. The PLFS of 2017-18, released in May 2019, had shown that the unemployment rate had touched a 45-year high of 6.1%.

Yet the government did not acknowledge it or frame a policy or fiscal response to it. The unemployment rate did improve to 5.8% during PLFS of 2018-19, but the pandemic has wiped out much more than that gain.

During the job-less era of the UPA, the Union Labour and Employment Ministry started preparing a national policy response. A decade or so later, there is no sign of it.

There is no explanation other than official apathy. The labour ministry has been non-responsive. Responsibilities for welfare of different categories of workers are also scattered across ministries of finance, rural development, MSMEs, agriculture, tribal affairs, social justice and empowerment etc. After the national lockdown, the Ministry of Home Affairs (MHA) has become the nodal authority to approve changes in labour laws by state governments, in place of the labour ministry.

Working in a data vacuum

India has very little data on its informal workers, estimated to constitute 94% of its workforce, as per the official records of the labour ministry. The ministry, however, does not disclose the basis of such estimation or the year for which it was done by which agency.

Even in the organised sector, India's datasets are unreliable. For example, the central government told a Parliamentary panel examining the Code on Social Security a few months ago (report was released in July 2020) that about 34.9 million workers had been insured under the ESI Act of 1948 (72 years in operation) while those qualifying for it were estimated at 100 million. The basis of this assertion (100 million) is not known either.

The three labour codes passed in September 2020 provide for registration of different categories of workers (like migrants) and business establishments but without fixing responsibility for any particular authority. These codes talk of registrations "as may be prescribed" by appropriate authority.

Officially, the labour ministry is responsible for maintaining labour statistics, but it hasn't done so in more than 70 years. There is no reason to believe that labour statistics will be available any time soon.

The same goes for wages. No coherent or complete dataset is available with any government agency. In the meanwhile, dramatic changes in wage rates have been noticed which are difficult to decipher.

Wage trends are not fully understood

One graph shows 'real' wages in urban areas are declining sharply since FY12 while that of rural wages are rising (though at a slower rate than earlier). 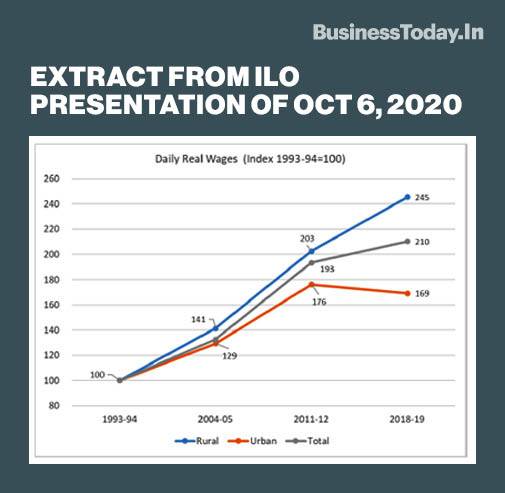 The other graph shows 'real' wages of regular workers are on a sharp decline since FY12, while that of casual workers are going up (although at a slower rate than earlier). 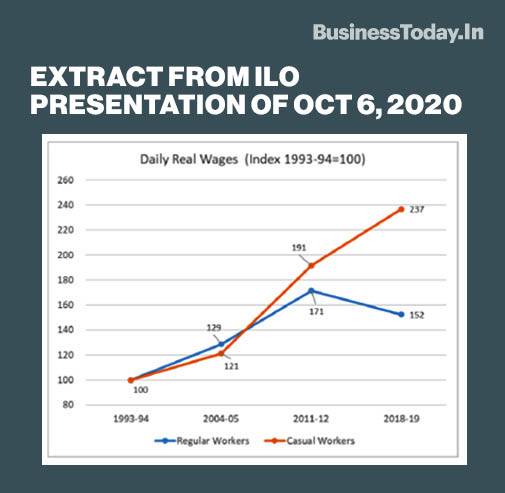 He used the official PLFS and Employment-Unemployment Survey (EUS) data of India to map the trends.

What is better understood is that rural wages have gone up in the past few years for several reasons, including the rural job guarantee scheme MGNREGS, higher MSP, spurt in construction activities and gradual withdrawal of women from the workforce (not necessarily in that order), as the then RBI Governor Raghuram Rajan had explained in 2015.

Why regular wages have stagnated or even fallen is also known. Several studies have shown that growth of contract work and weakened trade unions have worked to the advantage of employers in keeping wages low. (For more read "Rebooting Economy 34: Temporary jobs hurt both workers and economy")

Further, the ILO's 2018 India Wage Report pointed out that workers are being denied their share in the growth of labour productivity. Growing unemployment and job loss (pre-pandemic period) have contributed their share. But what exactly are the reasons for causal wages to go up amidst all these developments? That is not yet understood.

Even what is understood needs to be regularly reassessed given the dynamic nature of labour market and cataclysmic events such as the current crisis. What seemed clear five or 10 years ago may not be true now.

What about jobs for urban workers?

India's response to job crisis has been restricted to the rural job guarantee scheme MGNREGS since 2006 when it was rolled out. Following the lockdown, an additional allocation of Rs 40,000 crore was made for it. What about urban workers? There is no such help for them.

It needs reminding that the MGNREGS was an emergency response to rural distress. By the very design of it (mainly manual earth work), it is Keynesian and is a temporary relief. If it has turned into a permanent job creation mechanism that is because the rural distress has not been addressed through appropriate policies and strategies.

Even this fig leaf is not available to urban workers who too have been facing the job crisis. The pandemic aggravated it further. A study by the London School of Economics, published in September 2020, said: "Unlike many developed and some developing economies, 52 per cent of urban workers (in India) went without work or pay and received no financial assistance to tide over the crisis."

The study used a new field survey of low-wage areas of urban India to show that employment and earnings were decimated by the lockdown resulting from the pandemic.

In response to their distress, development economist Jean Dreze has proposed a scheme of subsidised public employment in urban areas, to be generated by multiple public institutions on their own initiative and is named "Decentralised Urban Employment and Training (DUET)". Dreze was part of the team that conceptualised and drafted the MGNREGS.

Dreze's prescription has sparked an interesting debate among economists and other experts who are actively engaged with figuring out the challenges and how to overcome those since the nature of rural and urban works are vastly different. Urban works don't provide a wider canvas and population base that rural works do.

An urban job guarantee scheme may not necessarily be the right answer but there is little to argue against a well thought out national policy to generate employment. All of India's economic policies are focussed on increasing industrial growth (particularly manufacturing) and that of the GDP. Manufacturing has disappointed for decades despite generous help in the form of fiscal incentives, natural resources and much more. High GDP growth has happened without creating jobs, not to talk of well-paid and secure jobs.

High GDP growth has generated even higher inequality in wealth and income. It is time India learnt its lessons and focus on creating jobs to ensure the well-being of vast majority of its population, rather than a selected few.