Rebooting Economy VI: Is Modi govt ignoring job crisis in India or unable to tackle it?

For years, job crisis has remained unacknowledged and un-remedied; the COVID-19 pandemic worsened it, but the government has no information on job loss or policy response to it, except for a few relief measures

By its very definition, the unorganised sector and workers have little legal protection, jobs or social security in India

The Centre's nodal ministry for labour and employment has been missing in action during the biggest job and income crises of our time.

How many workers lost jobs and incomes due to the lockdown? How many have been rehired since the unlocking began on June 1? How many migrants went home and how many have returned? How many of those who lost their jobs received government assistance?

These are basic questions to which no answers are available because the government is not tracking these developments.

There is official confirmation on this.

On June 1, the day the unlocking began, Minister for MSMEs and Road Transport Nitin Gadkari said there had "not been any official analysis" of job loss, grudgingly admitting that the lockdown "definitely impacted it (jobs)" when the evidence was all around, staring at the face.

For the labour ministry, this is an encore. It was missing in action during the job crisis of pre-pandemic years too. One can be forgiven for not knowing the name of the union labour minister.

This is contrary to the mandate though.

The ministry, on its website, claims that its "main responsibility" is "to protect and safeguard the interests of workers" and that it is "focused on promotion of welfare and providing social security to the labour force both in organised and unorganised sectors".

A simple tracking of its activities through the statements it has issued would show why.

The ministry's website lists 20 press statements in all, issued between April 18 and July 8, 2020.

Of these, 12 relate to provident fund (PF) related matters.

Not one mentions the state of employment or job loss or income loss of workers. There is no information about mass reverse migration except for a passing mention that it is collecting and passing on information to states for assistance. A statement says Rs 4,957 crore has been paid to construction workers (Rs 1,000-Rs 6,000 to each) from their welfare fund. This is just 9.5% of Rs 52,000 crore lying unutilised in the welfare fund.

Why is there so much focus on EPF?

It is because that constitutes a pivot of the government's response.

There are three moves relating to PF.

First, on March 29 the Employees' Provident Fund (EPF) Scheme of 1952 was amended "to allow withdrawal of non-refundable advance by EPF members/subscribers...up to the amount of basic wages and dearness allowance for three months or up to 75% of the amount standing to member's credit in the EPF account..."

Second, PF contribution for employers and employees reduced from 12% to 10% until August.

How allowing organised sector workers (6% of total workforce) to withdraw from their own contingency post-retirement fund constitutes a state assistance defies logic. Or, for that matter, a temporary reduction of 2% in contribution to PF fund?

Third, the PF support to establishments having up to 100 workers and 90% of them claiming less than Rs 15,000 a month is extended (announced in March) to August. This is to protect jobs during the COVID-19 pandemic. Is it working? There is no evidence either way or how much money the government has paid to save jobs.

These measures are for the organised sector. What about the unorganised workers constituting 94% of the total workforce and the hardest hit by the COVID-19 pandemic?

A few measures have been announced for those, including the migrants who went back home.

One is an additional credit facility for the MSMEs providing second-most jobs at 111 million after agriculture. But there are no takers.

There wouldn't be any takers for such credit until economic uncertainty continues as the world has repeatedly learnt since the 1929 Great Depression. Businesses don't need to take credit or invest in capacity building when demand is weak and industrial production has crashed. Liquidity measures are a waste and the RBI knows it. (For more read, 'Coronavirus Lockdown XIX: Where is excess liquidity generated by RBI going ?')

The uncertainties would continue for some more time with several states (Maharashtra, Tamil Nadu, West Bengal) and cities (Bangalore, Chennai, Guwahati, Hyderabad) continuing complete shutdown a month-and-half after the "unlocking" began on June 1.

Then there is the Garib Kalyan Rozgar Yojna, announced in late June, which is an amalgamation of 25 existing schemes with no additional allocation. It would provide jobs to migrants who went back home in 116 districts in six states. But that means the existing local jobless and job seekers in these areas would be short-changed and hence, it is a zero-sum game.

Then there is the additional allocation of Rs 40,000 crore for the rural job guarantee scheme Mahatma Gandhi National Rural Employment Guarantee Scheme (MGNREGS), long condemned as a "living monument of UPA's failures", inadequate to meet existing work demand for several years and the average days of work for households remains less than 50 days (average of five previous fiscals is 48 days).

These are not part of a job creation policy or strategy to address structural deficiencies that caused a job crisis in the pre-pandemic era in the first place.

What about the job crisis in urban areas? Nothing has been heard.

To cut to the chase, the government is working on a complete information and policy vacuum.

India's job crisis is not new but the NDA-II regime has refused to acknowledge it or take remedial measures even though it promised one crore jobs every year.

In January 2019, the government stopped the release of the Periodic Labour Force Survey (PLFS) of 2017-18 report for showing the unemployment rate (UR) at a 45-year-high of 6.1%. It was released post-2019 election win but the three subsequent budgets (one interim) and two Economic Surveys were silent.

Amidst the current job crisis, the government released the PLFS of 2018-19 in June stating that the Unemployment Ratio (UR) had fallen to 5.8%, even though it is statistically insignificant (The error margins (RSE) in UR for both reports is 1.8-2%) and irrelevant to the current crisis.

The pandemic has worsened the job crisis.

Riding on precarious 94% of workers in unorganised sector

Indian economy is riding on one of the most enfeebled and vulnerable workforces in the world.

The labour ministry's website says, 43.7 crore of a total workforce of 46.5 crore is in the "unorganised sector". This works out to be 94% of the total workforce.

Besides, there are a large number of "informal" employments in the organised sector (no legal and social security protections), such as short-term contracts (quarterly contracts, for example), causal and retainers. That should take the number of precarious workers (called 'precariat') to a higher level.

In January 2020, the government declared it would hold a survey to count their numbers for providing them social security. But, the COVID-19 pandemic has postponed it indefinitely.

Internationally, similar enterprises and workers are called "informal". Informal enterprises are not covered by law or insufficiently covered by formal arrangements. Informal employments are de facto or de jure not subject to labour laws or entitled to social protection and benefits like advance notice of dismissal, severance pay, paid annual or sick leave, etc.

Though not the same, India uses both "informal" and "unorganised" alternately for some decades now. For example, without an official definition for "informal", the Economic Survey of 2018-19 said "almost 93%" of the total workforce is "informal", without even disclosing its source of information.

Globally, India stands at the top when it comes to "informal" workers.

An OECD-ILO study of May 2019 says India's informal workers constitute 88.2% of the total workforce. India is clubbed with some of the least developed economies like Sub-Saharan Africa, Bangladesh, Nepal, Cambodia etc.

Broadly speaking, the report says, informality represents 70% in developing and emerging economies and about 18% in developed countries. 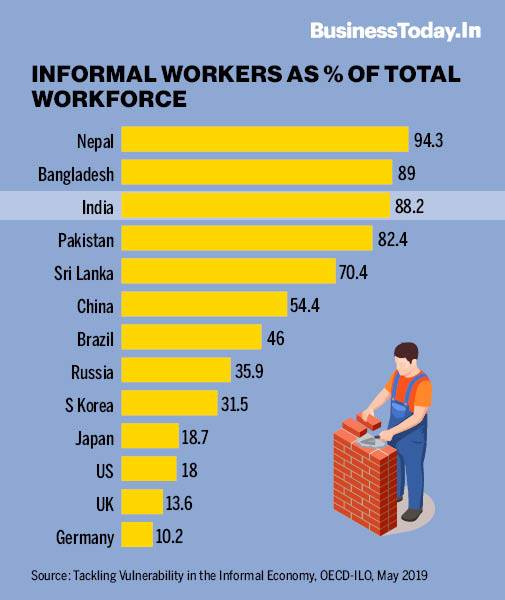 Why informality is a concern?

In India, the Economic Survey of 2015-16 found that wages in the organised/formal sector are over 20 times higher, on average.

The Indian economy is riding on 88.2-94% of such low-skilled, lowly paid with little job or social security cover. Are they capable of building a robust economy? Or quickly rebuild an economy battered by the lockdown?

No social security for 88.5% of workers; their numbers are growing

How many Indian workers have social security?

No official data exists but an estimate can be made.

Social security benefits mean provident fund (PF), pension, gratuity, healthcare, and maternity benefits singly or in any combination (as per the PLFS report). If the well-off among the self-employed, like doctors, lawyers, chartered accountants, and others, who would have their own private social security arrangements, are added, the total number would go up but by what is not known in absence of data. Assuming an addition of 2%, those without social security will still be 86.5%.

Such a poor social security cover is because of official negligence.

The only law that provides social security to unorganised workers is the Unorganised Workers' Social Security (UWSS) Act of 2008. It is proposed to be subsumed in the Social Security Code of 2019, now pending before a parliamentary committee.

Neither the UWSS Act of 2008 nor the Social Security Code of 2019 is designed to ensure what they claim to do.

Here is how Prof. Ravi Srivastava, an eminent labour economist with long experience in formulating social security measures as a former member of the National Commission for Enterprises in the Unorganised Sector (NCEUS), currently a faculty at the Institute for Human Development, explains their failings.

Regarding the UWSS Act of 2008, Prof. Srivastava says, "It did not provide an adequate legislative framework for universal social security to unorganised workers. It didn't provide a financial framework as social security was to be provided through separate schemes. It provided for registration of unorganised workers, but even that has not been implemented by successive governments."

About the 2019 Social Security Code, he says, "Almost the same provisions have been incorporated in this code. Further, it has taken out informal workers in organised sector, like contract and casual workers, from the purview of organised sector schemes of EPF and ESI. They are now part of unorganised workers without any mandatory social security coverage."

That is because Prof. Srivastava says these laws are so designed to provide for framing various social security schemes, but there is no timeline, nor is it mandatory for those to be universal.

Strong protests from trade unions and labour economists forced the government to send the 2019 Code to a Parliamentary Standing Committee for re-examination.