India being one of the fastest developing nations and leader of the new age global scenario took aggressive steps to curb waste and regulate efficient waste management systems. 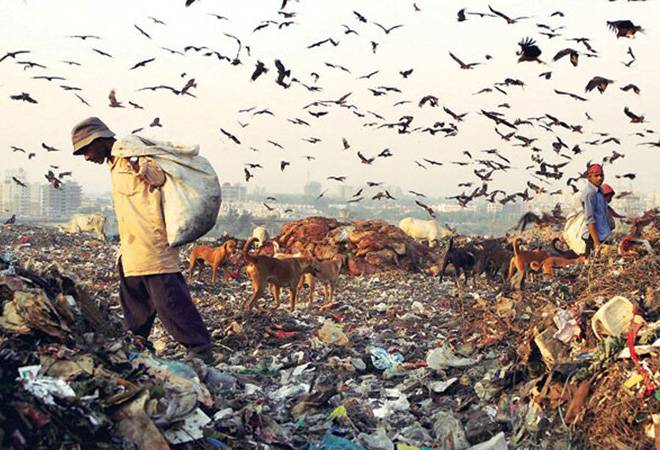 The Global E-waste Monitor 2017 report by UNU has marked India as a major attributor to waste management on account of the e-waste legislation adopted by the nation in 2016.

A document of National Geographic depicted a recent December 2018 report from Britain's Royal Statistical Society highlighting a fact related to plastic waste as 'the Statistics of the year'. The great revelation in the report was that only 9% of the plastic ever made has been recycled.

This unfolds the fact that 91% of the plastic produced is 'non-recycled' or 'unprocessed' and continually deteriorating the global ecosystem. Another Global E-waste Monitor Report 2017 from the United Nations University revealed that only 20% of the 44.7 million metric tonnes of e-waste generated in 2016 was collected and recycled.

The facts together give rise to an apocalyptic threat imposed on the earth. Can burgeoning waste around the world be taking us towards the END? The exact same question compelled economies to step ahead and handle the issue of waste on priority.

India being one of the fastest developing nations and leader of the new age global scenario took aggressive steps to curb waste and regulate efficient waste management systems. Right from prime minister's 'Swachh Bharat' mission to Plastic Waste Management rules in 2016 (PWM 2016), E-Waste (Management) Rules, 2016 and the Hazardous and Other Wastes (Management and Transboundary Movement) Rules, 2016, the government is leaving no stone unturned to mechanize an effective waste management system across the geography. But is it really happening?

A True Story from the Grounds

The Global E-waste Monitor 2017 report by UNU has marked India as a major attributor to waste management on account of the e-waste legislation adopted by the nation in 2016. When most of the other Asian countries are still struggling with the policy frameworks, India has risen as a leader amongst them. However, implementation is equally important as legislation and on this particular front, India is still walking on tightropes.

The municipal level management of waste in tier-II, tier-III cities and metros tell a different tale from what development graph projects. Although the government is trying to curb the use of plastics of thickness less than 50 microns and multi-layered plastics, yet the enormous INR 110,000 Cr plastic industry is continually fueling the production of plastics.

The facts by CPCB and MoEF have showcased nearly 60% recycling of plastic waste, but the practical experience and global statistics paint the opposite picture. The majority of the people working in Indian Waste Management System belong to the informal sector and Landfills are practically their livelihood.

A study from Proceedings of the National Academy of Sciences (PNAS) stated that Mumbai is the fifth largest producer of waste with a whopping 11,000 tonnes of waste generated every day. The finance capital of the country was even marked as a city 'being buried under a mountain of its own trash'. Nevertheless, the widespread criticism forced the administration to fasten the belts and Mumbai put a complete effective ban on single-use plastics in June 2018.

This is just one example of waste management in the world's second most populous country which aspires to be among the first ones to attain the SDGs (Sustainable Development Goals) mentioned in 'Agenda: 2030' of the UN.

The Progress and Prospectus of Indian Waste Management System

2018 ended with high aspirations of the Indian Environment Minister's resolution - 'to eliminate all single-use plastics from our beautiful country by 2022'. It may sound promising but one must be critical to evaluate all the aspects of progress made by India and the prospected efficiency of existing legislatures and policy frameworks.

The combined efforts of CPCB (Central Pollution Control Board) and NGT (National Green Tribunal) have resulted in the emergence of several legislatures which can effectively control the waste issues in India. A bird's eye view on India's history can tell that the nation has gained a stronghold on several fronts in the last 5 years, especially in curbing E-waste and plastics.

The report titled 'What a Waste 2.0' by the World Bank explored a trajectory where waste generation will overtake population growth by 2050, but also sheds light on the ways economies are tackling the issue. The noteworthy mentions in the report highlight efforts of waste collection by partnering with informal sector in Pune and sustainable source separation of waste in Panaji. These examples exemplify the seriousness of the government regarding the issue and also accounts for the increase in public awareness.

In fact, the emergence of private players in the waste management sector also symbolizes the dawn of a new era, where the informal sector will effectively turn mainstream and re-organize to create efficient and safe waste management system. From the utilitarian perspective, the inclusion of informal sector workers will not just give them a better life but will also serve as the most effective tool to mitigate the rising waste issues.

Although infrastructure development and deployment of technology are going to take several more years yet the grassroots strengthening of major stakeholders including waste generator, waste collection agent and the final contractor will pave the path for a better future.

However, this will be a burning question for India that - Is it really succeeding in controlling the waste?

The story of two cities and two cyclones