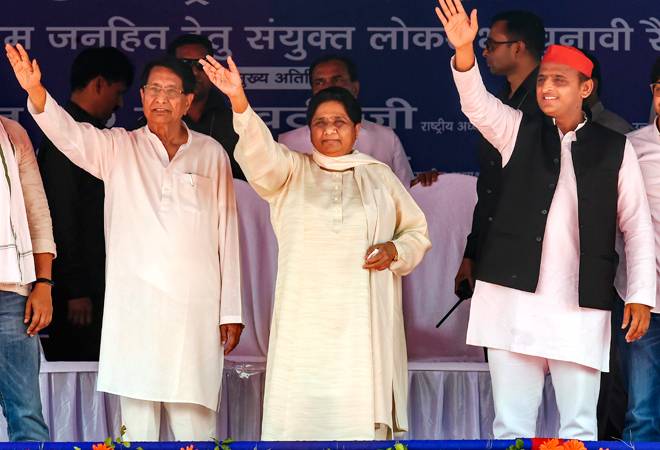 A recalculation of votes that political parties bagged in 2014 Lok Sabha elections shows the new Gathbandhan -- Samajwadi Party (SP), Bahujan Samajwadi Party (BSP) and Rashtriya Lok Dal (RLD) -- has the vote base to reduce BJP-Apna Dal (AD) combination to 36 seats in Uttar Pradesh (UP) from 73 it won in the last election. The regional parties can sweep up to 72 seats if they capture low margin seats won by BJP. However, they need the support of Congress for this sweep.

The new combination can win 42 out of 80 seats in UP if they effectively transfer their votes for the Gathbandhan candidate. Congress can retain its two constituencies, Amethi and Rae Bareli. The interesting fact is that bringing Congress to the fold of SP-BSP-RLD itself will increase their tally of seats to 57, according to the new calculation. The SP and BSP have already announced that there will not be any tie-up with Congress except in Amethi and Rae Barel, where Gandhis are contesting. However, sources suggest that there will be some understanding at the constituencies. 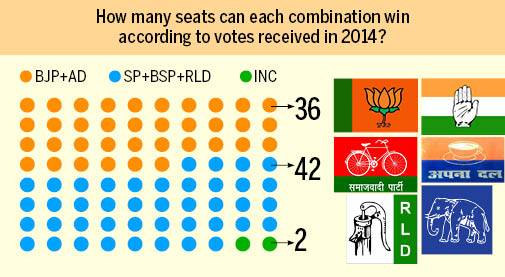 The SP and BSP together got 3.46 crore votes in 2014, while BJP-AD was slightly ahead at 3.51 crore votes. The Gathbandhan's votes increased to 3.82 crore during the UP assembly election in 2017 (SP and BSP contested separately), while those of BJP-AD slightly reduced to 3.44 crore. BJP's number of votes rose sharply in the last assembly and Lok Sabha elections (from around 1 crore earlier to 3.4 crore). However, the votes of SP and BSP have not reduced at all. It indicates that both the regional parties will be able to transfer their loyal votes to the Gathbandhan candidate. Despite the calculation of votes, the influence of candidates in the constituency also matters in national election. While PM Narendra Modi and UP CM Yogi Adityanth spearhead the BJP campaign, Akhilesh Yadav and Mayawati are doing joint rallies in the state. Congress' campaign is led by Rahul and Priyanka Gandhi in the country's largest state by number of Lok Sabha constituencies.