Times have changed. You have stringent regulations around which companies can float such FDs, but remember that company FDs are unsecured. In case a company goes insolvent, depositors will be the last ones to get paid. That said, invest with companies with good profitability and rating

At a time when interest rates in the economy are at historic lows, hunting for extra yields is in everyone's mind. This drives many people to company fixed deposits (FDs) because bank FDs are not offering good returns. State Bank of India is giving 5.30 per cent interest rate on three to five years FDs. Alternatively, most high-rated company FDs are offering more than 6 per cent interest rate. But returns should not be the only criteria to take an exposure in it.

"One needs to go for AAA-rated company FDs launched by NBFCs and Housing Finance Companies. The balance sheets of top-rated NBFCs and HFCs are fine. They have good management. For example, one may consider FDs from HDFC, Bajaj Finance and Mahindra Finance. Earlier company FDs lacked rules and regulations, but now at least AAA-rated FDs are safe and interest rates are much better than what PSU banks are offering," says Rajan Pathak, Co-founder - Fintso, an AI-based wealth-tech platform. 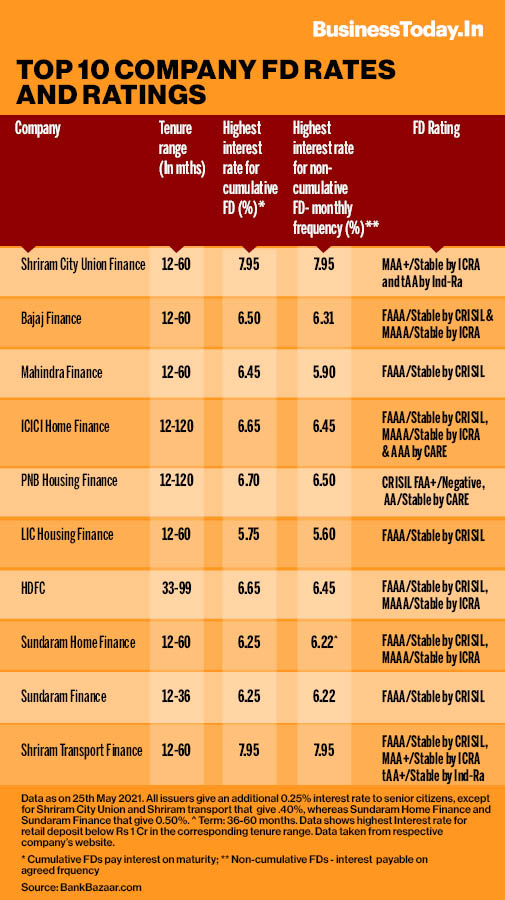 No substitute to good research

Investors get lured with higher interest rates when they have to park some funds. Most of them don't care about what risks the higher interest rates entail. "Year 1995-2000 was a boom period for corporate FDs. Companies were offering 18-21 per cent interest rates. Local distributors were pitched to get investors on board. But nobody did thorough research. If you are raising money at 18-21 per cent, then you need to deploy it at 28-30 per cent. Who will come to you for loan at such a higher rate? The boom busted. Companies could not pay back the principal let alone the interest. A lot of people lost money," says Pathak.

Times have changed. You have stringent regulations around which companies can float such FDs, but remember that company FDs are unsecured. In case a company goes insolvent, depositors will be the last ones to get paid. That said, invest with companies with good profitability and rating.

"Even ratings cannot be trusted. DHFL is the classic example. It was a AAA-rated company FD and yet it failed," says Mrin Agarwal, founder, Finsafe India.

Companies such as Helios and Matheson Information Technology, Jaypee Infratech, Jaiprakash Associates, Valecha Engineering, Ansal Properties, Elder Pharmaceuticals, Zenith Birla and Unitech, among others, have defaulted in the past.

"Credit Rating is one parameter than gives you an idea of the probability of default. Regardless, keep in mind that even a highly rated corporate FD only reflects relative safety but cannot assure it. I recommend investors spend a little time in understanding the company's management and business model before investing. Keep an eye out for negative financial news about the company. After all, in a corporate FD, you are actually lending money to the corporate. So, keep track of its financial well-being," says Adhil Shetty, CEO, Bankbazaar.com.

There is no substitute to thorough research. Invest only if you see profitability in the company. If you see NPAs rising after investment, you can withdraw your money prematurely. But it attracts a small penalty. Typically, if you withdraw before six months, you'll not be paid any interest and withdrawals after 6 months attract 1 per cent interest penalty.

"I am not in favour of company FD. Go for it only if you want a regular fixed return, and are sure about the company. For example- HDFC Ltd is fine," says Agarwal.

She advises considering high-yield FDs from private banks, small finance banks or cooperative banks compared to company FDs because the deposits under former are insured up to Rs 5 lakh by Deposit Insurance and Credit Guarantee Corporation (DICGC), a wholly-owned subsidiary of the Reserve Bank of India. Moreover, an amendment to the DICGC Act, 1961 is likely that will ensure an easy and time-bound access to the deposit insurance in case a bank fails to meet payment obligations. As per the current rules, the deposit insurance can be invoked only after the licence of a bank is cancelled and liquidation process is started.

Company FDs being unsecured in nature do not offer guaranty even on the principal. Invest in them with the help of an advisor who can help you track the financials of the company.