Workers to get 50% wage after 30 days of unemployment; rules eased for ESIC members

The period of coverage which was earlier available from March 24 till June 30, 2020 has also been extended by a year to June 2021

To provide relief to workers affected by COVID-19 pandemic, government has announced major relaxation in the Atal Bimit Vyakti Kalyan Yojna. As against 25% average wage which was earlier payable under the scheme for a maximum period of 90 days of unemployment, the scheme will now pay 50% of the average wage.

The decision was taken in the meeting of Employees' State Insurance Corporation (ESIC) held on 20 August which was chaired by Santosh Kumar Gangwar, Minister of State for Labour and Employment (I/C).

Earlier the minimum waiting period to make the claim was 90 days, which has now been reduced to 30 days after unemployment. It means workers can now claim 50% of one month's wage immediately after 30 days of unemployment. 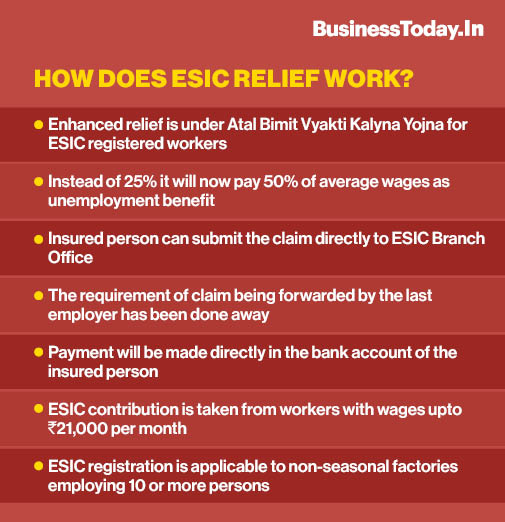 Going forward if they continue to remain unemployed, they will be able to make two more claims.

As against earlier requirement for claim being forwarded by the last employer, the insured person can now submit the claim directly to ESIC Branch Office.

The payment will be made directly in the bank account of the eligible person. 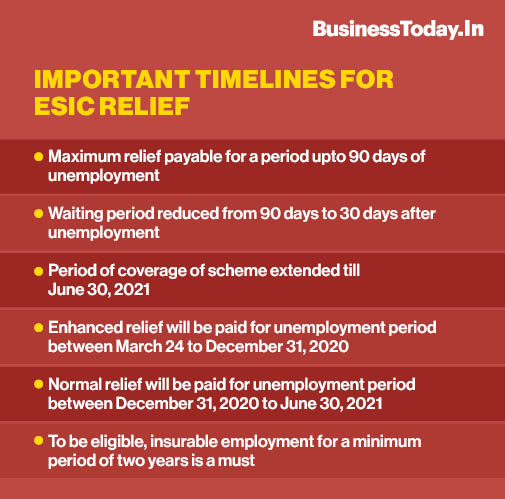 The period of coverage which was earlier available from March 24 till June 30, 2020 has also been extended by a year to June 2021.

"The enhanced relief under the relaxed conditions will be payable during the period of 24.03.2020 to 31st December 2020. Thereafter the scheme will be available with original eligibility condition during the period 01.01.2021 to 30.06.2021. Review of these conditions will be done after 31.12.2020 depending upon the need and demand for such relaxed condition," says the press release from the Ministry of Labour & Employment.

More than 2 crore employees are covered under ESIC as of June 2020. The peak in number of contribution paying employees in last few years was registered in September 2018 when the monthly number rose to 2.95 crore.

As of February 2020, the total number of employees covered under scheme who were paying their contribution to ESIC was 2.80 crore. By June 2020, this number fell to 2.02 crore.

This largely reflects the people who were out of job, barring few who got employment.

To be eligible under the scheme the insured person should meet essential conditions. The person should have been in insurable employment for a minimum period of two years before getting unemployed.

Another condition is contribution for not less than 78 days before the unemployment.

Under Section 2(12), the Employees State Insurance Act, 1948 is applicable to non-seasonal factories employing 10 or more persons. The current wage limit for coverage under the Act is Rs 21,000 per month which is effective from January 1, 2017. In case of disability a higher wage limit of Rs 25,000 per month is allowed.

The number of employees getting a new job each month has also witnessed an increase in last three months. June saw higher number of new employees getting registered under the scheme, and paying contribution. The contributors stood at 7.9 lakh as against the recent low of 2.58 lakh in April 2020.