Auto Expo 2020: The concept e-Futuro has been designed and developed in India by in-house engineers at Maruti Suzuki 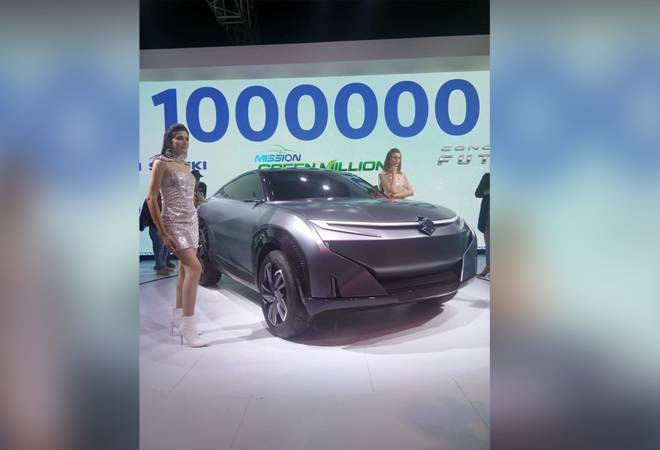 India's largest carmaker Maruti Suzuki India kickstarted the 15th edition of the biennial Auto Expo on Wednesday showcasing the concept Futuro-e electric SUV concept that will be the foundation of its electric car portfolio during the course of the decade.

"We took our first step towards electrification of the powertrain in 2015 with the launch of smart hybrid technology in Ciaz. Today five of our models come with smart hybrid options which are low on emissions and high on fuel economy," said Kenichi Ayukawa, managing director and CEO, MSIL. "Cumulatively we have sold over 1 million green cars-hybrids and CNG, in the last decade. We aim to manufacture and sell the next million green vehicles at a much faster pace over the next couple of years."

The concept e-Futuro has been designed and developed in India by in-house engineers at Maruti Suzuki and follows the larger theme of high raised SUV stance vehicles becoming popular with consumers in the world's fourth-largest automobile market.

A number of manufacturers including Tata Motors, MG Motor and Hyundai have launched electric cars in the last couple of years but Maruti has dragged its feet in this area blaming lack of incentives and infrastructure as impediments in the adoption of EVs in the country.

In the last edition of the auto expo, it had showcased an electric version of its small car, Wagon R, and promised to launch it in the market by 2020.  However, last year it deferred the launch for individual customers. The eWagon R will be launched later this year but it will be focussed on the fleet segment. The government's FAME 2 scheme announced last year also provides incentives for electric cars only for the fleet segment.

"The next million green vehicles that we are talking about today will include a range of technologies and powertrains such as CNG, smart hybrids, strong hybrids and electric vehicles. We are banking on customers to accept and upgrade to new technology including the electrified powertrain," Ayukawa added.

"Though the starting of the decade is a little muted and the industry is under pressure on high acquisition cost and low demand we are confident that this decade will take the industry to the next level and volumes will grow."

Maruti is also showcasing the next generation Vitara Brezza compact SUV and the updated Ignis hatchback at the Expo. The two cars will be launched on Thursday and Friday respectively.