New Hyundai Grand i10 Nios comes with a completely new exterior design; the car is offered in total ten variants -- seven in petrol and three in diesel power trims and will for sometime coexist with the Grand i10 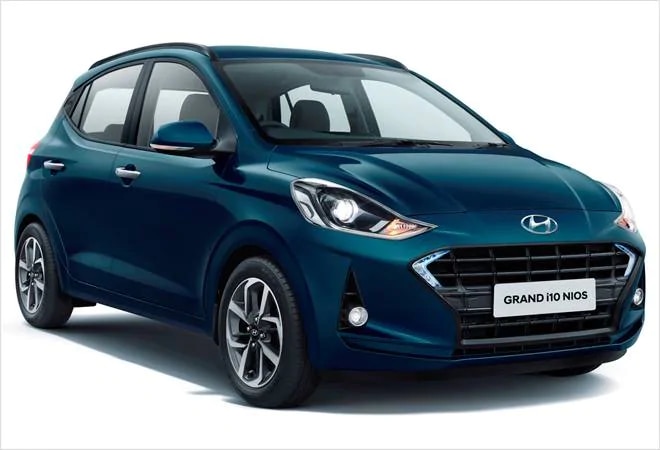 Hyundai Grand i10 Nios has been launched at a time when the domestic passenger vehicle industry is reeling under its worst slowdown ever in India.

India's second largest carmaker Hyundai Motor India Ltd on Tuesday launched the third generation version of its compact hatchback Grand i10 Nios at a starting price of Rs 4.99-7.14 lakh for the petrol and Rs  6.7-7.99 lakh for the diesel variants. The car is offered in total ten variants -- seven in petrol and three in diesel power trims and will for sometime coexist with the Grand i10, which will continue to be offered in the market largely for smaller towns and cities. The latter is likely to be completely phased out when the stricter BS VI emission norms kick in from April 2020.

The new Grand i10 Nios (which means more) comes with a completely new exterior design as also a redesigned interior cabin. It comes with the same 1.2 litre petrol engine that offers a peak power of 83 ps and torque of 11.6 kgm.

Unlike market leader and arch rival Maruti, which has announced plans to discontinue diesel variants of its small cars from April 2020 due to the BS VI emission norms, Hyundai has said it will continue to sell diesel variant of all its cars except Santro. The Nios retains the 1.2 litre diesel engine of the existing Grand i10 that makes a peak power of 75 ps and torque of 19.4 Kgm. While the petrol engine in the car is already BS VI compliant, Hyundai said the diesel engine would.be made compliant in April next year. It has an ARAI rated fuel economy of 20.7 kpl for the petrol manual transmission, 20.5 kol for the petrol automtic manual transmission (AMT), 26.2 kpl for both the manual and AMT transmissions in the diesel version.

The Grand i10 Nios will also come with an upgraded AMT automatic transmission offered with both petrol and diesel versions. The two petrol AMT variants are priced at Rs 6.37 lakh and Rs 6.98 lakh, while the diesel AMT offered in only one variant is priced at Rs 7.85 lakh. The existing version of the car has a 4-speed automatic transmission offered only with the petrol engine.

"The new Grand i10 NIOS is a made in India for the world product. The Indian market is key and axis point of Hyundai's global growth plan," said SS Kim, Managing Director and CEO, Hyundai Motor India Ltd. "The 3rd generation i10 Nios is our third consecutive launch in India of this highly sucessful brand and stands for our commitment to the Indian market," added Kim.

The car has been launched at a time when the domestic passenger vehicle industry is reeling under its worst slowdown ever in India. Sales have declined for nine straight months until July, and in 12 of the last 13 months. The shadows have only darkened this fiscal, with sales falling even more steeply from one month to the next in the last four months. Sales in the domestic market for the industry are down almost 22 per cent in the April-July period of 2019 as compared to the same period in 2018.

The slowdown has not spared Hyundai either. Despite two new launches in the last 12 months -- the Santro in October 2018 and it's maiden compact SUV Venue in May -- the Korean automaker's overall sales in this fiscal declined by 8.35 per cent.

The i10 nameplate was launched by Hyundai back in 2007 and has been a consistent bestseller for the Korean carmaker. Globally around 2.72 million units of the car has been sold since launch. It has also been a regular in the top 10 bestselling list of cars in India over the last decade. It has, however, suffered a steep decline in recent times.

In fiscal 2019, its sales dropped by 15 percent and it was overtaken by its more premium sibling i20 Elite as the best selling Hyundai brand in the country. In this fiscal so far, its sales has taken another beating dropping by nearly 33 percent. Though the decline was partially due to run-off phase of the brand, when a carmaker deliberately sells less cars in anticipation of a facelifted model, Hyundai believes the new version will help it grow its overall sales tally in the rest of the fiscal.

"This is a very challenging time for the market but with the new Grand i10 Nios, we are confident of meeting and exceeding the expectations of our customers," said Kim. "We want to become the brand of choice for Indian customers."