Kia Sonet compact SUV revealed at world premier; to be launched in India next month Just like in the bigger Seltos SUV, the car will be offered in two trims-tech line and a GT line, and will come with a host of engine and transmission options.

South Korean auto major Kia Motor on Friday revealed its compact SUV for India Sonet at a global premiere held virtually. To be manufactured exclusively in India, the sub 4 metre SUV will be launched in the market next month in a fast growing but highly competitive segment. It will compete with the likes of segment leader Maruti Brezza, stablemate Hyundai Venue, Tata Nexon and Mahindra SUV3OO. It will also see increased competition in the next few months with the addition of new models like the Toyota Urban Cruiser-a cross badged product based on the Brezza, Nissan Magnite and Renault's new model based on it and an offering from Czexh carmaker Skoda based on its Vision IN concept vehicle showcased at the Auto Expo earlier this year.

Just like in the bigger Seltos SUV, the car will be offered in two trims-tech line and a GT line, and will come with a host of engine and transmission options. It gets two petrol engines, a 1.2 litre naturally aspirated version and a 1.0 litre turbocharged version with 5 and 6 speed manual transmission. It also gets three different types of automatic transmissions-a 6 speed torque converter automatic, 7 speed dual clutch automatic transmission and a newly introduced 6 speed IMT (intelligent manual transmission). The IMT was launched in the Hyundai venue only last month and offers gearless option at a lower cost and higher fuel economy. 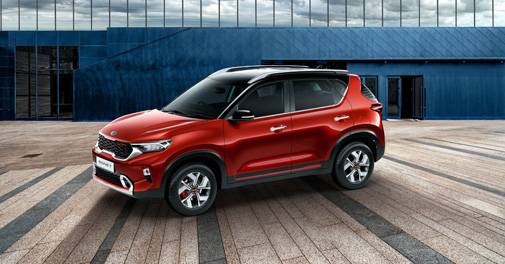 Sonet also gets a 1.5 litre diesel engine that will be offered in both manual and automatic variants. The segment has been split between cars that no longer offer diesel versions and those that do. Market leader Maruti Suzuki discontinued the diesel engine in the Brezza earlier this year, refreshing the model with a new 1.5 litre petrol engine instead as the company feels there will be no significant demand for smaller diesel engines in the stricter BS VI emissions era that kicked in on April 1 this year. Renault Nissan group similarly have also decided to not have any diesel offering in India anymore and their upcoming models will also have only petrol engines. The Hyundai-Kia group has however remained committed to offering diesel powertrains almost across their product range.

"Like the Seltos, we are convinced the Sonet will be another stupendous success," said Ho Sung Song, President and CEO at Kia Motors Corporation. "The Sonet fills a need in the growing SUV market, in India and further afield, and will attract a wider number of consumers to the Kia brand. With this vehicle, we are taking a direct aim at the segment leaders not only in India but across the world."

The craze for compact SUVs - loosely defined as vehicles that like small cars measure no longer than 4 metres but have a higher stance and better road presence - has shown no signs of abating in India. At a time when the domestic automobile industry is in the midst of its worst slowdown in almost half a decade - sales declined by over 17 percent in 2019-20- this segment is an outlier. In the last six years, sale of compact SUVs has grown at an average 84 per cent every year, against just 2.52 per cent for passenger cars in general and 9.6 per cent for overall utility vehicle segment in the country. In 2012/13, the segment accounted for just 16,000 units, but in 2019/20, over 400,000 compact SUVs were sold in the country. "We are extremely excited to introduce the Sonet, which is made in India for the world. After the success of the Seltos and Carnival, we are confident that Kia will revolutionise yet another market segment in India with the Sonet by addressing the unmet needs and aspirations of customers," said Kookhyun Shim, MD and CEO at Kia Motors India. "The Kia Sonet is designed and developed to deliver a best-in-class experience in quality, design, technology, features and drivability to attract a wide spectrum of customers across segments. The Sonet will be produced at our state-of-the-art Anantapur plant to Kia's exacting global standards, and we are sure it will be received with enthusiasm by new customers and existing fans of the brand alike."

Sonet comes with a number of first in segment features such as 10.25-inch AVNT, an automatic variant in diesel, smart key remote engine start (both in AT and MT transmission), front row driver and passenger ventilated seats with an India first smart pure air purifier with virus protection. It also comes loaded with Kia's native suite of UVO connected technology with 57 features including the seamless UVO - Voice Assist. Some of the features are as follows: Sonet is the first SUV in the segment to be offered in the sporty GT Line trim. The GT-Line Trim has been crafted to offer an extra dash of sportiness to the Sonet and to highlight its dynamic presence on the road. The GT Line trim comes with red stitching on the steering wheel, seats and door armrest.  The black high glossy Grille with GT Line logo and red accents on the front, together offer a distinct look to the car. The reat of the GT line encompasses the Piano Black Diffuser Fin Skid Plates with red accents. It also sports a D-cut steering wheel adding to its sporty appeal.