No festive boom! Auto sales to consumer crash 24% in Oct

FADA says only 43 percent of the dealers are feeling good about festive season and only 33 percent of them expect growth in November. Significantly, 30 percent says there may be a decline this month as well. On inventory levels, FADA says average inventory for PVs has shot up to 35-40 days 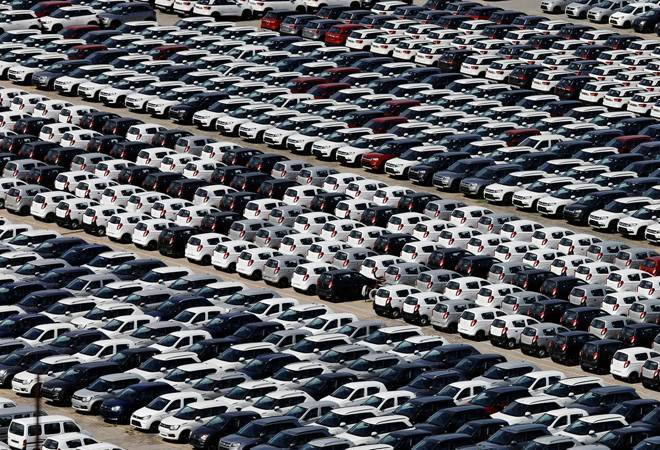 Retail sale of automobiles in October gave a stark reminder of the magnitude of the challenge that confronts the domestic automobile industry as passenger vehicles registered a 9 per cent decline while two-wheelers were down 27 per cent over last year. Across all categories, sale of automobiles at the dealerships was 24 per cent less, figures collated by Federation of Automobile Dealers Associations (FADA) showed. 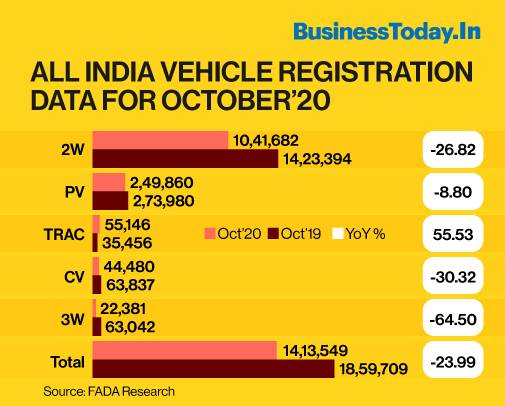 The numbers are in stark contrast to the wholesale figures released by automobile manufacturers for the month of October. Dispatch of passenger vehicles was at an all-time high of over 3.3 lakh units with the two biggest carmakers Maruti and Hyundai witnessing highest ever monthly sales. Retail sales for the month, however, came in at a much lower 249,860 units.

Similarly, in two-wheelers, market leader Hero MotoCorp also saw its highest ever monthly dispatch figures at over 8 lakh units last month but retail numbers for the industry as a whole at 1,041,682 units. The mismatch could also be partly explained by inventory build-up at the showrooms. Manufacturers typically produce more vehicles in the preceding month of Diwali to ensure sufficient stocks at dealerships to cater to increased demand during the festive season. Even then, manufacturers and dealers have offered differing views on expectations from the festive season so far.

Also read: Worried what will happen when festivals are over: Rajiv Bajaj

"October continues to see positive momentum on monthly basis but on a yearly basis the negative slide continues to increase. The nine days Navratri period witnessed robust vehicle registrations but could not save October to go in red as compared to last year when both Navratri and Diwali were in the same month," said Vinkesh Gulati, president, FADA. "While new launches continued to be in demand in passenger vehicle segment, entry level motorcycles witnessed a lean demand in two-wheeler segment. With supply side mismatch, most of the passenger vehicle dealers ended with limited stock of high selling items and odd variants which did not attract much demand. This coupled with lower discounts, compared to last festivals also played a spoilsport."

According to an internal survey conducted among dealers, FADA said only 43 per cent of the dealers are feeling good about the festive season and only 33 per cent of them expect growth in November. Significantly, 30 per cent said there may be a decline this month. On inventory levels, FADA said average inventory for passenger vehicles has shot up to 35-40 days while for two-wheelers it is even higher at 50-55 days.

"As we enter the last leg of festivals and with COVID-19 getting into its third wave in many cities, there is a sense of cautiousness among customers. Due to the lockdown announced in few European countries, procurement of spares will also be a cause of hinderance for smooth supply of vehicles in Indian markets. This will create a supply and demand mismatch, thus affecting the passenger vehicle sales," Gulati said. "We have cautioned both OEMs and dealers to keep a check on vehicle inventory as post festivals, demand may remain subdued. Since inventory levels are at its highest during this financial year, it may impact dealers' financial health thus leading to closures and job losses."