The Meteor follows Enfield's ambitious foray into bigger cruisers with the 650cc Interceptor twins in 2018. This one is primarily aimed at the domestic market where the 350cc segment forms the meat of the demand World's biggest middleweight leisure motorcycle maker Royal Enfield on Friday launched its new 350cc cruiser bike - Meteor at Rs 1.76-1.91 lakh. The Meteor comes at a time when the domestic automobile industry is struggling for growth that has impacted the prospects of the legendary Bullet maker as well.

The Meteor follows Enfield's ambitious foray into bigger cruisers with the 650cc Interceptor twins in 2018. But, while that was targeted more at international markets, this one is primarily aimed at the domestic market where the 350cc segment forms the meat of the demand. It also comes at the right time for the company. After growing relentlessly for much of the last decade, Enfield has found the going tough since 2017-18 when sales first stagnated and then declined in double digits in 2019-20. The impact of the pandemic in this fiscal means it will be a lost year for Enfield like most of the other players in the market. "The Meteor 350 is a supremely refined, easy and accessible cruiser. It is a charming combination of classic cruiser styling with modern capability. We wanted to build a motorcycle that could ensure a great cruising experience for new, as well as experienced riders. The Meteor 350 is just perfect for that," said Siddhartha Lal, Managing Director of Eicher Motors Ltd. "It is easy, very comfortable with excellent ergonomics, and absolutely enjoyable for long distance riding and highway cruising, while being great within the city as well. The motorcycle's poise, its agile handling and up-rated braking, result in an unmatched ride experience. The Meteor also comes with Royal Enfield Tripper, a convenient turn-by-turn navigation pod that connects to the Royal Enfield App. We have invested a lot of time and effort in making the navigation simple and sharply intuitive with native Google Maps integration. In a clear manner it gives the rider all the information needed to make the right decision on the road. It is un-intrusive and does not clutter the rider with too many distractions. It is by far the best two-wheeler navigation support. All-in-all, the Meteor 350 is a well-rounded, super refined motorcycle and we are confident that it will bring the golden age of cruising on Indian roads."

Also read: Harley Davidson's India story is not over yet; here's why

As a successor to the Thunderbird, which accounted for a little over 6 percent of Enfield's domestic sales in 2019-20, the Meteor is available in three variants - Fireball, Stellar and Supernova priced at Rs 1,75,817, Rs 1,81,326 and Rs 1,90,536, respectively. Much anticipated and somewhat delayed, it goes head to head with the Honda Hi'ness, the Japanese bike major's foray into the cruiser segment in India that was launched only last month priced at a similar Rs 1.85-1.9 lakh. Others like TVS and Triumph, which has joined hands with Bajaj Auto, are also likely to enter this segment soon with a likely possibility of Hero MotoCorp also joining in later now that it has a non equity partnership with Harley Davidson. 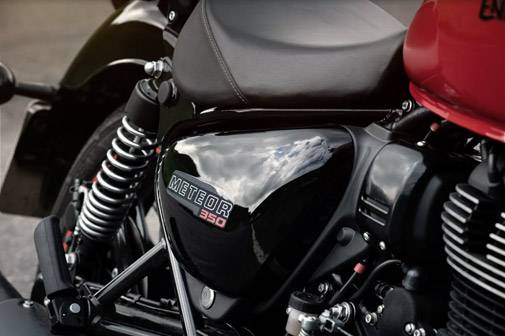 "Competition doesn't bother us. We know what we are doing. We take note of what they are upto it but it does not worry us. On the contrary it is good that others are entering this segment as it would only help in expanding the market for us," said Vinod K Dasari, CEO of Royal Enfield. "With the Meteor 350, we wanted to build not just a fabulous motorcycle, but also create a whole new way for people to engage with the brand and transform their purchase and ownership experience."

The Meteor inherits its name from another iconic Royal Enfield motorcycle of the 1950's that was launched at the end of 1952. Designed and developed by designers and engineers based at Royal Enfield's two technical centres, in Chennai, Tamil Nadu, and Bruntingthorpe, UK, it has a 349cc air-oil cooled single-cylinder engine, that generates 20.2 bhp and 27 Nm of torque at 4000 rpm. It is mated to a 5-speed gearbox, with fifth gear being an overdrive and a 7-plate clutch for easy gear changes in built-up traffic. Also making its debut on the Meteor is the new TBT (Turn-By-Turn) navigation pod, known as the Royal Enfield Tripper, a highly focused navigation display device for real time directions, built with Google Maps Platform. The Tripper displays the best route to reach a destination using Google Maps' two-wheeler navigation, a first for any Indian made motorcycle. Paired via the Royal Enfield App to the rider's smartphone, the Tripper is simplicity itself, clearly and efficiently giving the required level of information whilst remaining  discreet and unintrusive. 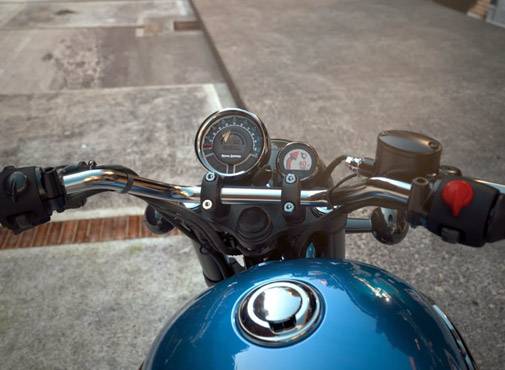 All editions are fitted with alloy wheels and tubeless tyres as standard. For added comfort and an authentic cruiser appearance, a 100/90 - 19 tyre is used on the front and a 140/70 - 17 at the rear. It gets 300mm front and 270mm rear discs and dual channel ABS.