This is part of the government plan to own a completely electric fleet by 2030 in order to cut oil imports as well as emission levels. This means that the electric Tata Tigor will be available for government use only for the time being. 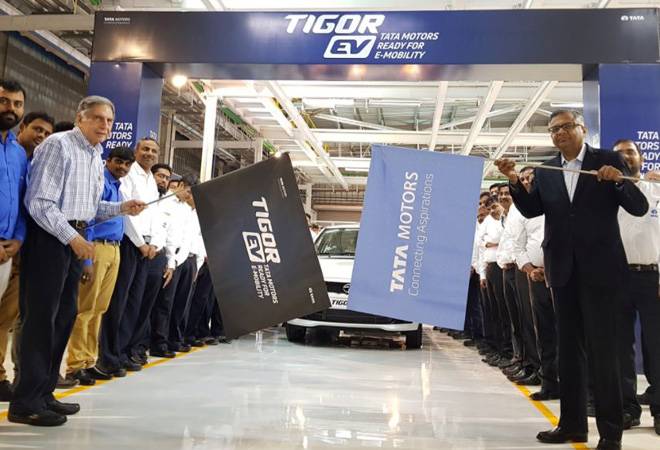 Tata Motors on Wednesday rolled out the electric version of its 'styleback' Tigor at the the Sanand manufacturing facility in Gujarat today. While Tata Group's Chairman Emeritus Ratan Tata and Chairman N Chandrasekaran flagged off first batch, Tata Motors CEO Guenter Butschek drove off the first Tata Tigor EV. This batch is meant for the Energy Efficiency Services Limited (EESL).

Tata Tigor was introduced by the company back in March this year. The vehicle is based on the same platform as Tata Tiago but with the addition of a boot. The petrol and diesel versions of the car are priced between a range of Rs 4.65 lakh to Rs 7.09lakh (ex-showroom). The price tag on the non-electric Tata Tigor goes up to Rs 7.1 lakh. The prices for e-Tigor are expected to come down once the car is released in open markets.

The first batch of Tata Tigor EVs is part of the first 350 orders under the first phase of the order for 10,000 electric sedans placed by EESL earlier this year. Tata Motors is expected to deliver a total of 250 cars in the first phase for which it has already received the letter of agreement. The same for 100 more units is in the pipeline and will soon be issued by EESL, the company said in a statement.

Tata Motors became the L1 bidder (lowest bidder) for the EESL order of 10,000 electric cars, by outbidding Mahindra by Rs 2.3 lakh, and will supply the bulk of the order to government of India during a period of two years. The toughest competition for the Tata Tigor EV will also be from the Mahindra eVerito.

This is part of the government plan to own a completely electric fleet by 2030 in order to cut oil imports as well as emission levels. This means that the electric Tata Tigor will be available for government use only for the time being. We might reportedly catch a glimpse of the e-Tigor meant for open markets in the Auto Expo 2018 next year.

Tata Motors had reportedly quoted a price of Rs 10.16 lakh for the every unit of Tata Tigor EV to the government, excluding GST. Factoring in GST takes the final price of the vehicle goes over Rs 11 lakh.

"As we work together to build the future of e- mobility, I am confident that our customers will respond very favourably to this electric model," Chandrasekaran said at the event.

The electric engine on Tata Tigor EV is can 39.95 hp, a bit more docile than the 113 hp seen on the Tata Tiago EV. The dimensions have been kept changed from the usual Tigor, though. Tata Motors has developed the electric powertrain on the Tigor EV with Electra EV, a firm which deals with every aspect of electric mobility solutions. Reports suggest that Tata and Electra are working for an electric powertrain for Tata Nano which will be launched for cab fleets later.

Tata Motors will be supplying shells of Tata Nano to Coimbatore-based Jayem Automotives, which will then complete the rest of the car. The smallest car will not have any Tata branding and will make its comeback with the name Jayem Neo. Just like the first batch of e-Tigors, the electric avatar of Tata Nano will not be available to masses right away and will be deployed as part of the Ola fleet in Delhi-NCR.