Puri, who was at the helm of the bank for 26 good years, is often credited for transforming HDFC (Bank) into one of the biggest private sector lenders in India 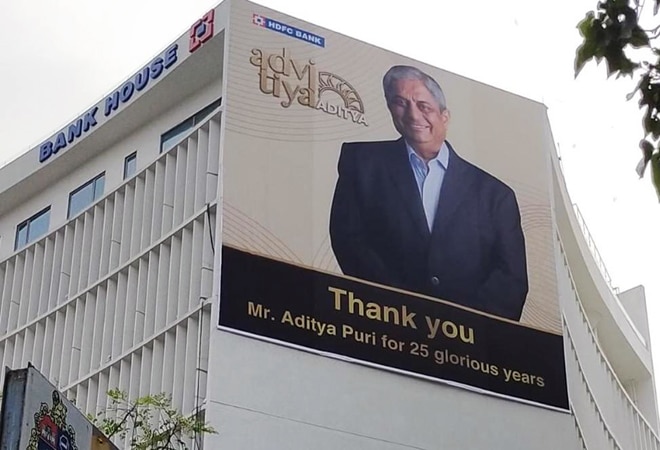 To express its gratitude to the 70-year-old banker, HDFC has put out a gigantic wall hanging outside its headquarter building in Worli, Mumbai

HDFC Bank Managing Director and Chief Executive Officer Aditya Puri, who is set to retire on October 26, is not going to be forgotten easily, especially by the private sector lender's management and staff alike.

To express gratitude to the 70-year-old banker, HDFC Bank put out a gigantic wall hanging outside its headquarter building in Worli, Mumbai. Puri, who was at the helm of the bank for a good 25 years, is often credited with transforming HDFC (Bank) into one of the biggest private-sector lenders in India.

Over 1 lakh employees of the bank will reportedly congregate virtually to bid adieu to the outgoing CEO. Several teams at the bank are believed to be working relentlessly to ensure a decorous farewell .

The farewell will pave the way for Sashidhar Jagdishan to assume command of the private sector lender on October 27.

Currently serving as Additional Director and Head of Finance and HR at the bank, Jagdishan was among the top two internal candidates for the top job at HDFC (Bank). Kaizad Barucha, who has the highest board experience, was the senior-most candidate in the fray.

Although Jagdishan is a seasoned finance executive who has been at the bank for around the same duration as Puri (25 years), matching up against a tall order as that of Puri would be an onerous challenge for him (Jagdishan).

Puri's legacy is outstanding. The organisation he has structured over the years has not only grown leaps and bounds but has also established an image of a bank that consistently delivers.