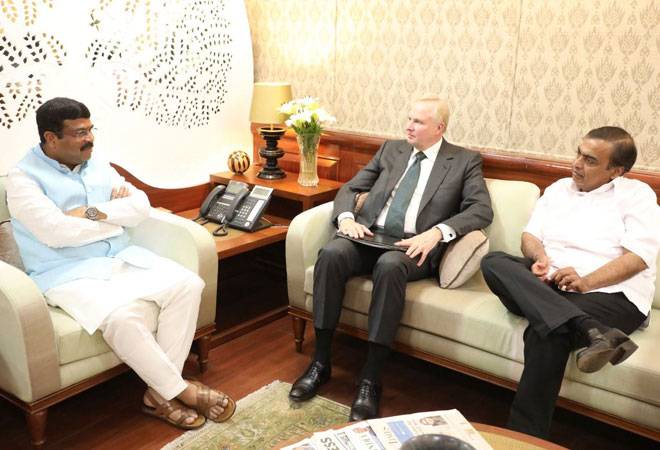 Here are the LIVE updates:

While RIL already has a fuel retailing license and has some 1,400 petrol pumps on the ground, BP last year got approval to set up petrol pumps in India.

"Received CEO of BP Bob Dudley & RIL Chairman Mukesh Ambani. BP and RIL have invested in KG Basin. Invited them to invest in retail as well," Pradhan said in a Twitter post after an 80-minute meeting with the partners.

RIL and BP are partners in oil and gas exploration but have no such collaboration in downstream fuel retailing business.

BP is the tenth player to enter the lucrative fuel retailing business that is seeing double digit growth, not seen anywhere in the world.

Last evening at an industry event, Pradhan had stated that BP as also Haldia Petrochemicals Ltd have been given nod to set up petrol pumps.

RIL and BP are partners in four oil and gas blocks, including the flagging KG-D6 gas block. BP holds 30 per cent interest in the block operated by RIL.

For a licence to retail auto fuels petrol, diesel and ATF, a company should have invested a minimum of Rs 2,000 crore in exploration or production of oil and gas, oil refining, gas or product pipeline or terminals leading to additionality to the existing assets or creation of new assets in the eligible activities.

BP, which had in 2011 bought 30 per cent interest in 21 exploration blocks of Reliance Industries for USD 7.2 billion, had cited investment of nearly USD 500 million in oil and gas exploration and production for gaining the licence.

India currently has about 59,595 petrol pumps, with public sector firms operating a majority of them.

Private sector operators are limited to Essar Oil and Reliance Industries, which between them have some 4,900 petrol pumps. Royal Dutch Shell operates 85 petrol stations.

Numaligarh Refineries Ltd (NRL) and Mangalore Refineries and Petrochemicals Ltd (MRPL) are late entrants and have six outlets between them.

India is currently the ninth largest aviation market in the world. Its jet fuel market is circa 7.3 million tonnes per annum and is expected to continue to grow at over 8.6 per cent to support the growth of the Indian economy.

Central Bank of India: Five things about another bank on RBI's radar for bad loans