Gujarat International Finance Tec-City (GIFT) is the first smart city being built in Gandhinagar. It so far boasts of modern underground infrastructure and two office blocks. 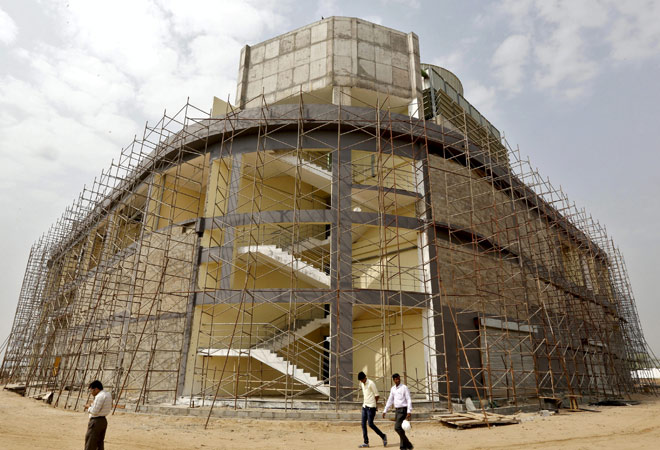 The government's push to accommodate a booming urban population and attract investment rests in large part with dozens of smart cities like the one being built in Gandhinagar on the dusty banks of the Sabarmati river.

So far, the smart city - called Gujarat International Finance Tec-City (GIFT) - boasts of modern underground infrastructure, two office blocks and not much else.

The plan, however, is for a meticulously planned metropolis complete with gleaming towers, drinking water on tap, automated waste collection and a dedicated power supply - luxuries to many Indians.

With an urban population set to rise by more than 400 million people to 814 million by 2050, the country faces the kind of mass urbanisation only seen before in China, and many of its biggest cities are already bursting at the seams.

Ahead of his election in May, 2014, Prime Minister Narendra Modi promised 100 so-called smart cities by 2022 to help meet the urban-rush.

At an estimated cost of about US $1 trillion (estimates from consultants KPMG), the plan is also crucial to Modi's ambition of attracting investment while providing jobs for the million or more Indians who join the workforce every month.

The Prime Minsiter's grand scheme, still a nebulous concept involving quality communications and infrastructure, is beginning to take shape outside Gandhinagar, capital of the state of Gujarat, with the first "smart" city the government hopes will provide a model for India's urban future.

"Most (Indian) cities have not been planned in an integrated way," said Jagan Shah, director of the National Institute of Urban Affairs which is helping the government set guidelines for the new developments.

Among the challenges to getting new cities built or existing cities transformed is the lack of experts who can make such huge projects work and attracting private finance.

"To get the private sector in, there is a lot of risk mitigation that needs to happen because nobody wants a risky proposition," he told Reuters, stressing the need for detailed planning.

To build smart cities, the government allocated Rs 6,000 crore (US $962 million) in the Union Budget for the financial year that started April 1, 2015, even as it spent just a fraction of FY15's allocation of Rs 7,060 crore, said Shah.

EXCLUSIVE:What lies ahead for the govt's 100 smart cities dream

GIFT city, as the smart city is called, will double up as a financial hub, with tax and other breaks to lure banks, brokerages and other businesses.

Developed in partnership with IL&FS Engineering and Construction, it aims to compete with the country's own financial capital (Mumbai) as well as overseas rivals like Dubai and Singapore.

Pressure on existing domestic urban centres is already intense, with cities like Mumbai gridlocked by traffic and hampered by poor infrastructure and a lack of amenities like parks and effective public transport.

Yet some experts believe that building new cities may not be the answer to the country's swelling urban population.

"To address India's urbanisation challenge we have to start looking at our existing cities," said Shirish Sankhe, director at consultant McKinsey and Company, India.

Sankhe added that new cities would be only a small part of the solution relative to brownfield projects.

The country has built planned cities in the past, including Chandigarh, designed by French architect Le Corbusier, and Gandhinagar itself. But the scale of its current push is unprecedented.

A bird's eye view from atop one of the two office buildings on the 886-acre GIFT site, a venture which began when Modi was chief minister of Gujarat, shows little sign yet of the Rs 900 crore spent on the first phase.

But the sandy plain hides infrastructure including an underground tunnel for utilities, a first in the country.

WHAT MAKES A CITY "SMART"?

The government has yet to decide what exactly will make a city "smart", but the programme is expected to include building new centres as well as adapting existing ones.

A detailed definition with guidelines is due soon, said the National Institute of Urban Affairs' Shah.

Existing cities like Dholera and Surat in Gujarat, and Visakhapatnam in the east, have already begun work to transform into smart cities with help from companies such as Microsoft Corp, IBM and Cisco Systems.

Beyond GIFT, greenfield projects are likely to face hurdles including land acquisition rights and lengthy approval processes, as well as finding the right location.

GIFT has the advantage of being flanked by a river on one side and a national highway on the other, and also sits between Gujarat's political capital of Gandhinagar and its business hub of Ahmedabad, with a large international airport.

The key, experts say, is time.

"Physical masterplanning takes time. Complexity is built into this. And my sense is it is probably going to take longer than what most people think," said McKinsey's Sankhe.

India may go to WTO against EU over drug trials: GVK