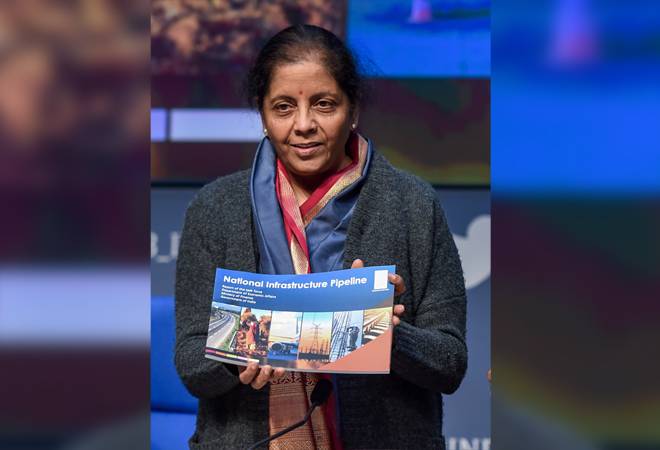 As part of its plan to spend Rs 100 lakh crore on infrastructure sector across the country by 2024-25, the government has already started work on projects worth Rs 42.7 lakh crore, says a report by the Task Force constituted to draw up the National Infrastructure Pipeline (NIP) for each financial year between 2019-20 and 2024-25.

Briefing the media on the progress of the projects, finance minister Nirmala Sitharaman said that based on the information compiled as on date, total project capital expenditure in infrastructure sectors in India during 2019-2020 to 2024-2025 is projected at over Rs 102 lakh crore.  She further said that the government expects to receive another Rs 3 lakh crore worth proposals over the next week.

These projects are spread across 21 ministries and 18 states. The finance minister said that projects of certain states, which are yet to communicate their pipelines, would be added to the pipeline in due course.  Large states that are yet to provide adequate data are Gujarat, West Bengal, Rajasthan and Bihar.

The projects would be largely in sectors such as Energy (24 per cent), Roads (19 per cent), Urban (16 per cent), and Railways (13 per cent). The Centre (39 per cent) and states (39 per cent) are expected to have equal share of the capital expenditure to be undertaken in the infrastructure sector, followed by the private sector (22 per cent).

In order to achieve the GDP of $5 trillion by 2024-25, the government has envisaged investment of about $1.4 trillion (Rs 100 lakh crore) over these years on infrastructure. To achieve this objective, a Task Force was constituted to draw up the NIP for each of the years from 2019-20 to 2024-25 with the approval of the Finance Minister. The Task Force is chaired by Secretary, DEA with CEO (NITI Aayog), Secretary (Expenditure), Secretary of the Administrative Ministries, and Additional Secretary (Investments), DEA as members and Joint Secretary (IPF), DEA as Member Secretary.