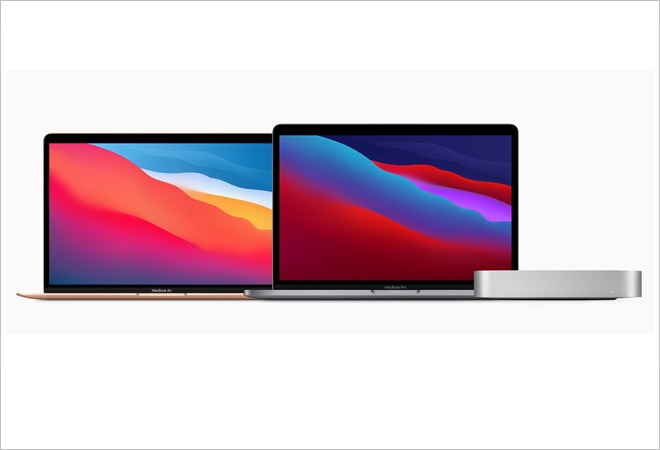 "The introduction of three new Macs featuring Apple's breakthrough M1 chip represents a bold change that was years in the making and marks a truly historic day for the Mac and Apple. M1 is by far the most powerful chip we've ever created, and combined with Big Sur, delivers mind-blowing performance, extraordinary battery life, and access to more software and apps than ever before. We can't wait for our customers to experience this new generation of Mac, and we have no doubt it will help them continue to change the world," says Tim Cook, Apple's CEO

The most popular of the Mac range, the 13-inch MacBook Air notebook with M1 chip, will have the power to do everything - from editing family photos to exporting videos for the web. It will have an 8-core CPU that can perform up to 3.5x faster than the previous generation. With up to an 8-core GPU, graphics will be up to 5x faster and even graphics-intensive games can run at significantly higher frame rates. ML workloads are up to 9x faster, so apps that use ML-based features like face recognition or object detection can do so in a fraction of the time. The M1 chip's storage controller and latest flash technology deliver up to 2x faster SSD performance.

MacBook Air also has a fanless design, which operates silently and will have up to 15 hours of wireless web browsing and up to 18 hours of video playback - the longest battery life ever on MacBook Air. With its sleek wedge-shaped design, retina display, and magic keyboard, the new MacBook Air starts at Rs 92,900 and Rs 83,610 for education.

Used by students and professionals across the world, even the MacBook Pro 13-inch has the new M1 chip onboard. It comes with an 8-core CPU with active cooling system, which will be up to 2.8x faster than the previous generation, delivering enhanced performance when compiling code, transcoding video, editing high-resolution photos, and more. The 8-core GPU is up to 5x faster, for smooth graphics performance. Apple claims 3 ML is up to 11x faster, and for on-device ML tasks that use the Neural Engine, the new 13-inch MacBook Pro is now the world's fastest compact pro notebook. The machine will offer up to 17 hours of wireless web browsing and up to 20 hours of video playback. Featuring Secure Enclave in M1 and Touch ID, it features two Thunderbolt ports with USB 4 support to connect to more peripherals than ever priced at Rs 1,22,900, and Rs 1,10,610 for education.

Featuring a compact design, with M1, the Mini will bring an 8-core CPU with up to 3x faster performance than the previous generation onboard. An 8-core GPU will deliver up to a massive 6x increase in graphics performance, allowing Mac mini to tackle performance-intensive tasks like complex 3D rendering with ease. ML workloads also take a quantum leap forward with up to 15x faster performance over the previous generation. And when compared to the best-selling Windows desktop in its price range, the Mac Mini is just one-tenth the size, yet delivers up to 5x faster performance. Priced at Rs 64,900, the Mac Mini features an advanced thermal design, Wi-Fi 6 for faster wireless performance and the Secure Enclave in M1 for best-in-class security. All the three will run macOS Big Sur, the latest version of Mac's advanced desktop operating system.

WhatsApp launches disappearing messages feature; all you need to know