Samsung Galaxy Note 10, Galaxy Note 10 Plus launched: The third flagship of the year focuses on blending premium design with powerful performance and enhanced productivity tools with the new S Pen Samsung Galaxy Note 10, Galaxy Note 10 Plus: The third flagship of the year from Samsung, after Galaxy S10 series and Galaxy Fold, is said to be inspired by a generation that flows seamlessly between work and life.

Samsung has come out with not just one but two new Galaxy Note 10 smartphones. This year's Samsung Galaxy Unpacked Event saw the launch of regular size Note 10 housing 6.3-inch display and Note 10 Plus, with a massive 6.8-inch screen. The third flagship of the year from Samsung, after Galaxy S10 series and Galaxy Fold, is said to be inspired by a generation that flows seamlessly between work and life. The new series focuses on blending premium design with powerful performance and enhanced productivity tools with the new S Pen. The new Galaxy Note will be available in India on August 23rd, the same day as the global release date.

"From the very beginning, the Galaxy Note has stood for the best-of-the-best technologies and features. The Galaxy Note10 re-imagines this promise for the modern Note fan who uses their smartphone to take their productivity and creativity to the next level, and who effortlessly flows between ideas and endeavors at a moment's notice," says DJ Koh, President and CEO of IT & Mobile Communications Division, Samsung Electronics. "Every element of the Galaxy Note10 was designed to help users achieve more. Whether they're finishing a big project for work, capturing and editing a video, or playing their favourite mobile game, the Galaxy Note10 will help them do it faster and better," added Koh. 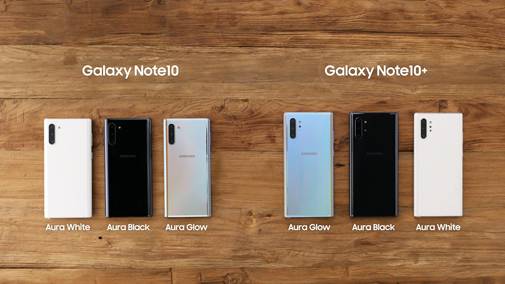 Display: For Note 10 series, it's near bezel-less edge-to-edge Cinematic Infinity Display. Unlike the punch-hole towards the side on the Galaxy S10, the in-display cut out for the front camera is small and has been centred for a balanced design. The Dynamic AMOLED display comes with HDR10+ certification and Dynamic Tone Mapping, featuring wide colour range. The Eye Comfort display is said to reduce blue light without affecting colour quality for comfortable viewing.

S-Pen: For all these years, what makes the Galaxy Note series stand apart is the productivity along with the S-Pen functionality. This year's Galaxy Note10 features a re-designed, uni-body S Pen. Users will be able to jot down notes, instantly convert their handwriting to digital text in Samsung Notes, and export it to a variety of different formats, including Microsoft Word. Samsung says users will be able to customize notes by shrinking, enlarging, or changing the colour of the text. The Galaxy Note10 builds on the Bluetooth Low Energy-enabled S Pen capabilities (introduced on the Galaxy Note9) by adding Air actions, allowing users to control certain aspects of the device using gestures with the S Pen.

Productivity: Build on the secure Knox platform, the Galaxy Note10 series extends Samsung DeX's capabilities, making it easier for users to work between their phone and a PC or Mac. With a simple, compatible USB connection, users can drag and drop files between devices, and use mobile apps with a mouse and a keyboard. The Galaxy Note10 also integrates Link to Windows directly into the Quick Panel. With one click, users can connect to their Windows 10 PC and view notifications, send and receive messages, and review recent photos without pausing to look down at the phone.

Gaming: Powered by 7nm 64-bit Octa-core processor, Samsung claims to have housed the world's slimmest vapour chamber cooling system, which is supposed to deliver optimal performance during gameplay. There is also an AI-based Game Booster for optimizing performance and power consumption during gaming. And with the PlayGalaxy Link P2P streaming service, users can pick up where users left off on any PC game and enable them to continue playing on the move with no need for local storage.

Camera: In the Galaxy Note10, Live focus video adds depth-of-field adjustments so that a user can blur the background to focus on the subject. Zoom-In Mic amplifies the audio and pushes background noise aside. For removing bumps and shakes, there is an improved Super steady feature that stabilizes footage and is accessible in Hyperlapse mode for steady time-lapse videos. Galaxy Note10 also integrates bleeding-edge AR and 3D capabilities into the camera. Samsung has introduced Night Mode in front camera too, allowing users to take great selfies In dim or dark conditions.

Galaxy Note 10 Plus: This elder sibling houses a 6.8-inch Quad HD+ (3040x1440p) Dynamic AMOLED Infinity-O Display with HDR10+ Certified. Measuring 7.2 x 162.3 x 7.9mm, it weighs 196 grams. Other than the display, another big highlight is the quad-camera setup at the rear featuring 16MP ultra-wide sensor along with a 12MP wide-angle, 12MP telephoto and a VGA depth vision camera. With 3D Scanner, a first for the Samsung Note series, the DepthVision camera can scan an object and instantly turn it into a movable 3D rendering. At the front Galaxy Note 10 Plus is the 10MP camera. The Plus variant will have 12 GB of RAM with two storage options - 256GB and 512GB. The LTE variant of the phone has Dual SIM (Hybrid) -- one Nano-SIM and one Nano SIM or one MicroSD slot (up to 1TB). For the 5G variant, there will be a single Nano-SIM slot and one micro SD (with up to 1TB).

Galaxy Note 10: The Note 10 will have a comparatively smaller display measuring 6.3-inch FHD+ Dynamic (2280x1080p) AMOLED Infinity-O Display with HDR10+ Certified. Measuring 71.8 x 151.0 x 7.9mm, this one weighs 168g. Unlike the Plus, this one has a triple camera rear setup -16 MP ultra-wide sensor along with 12 MP wide-angle and 12 MP telephoto lens. The LTE version of the phone will feature two Nano-SIM slots while the 5G variant will have just one Nano-SIM slot. Note 10 will be available in two variants -- 8GB RAM with 256GB internal storage (LTE model only) and 12GB RAM with 256GB internal storage (5G model only).